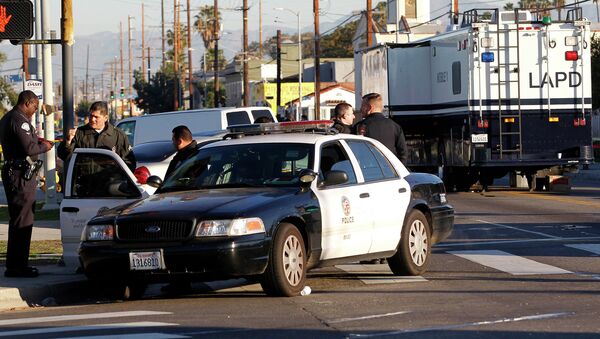 © AP Photo / Nick Ut
Subscribe
International
India
Africa
The Los Angeles Police Department (LAPD) has no intention to increase the use of the US government's surplus military equipment and is not interested in using heavy equipment and munitions, LAPD Public Information Director Josh Rubenstein told Sputnik.

Trump's Militarization of Police Evokes Violent Ghost of Ferguson
WASHINGTON (Sputnik) — "The Los Angeles Police Department has no intention of increasing our military surplus footprint," Rubenstein said on Tuesday. "We are not interested, nor have we ever wanted to utilize grenade launchers, tanks, or heavy munitions in the policing of Los Angeles."

Rubenstein said the 1033 program is used by LAPD primarily to replace the aging surplus equipment it has used for many years, but added that the department remains compliant with Obama's 2015 executive order.

"The 1033 program does allow the Los Angeles Police Department the ability to replace aging equipment that we have owned for years and complies with the 2015 Presidential Executive Order," Rubenstein said. "Most of the equipment we have attained through the 1033 program consists of helmets, goggles, Ready to Eat Meals, etc."

The LAPD's most important asset is its community policing and ability to communicate effectively with the public and communities, Rubenstein said.

The Defense Department program, which began in 1990, has provided more than $5.4 billion in military gear and equipment to state and local police, Attorney General Jeff Sessions said earlier this week.