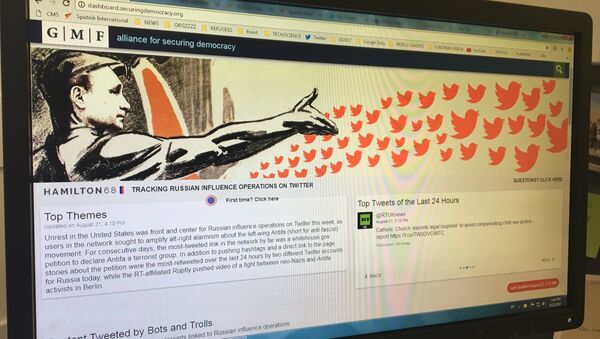 © Sputnik
Subscribe
Two notable US media outlets ended up quarreling because of a new 'Russian propaganda tracker' known as Hamilton 68.

Earlier in August the US-funded German Marshall Fund’s (GMF) Alliance for Securing Democracy launched the Hamilton 68 dashboard – a website that is supposed to track Russian "propaganda" and "fake news" on Twitter.

But while its effectiveness at ferreting out propaganda appears to be questionable at best, Hamilton 68 has already managed to, albeit inadvertently, drive a wedge between two notable US media outlets – USA Today and Gateway Pundit.

USA Today also argued that on that day the aforementioned websites carried a range of stories that "reflect themes promoted by the Russian network."

Jim Hoft, founder of Gateway Pundit who previously argued that the Alliance for Securing Democracy dashboard’s real goal is to "smear websites supportive of Donald Trump and his accomplishments as Russian propaganda", was not amused by this move.

In an article titled "USA Today Smears Gateway Pundit as ‘Alt-Right Website’ Linked to Russia Because They Want Us Dead", Hoft retorted that by defining Breitbart and The Gateway Pundit as "alt right",  the "far left" are deliberately attempting to paint these outlets as political targets.

"By defining us as Alt-Right they are hoping we get the same beat-down and abuse as we’ve seen at dozens of Trump rallies this past year by the alt-left," Hoft wrote.

Meanwhile James Carden, executive editor for the American Committee for East West Accord, was cited in the USA Today article as saying that while it is "a legitimate thing" to try and determine how Russia may be influencing the US political discourse, "Russian sites on the tracker also report on legitimate stories."

"It seems that anything critical of the United States is now all of a sudden Russian propaganda. That’s a slippery slope," Carden warned.

000000
Popular comments
The neo-Marxian Left's success in weaponising resentment has had enormous ramifications throughout western societies, including in the media. Nowadays only true conservatives still tend to understand and deal with "losing" as a proper part of their own personal responsibilities, and tend to avoid letting resentment arise and cloud their judgment and decision-making. Pretty much everyone else is always ready now with the classic childish reactions to losing: "it's not fair" and "it's not my fault". And what's worse, they expect to be believed AND expect punishment and vilification of those who "caused" their resentment in the first place. Today's western MSM are painfully aware of the steady erosion of their traditional power of configuring public opinion, and typically are now jumping on the "it's not fair" and "it's their fault, not ours" bandwagon on their own account. And one might think they'd be good at it, given that they've been busy for decades teaching the masses how weaponised resentment works. So it's amusing to see that these efforts of MSM (including "Jesuit"-like agencies such as Hamilton 68) on their own account are so transparent and easily "deconconstructable".

John Twining
25 August 2017, 22:18 GMT
000000
Newsfeed
0
New firstOld first
loader
LIVE
Заголовок открываемого материала
Access to the chat has been blocked for violating the rules . You will be able to participate again through:∞. If you do not agree with the blocking, please use the feedback form
The discussion is closed. You can participate in the discussion within 24 hours after the publication of the article.
To participate in the discussion
log in or register
loader
Chats
Заголовок открываемого материала
Worldwide
InternationalEnglishEnglishMundoEspañolSpanish
Europe
DeutschlandDeutschGermanFranceFrançaisFrenchΕλλάδαΕλληνικάGreekItaliaItalianoItalianČeská republikaČeštinaCzechPolskaPolskiPolishСрбиjаСрпскиSerbianLatvijaLatviešuLatvianLietuvaLietuviųLithuanianMoldovaMoldoveneascăMoldavianБеларусьБеларускiBelarusian
Transcaucasia
ԱրմենիաՀայերենArmenianАҧсныАҧсышәалаAbkhazХуссар ИрыстонИронауОssetianსაქართველოქართულიGeorgianAzərbaycanАzərbaycancaAzerbaijani
Middle East
Sputnik عربيArabicArabicTürkiyeTürkçeTurkishSputnik ایرانPersianPersianSputnik افغانستانDariDari
Central Asia
ҚазақстанҚазақ тіліKazakhКыргызстанКыргызчаKyrgyzOʻzbekistonЎзбекчаUzbekТоҷикистонТоҷикӣTajik
East & Southeast Asia
Việt NamTiếng ViệtVietnamese日本日本語Japanese俄罗斯卫星通讯社中文（简体）Chinese (simplified)俄罗斯卫星通讯社中文（繁体）Chinese (traditional)
South America
BrasilPortuguêsPortuguese
NewsfeedBreaking
07:48 GMT'Impossible': Baghdad Politician Explains Why Iraq and Israel Are Nowhere Close to Normalising Ties
07:46 GMTR. Kelly's Negative Net Worth Grabs Attention on Twitter: 'How He's Gonna Pay the Lawyers?'
07:24 GMTMacron: Greece to Buy Rafale Jets, Three Frigates From France in Deal 'Boosting EU's Independence'
06:54 GMTHikers Find Live Nazi Grenade From World War II Near Swedish Ski Resort
06:48 GMTScania Scandal: Swedish Carmaker Investigated for Bribery Over Deal With Indian Minister
06:37 GMT25 Injured After Explosion in Residential Building in Gothenburg, Sweden, Reports Say
06:13 GMTGerman Chancellor Candidates in Focus as Tough Coalition Talks Loom
05:53 GMTBrexit to Blame: Germany's Olaf Scholz Says 'End to Freedom of Movement' Fueled UK Petrol Crisis
05:37 GMTUK Motorist Runs Over 'Knife-Wielding' Man Amid Alleged Petrol Dispute - Video
05:23 GMTPatriarchy Strikes Back? Iceland's Historic Female-Majority Parliament Up in Smoke After Recount
04:43 GMTUS Marine Colonel Put in Brig For ‘Asking for Accountability’ Over US Departure From Afghanistan
04:03 GMTWitness Who Claims She Saw Prince Andrew Dancing With Giuffre at Club to Testify in Court - Report
03:24 GMTBennett Claims He Said 'No Three Times’ to President Biden During Their August Meeting
03:16 GMTRepublicans Slam DHS Chief Mayorkas for Allowing Thousands of Haitians Into US
01:37 GMTUS ‘Humiliated Like Never Before’, Trump Says, After DHS Allowed Thousands of Migrants to Pour in
01:31 GMTLockheed Martin to Build US Army’s Next Generation Tactical Vehicle Based System
01:10 GMTBorder Patrol Agents Disgruntled Over Biden's Attempts to Throw Them 'Under the Bus' - Report
00:53 GMTBeard-Check: Afghan Barbers Banned From Shaving, Trimming Beards - Reports
00:27 GMTR. Kelly Found Guilty: Will Artist Be Removed From Music Services?
00:03 GMTIs Sir Alex Ferguson Right, That Ronaldo, and not Messi, Could Score a Hat-trick for Anyone?