Chimpanzees Adapt to Challenges Better Than US Policymakers on Afghanistan 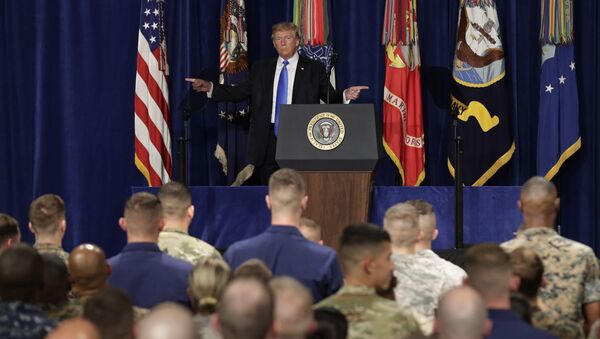 © REUTERS / Joshua Roberts
Subscribe
Trump's administration has shown less intelligence and adaptability than chimpanzees in developing their latest strategy for Afghanistan, according to analysts.

WASHINGTON (Sputnik) — President Donald Trump and his top generals are not flexible enough to develop the strategy to win the 16-year-long war in Afghanistan, US analysts told Sputnik.

On Monday, President Donald Trump announced a new US strategy for Afghanistan and pledged to wage war more vigorously than his predecessors against the Taliban and other Islamist groups.

Why US Troops Increase Unlikely to Boost Afghan Settlement in Short Term
However, Trump and his generals made no real changes to a strategy that had failed under the two previous presidents, University of Pittsburgh Professor of International Affairs Michael Brenner said on Tuesday.

"The brutal truth is that US leaders – civilian and military – have shown less behavioral adaptation in Afghanistan than one likely would see in a chimpanzee confronting analogous frustrating circumstances," he said.

Trump and his policymakers were just reverting to strategies that had already been tried and failed, whereas chimpanzees in experiments repeatedly show the ability to learn new ways to approach and solve problems, Brenner explained.

"The chimp would either try a divergent course or say the hell with it and go off to eat a banana, i.e. devalue the stakes," he said.

The strategy that Trump had announced on Monday was nothing more than a call for persistence in reapplying the same measures that have brought no successful outcome over the previous decade and a half, despite trillions of dollars in expenditures and the loss of many lives, Brenner noted.

"Yet another tack taken by linear thinkers to avoid confronting the full implications of their limitations is the insistence on ‘another try.’ Fail in Afghanistan? Go back time after time in the hope that persistence will pay off," he observed.

However, that approach to the conflict is not based on any realistic assessment, but only on the blind hope that ruthless determination can sweep aside all other factors, Brenner cautioned.

"That persistence has little to do with cool-headed determination of the objective’s importance. Nor is it justified on the grounds that the fly in the ointment… that doomed previous efforts has been… removed. Rather, it is an expression of a primitive belief in the ultimate triumph of the will," he said.

Trump’s determination to remain in Afghanistan reflects a blind spot that had been repeatedly displayed by US policymakers, Brenner explained.

"That is an attitude that fits well the deeply rooted American ‘can-do’ spirit. And that failure is not an acceptable word in the American lexicon," he said.

Ex-Aid Chief: US Wants to Kill ‘All’ Taliban at Expense of Building Afghan State
Trump has swallowed assurances provided by his top generals and intellectuals who have come up with and championed an entire generation of failed military interventions and policies over the previous two administrations, Brenner recalled.

"How should we assess the new strategy the president unveiled last night? Trump was rolled by the Pentagon brass and the neo-cons. There was no one else arguing against them — with [White House strategist Steve] Bannon's departure," he said.

Trump has not trusted his own instincts, though he has repeatedly expressed in the past that the war in Afghanistan could not be won, Brenner pointed out.

The US president "himself is a complete ignoramus — but knows instinctively that what we are doing is senseless — ask any 10-year-old child," he said.

Trump’s military advisers had no higher vision than determination to avoid being blamed for losing an unwinnable war, Brenner commented.

"The military just wants to keep the game going, avoid being stigmatized for defeat after the enormous costs, and they are strategically brain dead," he said.

There was no possibility of Trump’s new strategy succeeding, Brenner concluded.

"Does it make any real difference? Can it work? No! No!" he said.

US UNABLE TO ACHIEVE MILITARY VICTORY IN AFGHANISTAN

Additional US Troops to Arrive in Afghanistan Quickly as New Strategy Unveiled
University of Illinois Professor of International Law Francis Boyle agreed that victory was impossible in Afghanistan and that Trump’s new strategy could not deliver it.

"Everyone knows the US War in Afghanistan is lost. Trump just does not want Kabul to fall while he is still president. So he is just treading water until he can pass off Afghanistan to his successor and let Kabul fall on his or her watch," he said.

Trump is now guilty of the same abdication of responsibility that he had accurately blamed on his predecessor, President Barack Obama of, Boyle stated.

"This is exactly what Obama did to Trump. [Sending] 4,000 more troops is just putting a band aid on a hemorrhaging artery and they know it," he said.

The United States needs to acknowledge the political power and credibility of the Taliban and negotiate directly with it, Boyle maintained.

"The only solution here is for the United States to negotiate directly with the Taliban for an orderly US withdrawal from Afghanistan that will reinstall the Taliban government in power," he advised.

It was the administration of President George W. Bush that illegally ousted the Taliban government in the first place by launching a war of aggression against Afghanistan in 2001, Boyle recalled.

"There will be no peace in Afghanistan until that original international crime has been rectified," he said.

Trump has approved a modest increase in the number of US troops serving in Afghanistan.