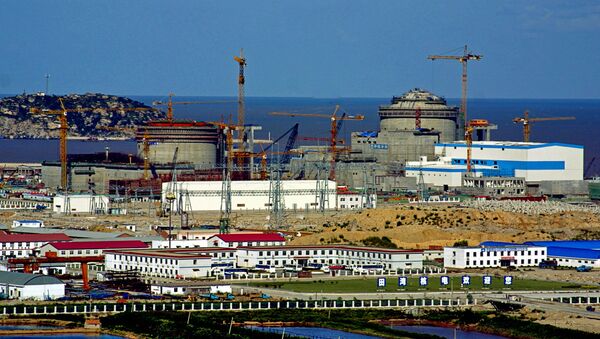 © Sputnik
Subscribe
Commenting on Beijing's desire to see Moscow helping to build a new nuclear power plant in China, a Russian expert told Sputnik that it is Russia's unique technologies that prompted Beijing to make its choice.

According to Russian State Atomic Energy Corporation Rosatom, Beijing has invited Russia to take part in the construction of a new nuclear power plant (NPP) in China.

In an interview with Sputnik, Sergei Kondratyev of the Moscow-based Institute of Energy and Finance said that it is only natural that China gives preference to Russian technologies.

"The competition in this market is quite tough despite the fact that there are not many global players [in this sector]. Therefore, there is a serious struggle for new orders. As for Beijing's latest proposal, it is very attractive for Russian suppliers and Rosatom," Kondratyev said.

Russia to Help China Build Plant's Nuclear Fuel Loading System by Next Summer
He recalled that "the company gained good experience in the construction of the Tianwan NPP, one of the best and most modern nuclear power plants in China and East Asia."

Kondratyev added that "China is actively building the NPPs using both American and French technologies" and that Beijing's proposal with respect to Russia "is connected with the trend in China for diversification."

"China would not want to depend solely on Americans and Europeans in this issue. In addition, the technological solutions that Russia offers are really unique in some aspects," he pointed out.

He also recalled that Rosatom was the first to call for the installation of [nuclear fuel] melt traps at the NPPs in order to prevent a repetition of the Fukushima Daiichi nuclear disaster that took place in 2011.

"China is trying to get access to the best technologies in the world, something that in turn helps Russia, one of the leaders in nuclear energy, gain access to the Chinese market," Kondratyev concluded.

The project related to Russia's participation in the Chinese NPP's construction will be overseen by Rosatom's subsidiary for South Asia Projects ASE.

China and Russia agreed to step up cooperation on nuclear energy and border development, but how soon? https://t.co/s6csX5ghEj

RT quoted Andrey Lebedev, vice-president of the company, as saying that Russia will take part in the construction of at least two out of six reactors of the new NPP in China.

Russia and China have a long history of cooperation in the sphere of nuclear energy use for peaceful purposes, with the Tianwan NPP being the largest such joint project.

China-Russia Trade Turnover in July Up 19.4% Year-on-Year
Two NPP's units with VVER-1000 reactors with a capacity of 1,000 MW each were launched in 2007, whereas the construction of the third and the forth units is still underway.

In addition, the possibility of joint construction of units 7 and 8 is already being discussed.

In November 2016, Russia and China issued a joint statement on developing strategic cooperation in the peaceful use of nuclear energy.