Daesh Departs: Lebanon Well on the Way to Reclaiming Lost Land from Al-Nusra 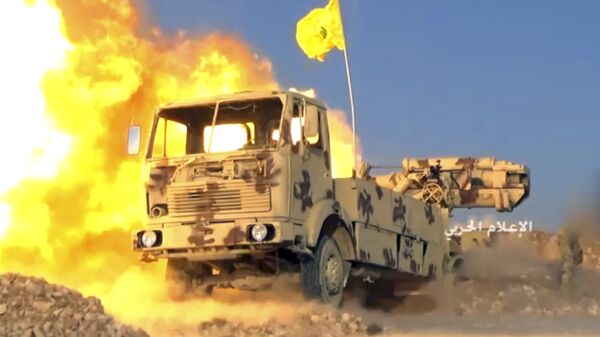 Loud and Clear's Brian Becker interviewed Jana Nakhal, a member of the Lebanese communist party and a graduate assistant at the American University in Beirut.

​"After almost three weeks of fighting, the Lebanese army and Hezbollah freed another piece of land in the northeastern part of Lebanon, which was occupied by [al-Nusra Front]," Nakhal explained.

"What we have seen starting this Saturday is actually an awaited battle against [Daesh's]  occupation of around 120 square kilometers [46 square miles] … we are witnessing a collaboration between these forces of Lebanese army and [Hezbollah] while the [armed branches of the] Communist Lebanese party are supporting the Lebanese army both in military [actions] and by actually setting up field hospitals around the area."

Turning to Syria, Becker brought up comments made during a Sunday speech from Syrian President Bashar al-Assad, who said "the direct support of our friends, politically, economically and militarily, made our advance on the ground greater and the losses of war less. Therefore, they are our partners in these achievements on the road to crush terrorism.".

"Let's be clear. There will be no security cooperation nor opening of embassies or even a role for some countries that say that they want to play a role in ending the crisis in Syria before they clearly and frankly cut their relations with terrorism. At that point maybe we can speak about opening embassies," Assad went on to say.

Assad made no specific mentions of nations in the latter comment, but according to Nakhal he was referring not only to the United States, but also to Saudi Arabia. "Saudi Arabia has the [greatest] role in not only supporting [Islamic terrorists] militarily but most importantly, for me at least, is that the radicalization of the youth and radicalization of our communities has had historical support in both money and ideology from Saudi Arabia."

Nakhal also cast doubt on the stated objectives of the US in the region. "Let's put it this way: Lebanon and Syria were the two countries this side of the world where America never had a military base. Now America has nine or 10 military bases in the northeastern part of part of Syria," said Nakhal. "So I think this is a very telling of what America has been wanting out of that 'intervention' and this area out of its support to the 'revolution' and I do think it is there to stay."

After Israel, Lebanon receives the most per-capita military assistance from the United States than any other nation, to the tune of about $1 billion since 2006.