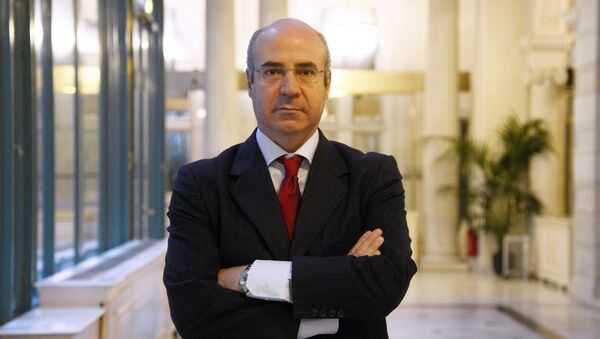 The Magnitsky Act adopted by the Obama administration in 2012 appears to be based on a "legend" created and blown up by US investor William Browder, an email of a State Department intelligence official obtained by unknown hackers says. RIA Novosti author Andrei Veselov conducted a very thorough investigation.

Andrei Veselov (RIA Novosti) — A month ago a group of unknown hackers broke into the private email account of Robert Otto, a US State Department official who works in the secretive intelligence arm of the State Department focusing on Russia.

According to Foreign Policy magazine, the US State Department neither denied nor confirmed the authenticity of the emails.

It turned out that Otto had doubts about the American official version of the Magnitsky case and even considered it a "legend." But at the same time he secretly helped American journalists cover this case and actions related to the Magnitsky Act in the "right way."

His business partner and head of the Hermitage Capital Management investment fund William Browder, who was also accused of tax evasion in Russia and sentenced in absentia to nine years in prison, blamed a group of Russian officials for the death of the auditor.

Largely due to Browder's lobbying efforts the Magnitsky Act — the first anti-Russian sanctions bill since the end of the Cold War — was adopted in the United States in 2012.

However, simultaneously, Browder came under heavy criticism for not providing any credible evidence to prove his claims.

Moreover, Browder was accused of capitalizing on the death of Magnitsky and having vested interests. In addition, the US investor could use those fraudulent schemes which he blamed on others himself.

The case took on a new significance in 2016 when Andrei Nekrasov, a Russian film director, released his documentary entitled "The Magnitsky Act: Behind the Scenes." To the embarrassment of Browder, the film blew apart his version of what had happened to his partner.

Curiously enough, Otto admitted in one of his emails that Nekrasov was "no regime tool"; quite the contrary, the latter was known as a Kremlin critic.

It was hardly surprising that Nekrasov's documentary threw the US investor into panic. Browder did whatever it took to ensure that the film would not be screened in the EU Parliament. 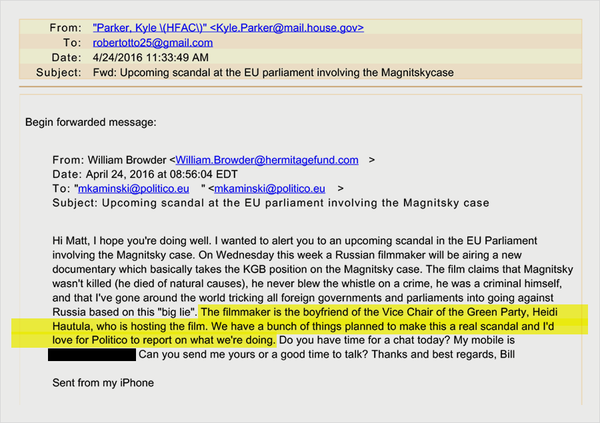 "Hi Matt," Browder wrote to Matthew Kaminski, the executive editor of Politico's European edition. "I wanted to alert you to an upcoming scandal in the EU Parliament involving the Magnitsky case. On Wednesday this week, a Russian filmmaker will be airing a new documentary which basically takes the KGB [sic!] position on the Magnitsky case."

"The film claims that Magnitsky wasn't killed (he died of natural causes), he never blew the whistle on a crime, he was a criminal himself, and that I've gone around the world tricking all foreign governments and parliaments into going against Russia based on this 'big lie,'" Browder wrote.

To divert public attention away from the case, the US investor offered to spin a scandal out of the rumor that the filmmaker was "the boyfriend of the vice chair of the Green Party, Heidi Hautala, who was hosting the film."

"We have a bunch of things planned to make this a real scandal and I'd love for Politico to report on what we're doing," the investor added.

Interestingly enough, the letter somehow ended up in the email account of Kyle Parker, a staffer at the House Committee on Foreign Affairs and was then forwarded to Robert Otto.

Meanwhile, Russian lawyer Natalya Veselnitskaya, the very same one who later met with Donald Trump, Jr., came to the attention of Otto and Browder.

Speaking to RIA Novosti, Veselnitskaya revealed that Browder had orchestrated an all-out campaign in US mainstream media against her. At that time Veselnitskaya defended the Russian merchant Denis Katsyv in the American courts. Browder tried to accuse Katsyv of acting in violation of the Magnitsky Act, which the US investor had championed so successfully.

Probably, the financier coordinated his media strategy with the State Department's Bureau of Intelligence and Research. As one could judge from the correspondence, Browder reported all the initiatives of Veselnitskaya on 'Katsyv's case' to Parker, who redirected the requests, according to the proven scheme, to Robert Otto.

However, the US juridical machine didn't support Browder and dropped all charges against Katsyv, Veselnitskaya said, adding that this decision came as a bolt from the blue to the US financier.

Still, it seems that at some point Otto began to ask himself whether he and his colleagues became part of Browder's "PR machine." 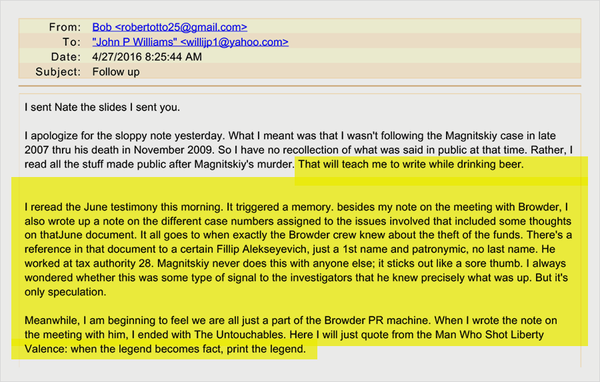 "I am beginning to feel we are all just part of the Browder PR machine," Otto wrote to a person named John P. Williams. "When I wrote the note on the meeting with him, I ended with The Untouchables [a 1987 American gangster film]. Here I will just quote from the Man Who Shot Liberty Valence [a 1962 American Western film]: when the legend becomes fact, print the legend."

Otto's remark is by no means a slip of the tongue and does deserve special attention.

In this classic American western of 1962, Senator Ranse Stoddard wants to tell the truth about a long-standing duel and murder. But his story does not inspire American reporters. As a result, he is convinced: no one needs the truth if there is a beautiful and all-suiting legend in its place. Such a legend becomes the real "truth."

Moreover, in his email to Williams, Otto boasted that he could do a far better job of discrediting the US "official" line on the Magnitsky case than Russian filmmaker Nekrasov.

"The Nekrasov film is so incompetent….. I could do a better job of discrediting the 'official' line," he wrote to Williams. 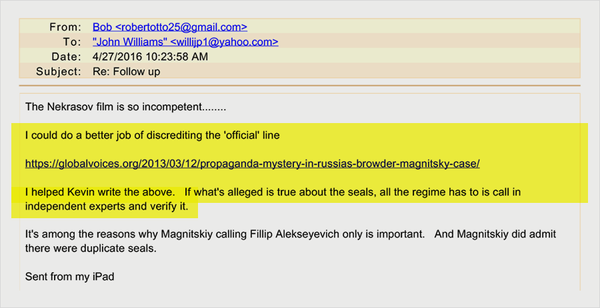 Thus, Otto openly admitted that the Magnitsky Act and sanctions against Russia were adopted on the basis of a "legend" that was created by Browder.