Eyes Wide Shut: How US, UK-Made Toxic Agents Ended Up in Hands of Terrorists 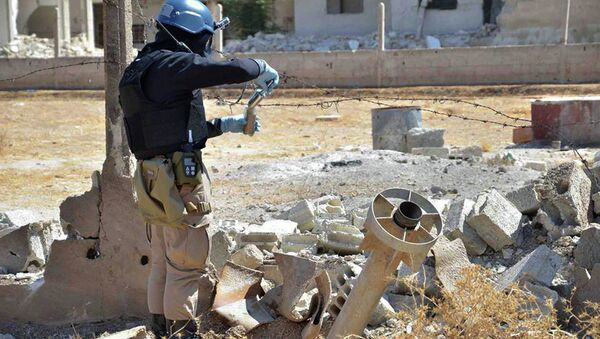 The discovery of toxic agents manufactured by US and UK companies in the territories liberated from terrorists has once again revealed the hypocrisy of the US-led coalition, Ammar Waqqaf, a Middle East expert told Radio Sputnik, adding that it is not the first time jihadists have been spotted using poisonous substances in Syria.

The Syrian Foreign Ministry revealed Wednesday that the US and Great Britain could have been involved in supplying CS and CN toxic agents to extremists in Syria.

As it turns out, the chemical substances found in jihadists' storehouses in Aleppo and eastern suburbs of Damascus were manufactured by British and American companies.

"The chemical munitions were produced by the Federal Laboratories company in the US. The toxic agents were produced by Cherming Defense UK and NonLethal Technologies (US)," Syrian Deputy Foreign Minister Faisal Mekdad told a press conference in Damascus.

Mekdad drew attention to the fact that under the Article 5 of the of the Convention on the Prohibition of Chemical Weapons, the use of the toxic agents is allowed only for preventing civil disorder and prohibited for use in warfare.

The Syrian Foreign Ministry accused the US-led coalition of providing assistance to terrorist organizations in Syria and providing them with prohibited chemical substances.

Radio Sputnik got in touch with Ammar Waqqaf, a Middle East expert, the Founder and Director of the analytical organization Gnosos, asking him to comment on the issue and share his views on what the consequences of the recent disclosure could be.

"In a sense, this is significant because suddenly we now realized that at least a lack of control if not clear intent caused these rebels to have access to toxic agents," Waqqaf told Radio Sputnik.

'Beyond Understanding': Moscow on UK, US Possible Supplies of Chemicals to Syria
"Even though it is likely a low-grade tear gas material still somebody is supplying them [militants] with these canisters containing these gases without really asking what they would do with them and, you know, they [could] develop them even further to produce something even more toxic," the expert pointed out.

Waqqaf underscored that the disclosure shows the hypocrisy of those who are seeking to incriminate the Syrian government for an alleged use of chemical weapons while turning a blind eye to the use of poisonous substances by the so-called Syrian rebels.

"There have been numerous occasions when rebels used clearly toxic gases," Waqqaf said, "There are even videos, for example in Sheikh Maqsood a couple of years ago where Jaish al-Islam used chlorine gas. There was a clear yellow cloud over there, they even admitted it and later denied it. But nobody speaks about all these things." 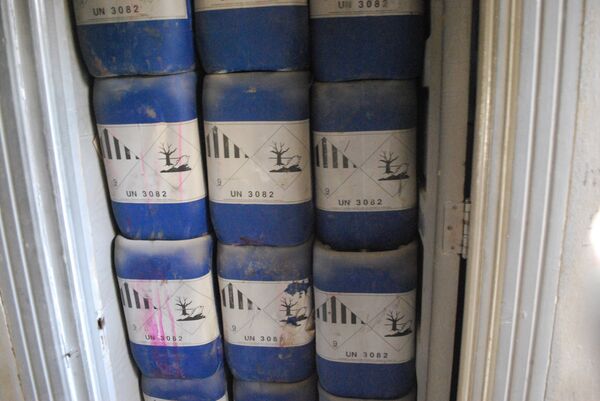 In answer to a question about what consequences the situation will have, particularly for London and Washington, Waqqaf assumed that both the US and UK governments are likely to turn a blind eye to this episode and keep it swept under the rug.

"What consequences will it have?… Nobody [in the US and UK] is even talking about it. It is highly unlikely that they will say anything," the Middle Eastern expert said.

Syria Has Right to Address UN as Alleged Western Chemical Weapons Found - MP
However, if the issue is raised in the UN Security Council with ample evidence presented the US and the UK "might want to respond," Waqqaf highlighted.

In any event, the US and EU are very reluctant to investigate anything that could incriminate the opposition, the expert said, referring to the Khan Sheykhun chemical incident and the unwillingness of the US-led coalition to thoroughly examine the case.

Commenting on the issue Leonid Slutsky, the chairman of the Russian lower house of parliament's International Affairs Committee, told reporters that Damascus has the right to turn to the United Nations after US and UK-made CS and CN substances were found in Aleppo and Damascus suburbs.

"Syria now has all the reasons and the right to address the United Nations over western-produced chemical weapons found in the territories liberated from terrorists," Slutsky stressed.

"The information released by the Syrian Foreign Ministry once more demonstrates in full the hypocrisy of the members of the western US-led coalition, and proves that the entire goal of the whole operation is to remove the regime of President Bashar Assad," the Russian parliamentarian told journalists.