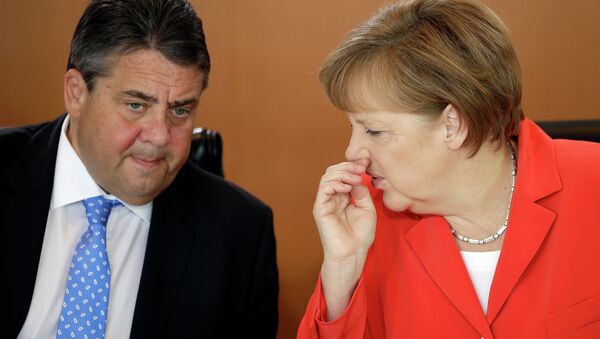 "We should free ourselves from the diabolical logic that armament creates security. This is an idea held by such people as US President Donald Trump. The idea that he wants to impose on his NATO partners. Unfortunately, I am afraid that this is what Angela Merkel plans to do after the elections. To spend billions for arms to make Trump like her. This kneeling has nothing in common with SPD," Gabriel said.

On Monday, Merkel confirmed her intention to increase the volume of Germany's military spending to 2 percent of the country's GDP by 2024 in order to fulfill its commitment under NATO regulations.

Discussions on Europe's defense have become more active following the victory of Donald Trump in the US presidential election, since during his campaign the US leader repeatedly called on other NATO members to reach the defense spending goal, fixed in the 2014 Wales Summit Declaration.

Only six of the 29 NATO members, namely, Estonia, Greece, Poland, Romania, the United Kingdom and the United States, are meeting the target 2 percent of GDP, according to the NATO report on defense expenditure, published on June 29. The United States' contribution is the largest, totaling 3.36 percent of its GDP.