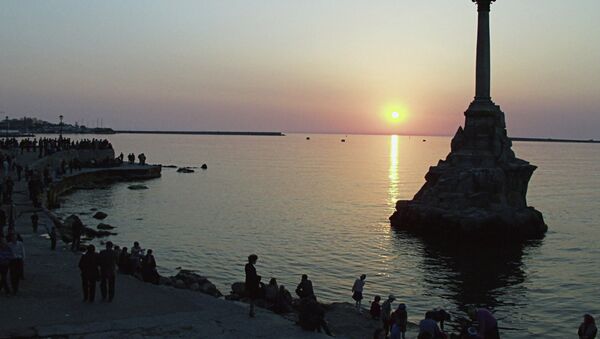 © Sputnik / Dmitry Korobeinikov
/
Go to the mediabank
Subscribe
International
India
Africa
In a remarkable turn of events, a hapless Ukrainian who fell asleep on an inflatable trampoline on a beach in Ukraine, ended up cast adrift in the Black Sea until rescued by Russian border guards in Crimea.

Crimea 'Immortalizes' Fidel Castro's Memory With a Monument
A Russian border guard cutter managed to successfully rescue a 19-years old man who was spotted drifting on an inflatable trampoline in Karkinit Bay off the west coast of the Crimean Peninsula.

After being lifted aboard the ship and receiving first aid, the hapless castaway revealed his name was Mikhail Doroshenko, and that he works as a security guard in a recreation area near the village of Lazurnoye in Ukraine’s Kherson Region, RIA Novosti reports.

According to Doroshenko, one night he fell asleep on an inflatable trampoline on the beach and woke up in the morning to find himself adrift in the sea far away from land.

The hapless Ukrainian ended up spending nearly three days without food and water, coping with extreme heat (about 40 degrees Celsius).

The Russian border guards provided Doroshenko with food and clothing, and delivered him to a hospital in the village of Chernomorskoye in Crimea where he was treated for heat stroke and dehydration.