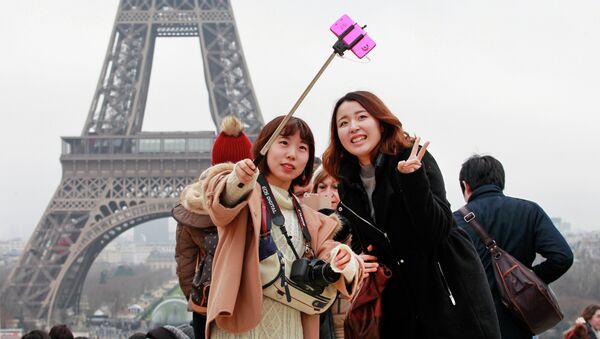 © AP Photo / Remy de la Mauviniere
Subscribe
The number of tourists, visiting France, has increased in the second quarter of 2017, after the significant decline in the aftermath of terrorists attacks in 2015-2016, with the number of tourists' overnight stays in Paris reaching levels of 2015, France's National Institute of Statistics and Economic Studies (Insee) said Tuesday.

"This increase was much sharper than that in the previous two quarters and more than offset the significant decline recorded a year earlier (−5.3%) during the post-terrorist period. Thus, the number of overnight stays exceeded by more than 4% that of the second quarter 2015. This upswing related to both French customers and foreign ones," the institute said.

According to Insee, the particular increase has been recorded in Paris, with the number of overnight stays increasing by 12.6 percent in hostels, and by 27.6 percent in hotels year-on-year. Meanwhile, the number of nights in campsites has reached its historic peak in the beginning of season with 18.7 percent increase.

"In particular, overnight stays of foreign customers increased considerably in the agglomeration of Paris (+16.5%) and reached a similar level to that recorded in 2015," the institute noted.

The terror threat in Europe remains high in the wake of a series of deadly attacks which have occurred over recent years. In November 2015, the Islamic State terrorist group (outlawed in Russia) carried out a series of terror acts across Paris, claiming 130 lives and injuring over 350 people. In July 2016, a truck drove into a large crowd celebrating Bastille Day in the French city of Nice, killing at least 86 people.