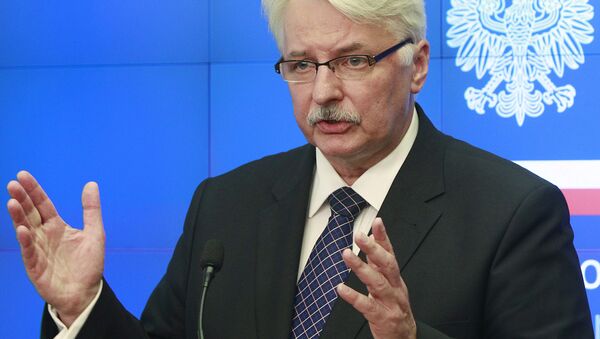 The deployment of NATO servicemen in Poland poses no threat to Moscow's interests, but it is a response to the growing Russia's presence in the region, Polish Foreign Minister Witold Waszczykowski told RIA Novosti in an interview.

Poland to Continue Steps to Cancel EU Move to Grant Gazprom More Access to OPAL
WARSAW (Sputnik) — "It’s a symbol, it’s a token of determination to defend our part of Europe. We joined NATO in 1999, 18 years ago. And for 17-18 years we didn’t have a deployment of NATO troops on the territory of Poland, the Baltic countries and other part of the [Alliance's] eastern flank. Since the beginning of this year we have the deployment of troops," Waszczykowski said.

The minister added that the deployment was a symbol of determination that NATO would protect its part of the alliance, if "any kind of incidents, a Crimea-style incidents' took place on the Polish territory.

"It’s symbolic troops. This is not an important combat presence, which is going to endanger Russia. This is symbolic troops, just as I said, as a proof, as an evidence that this part of Europe is going to be defended. But this presence is not endangering Russian interests," Waszczykowski added.