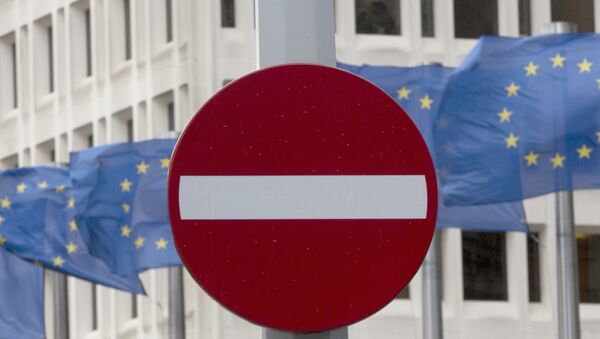 The EU has faced a new crisis concerning difficulties between the core part of the bloc and its new members. According to experts, this may result in a new massive political crisis in Europe.

'Revolt Against Brussels': Who Can Benefit From Putting Poland-EU Ties to Test
The European Union is facing difficulties dealing with some of its newcomers, namely Poland and Hungary. When a dozen Eastern European nations joined the bloc in the early 2000s Brussels expected that they would be easily integrated into the European family; but it was wrong.

According to Bloomberg, a new political crisis is currently brewing within the bloc, based on the inability or unwillingness of certain new members to comply with basic integration principles.

"Poland and Hungary form the rebel core because of their political assault on democratic institutions. Other former communist nations such as the Czech Republic, Slovakia and Romania have strayed from the mainstream by rejecting refugees or by plans to make it harder for officials to be prosecuted," the article read.

In an interview with Radio Sputnik, Vladimir Olenchneko, a senior research fellow at the Institute of World Economics and International Relations at the Russian Academy of Sciences, pointed to a drastic difference between the core EU members and its newbies.

"This region [Eastern Europe] was genetically incompatible with the EU and after 13 years we don’t see any progress in their integration into the bloc. They still fall behind in economy and cannot comply with European political values," the expert said.

European Commission Announces Start of Infringement Procedures Against Poland
At the same time, some new members, first of all Poland, managed to develop their economy during their stay in the EU. Now, they have certain ambitions that cannot be ignored by Brussels.

"The concept of these countries as a barrier between Europe and Russia has changed since then. Some of them, especially Poland, claim for a sovereign and independent role in this game," political analyst Alexei Martynov, director of the International Institute for Modern States, told Sputnik.

According to the expert, Poland sees Germany, not Russia, as its main rival in Europe.

"Everything Warsaw does is directed against Berlin. Poland sees Germany as its main rival and the most serious danger. But Poland will never replace Germany whatever it does," Martynov said.

Hungary Ready to Challenge EU Commission’s Sanctions Over Migrants in Court
Hungary is another headache for the European Union. The principal issue behind Budapest-Brussels tensions is the refugee crisis in Europe.

"Hungary was one of the first countries to face the influx of migrants. In response, the government decided to close the border and build a fence despite Brussels’ recommendations," the analyst said.

The role of the United States in this crisis is ambiguous. On the one hand, the US continues to watch from the sidelines. On the other hand, Poland relies on support from Washington while confronting Brussels. In particular, in early July, US President Donald Trump attended a summit of the Three Seas Initiative in Warsaw where he reaffirmed full support for the Polish government.

Poland's Judicial Reform to 'Ruin' Europe's Opinion About Polish Democracy - EU
As for the prospects of the crisis within the EU, some experts suggest that the tensions are likely to further evolve since Brussel adheres to a rather hardline approach. In particular, some European politicians have proposed using financial aid as leverage over such countries as Poland and Hungary.
Olenchenko noted that currently there is the trend of isolating new EU members from the core part of the bloc.

"The leaders, namely Germany, France and Italy, understand that such countries as Poland are a burden for the EU. I guess they will seek to isolate them. Moreover, there is the concept of a multispeed European integration, according to which the leaders make decisions and the rest follow them," the expert concluded.