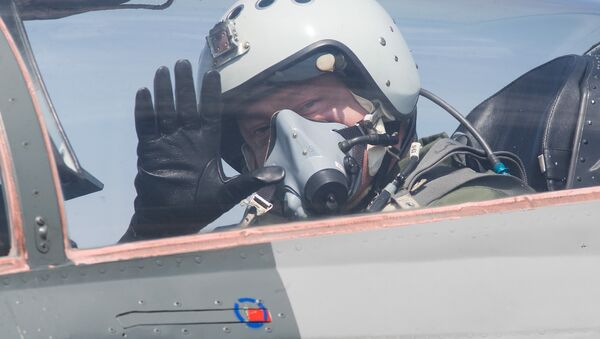 © REUTERS / MykhailoMarkiv/Ukrainian Presidential Press Service
Subscribe
While the Ukrainian economy is on the brink of collapse and the political situation in the country might escalate into renewed military conflict, Ukrainian President Petro Poroshenko seems to be totally detached from reality, according to military and political expert Viktor Baranets.

Last Saturday, the head of state used a Soviet multipurpose MiG-29 fighter jet to fly to a military airfield in the Vinnytsia region in order to congratulate military pilots on the Ukrainian Air Force Day, a move that was perceived by some people as "cheap PR."

"The Ukrainian president flying with an old MiG-29 — is a miserable counterfeit and a ridiculous attempt to show off," military observer Viktor Baranets said in an exclusive interview with Zvezda TV channel.

"Petro Poroshenko wants to be like all dignified presidents. Of course, this is a PR campaign, of course, it's an attempt to show off. Look, Ukrainian aviation as such does not exist, especially after a huge number of aircrafts were destroyed in the southeast of Ukraine…. Poroshenko wanted people to be proud of him, but prompted lots of jokes instead," he continued.

Social media users reacted to Poroshenko's move with irony. Many of them made fun of the Ukrainian leader's flight.

​"On August 5, on the Ukrainian Air Force Day, Poroshenko pretended that there is actually an air force in Ukraine, and flew with the MiG-29 fighter jet."

Another Twitter user nicknamed gaewmaxim ironically wondered if the law on decommunization adopted in Ukraine does not apply to the Soviet technology.

​"The president is the lucky one. Using his official position, he flew a modern fighter like a taxi with his own driver — the colonel general," another social media user wrote on Facebook.

"It's unpatriotic to fly a MiG-29," another commentator said, implying the fact that the fighter jet was manufactured by the Soviet Union.

Now users of social networks are waiting for Poroshenko to "take a trip on board of a submarine."

000000
Popular comments
Unlike the new USA F-35 this machine will have an adequate oxygen supply. Lets presume he was given a gentle ride and kept his bowel, bladder and stomach content.
K9
6 August 2017, 20:54 GMT
000000
ivanwa88, I had not thought of this possibility, I don't believe that the F-35 machine would be recommended. The F35 is liable to catch fire and/or suffocate the pilot. Perhaps this is the reason all along, they cannot provide..the oxygen tends explode in a fire.
K9
6 August 2017, 21:18 GMT
000000
Newsfeed
0
New firstOld first
loader
LIVE
Заголовок открываемого материала
Access to the chat has been blocked for violating the rules . You will be able to participate again through:∞. If you do not agree with the blocking, please use the feedback form
The discussion is closed. You can participate in the discussion within 24 hours after the publication of the article.
To participate in the discussion
log in or register
loader
Chats
Заголовок открываемого материала
Worldwide
InternationalEnglishEnglishMundoEspañolSpanish
Europe
DeutschlandDeutschGermanFranceFrançaisFrenchΕλλάδαΕλληνικάGreekItaliaItalianoItalianČeská republikaČeštinaCzechPolskaPolskiPolishСрбиjаСрпскиSerbianLatvijaLatviešuLatvianLietuvaLietuviųLithuanianMoldovaMoldoveneascăMoldavianБеларусьБеларускiBelarusian
Transcaucasia
ԱրմենիաՀայերենArmenianАҧсныАҧсышәалаAbkhazХуссар ИрыстонИронауОssetianსაქართველოქართულიGeorgianAzərbaycanАzərbaycancaAzerbaijani
Middle East
Sputnik عربيArabicArabicTürkiyeTürkçeTurkishSputnik ایرانPersianPersianSputnik افغانستانDariDari
Central Asia
ҚазақстанҚазақ тіліKazakhКыргызстанКыргызчаKyrgyzOʻzbekistonЎзбекчаUzbekТоҷикистонТоҷикӣTajik
East & Southeast Asia
Việt NamTiếng ViệtVietnamese日本日本語Japanese俄罗斯卫星通讯社中文（简体）Chinese (simplified)俄罗斯卫星通讯社中文（繁体）Chinese (traditional)
South America
BrasilPortuguêsPortuguese
NewsfeedBreaking
08:55 GMTPutin Offers Deep Condolences to Relatives of Perm University Shooting Victims, Kremlin Says
08:39 GMTAustralia Trade Minister Looks Forward to Meeting With French Colleagues Amid Sub Deal Row
08:38 GMTVolcano Eruption on Spanish Island of La Palma Forcing Evacuations
08:06 GMTMen Sleep Worse During Waxing Moon, Women Unaffected – Study
07:58 GMTEmmy Awards 2021: Big Winners, 'Hollywood's Most Hated Man' and #SoWhite Controversy
07:30 GMTIndia: Uproar Over Arrest of BJP's Kirit Somaiya in Maharashtra For Accusing Minister of Corruption
07:10 GMTFinnish PM Embroiled in Product Placement Controversy Over Instagram Story
07:05 GMTEight Killed as Gunman Goes on a Shooting Spree at Russia's Perm University
06:27 GMTCanada Set to Deliver Verdict in Testy Vote as PM’s Cakewalk Becomes Nail-Biter
06:17 GMTTaliban Order Women Working in Kabul to Stay at Home, Interim Mayor Says
06:12 GMTSweden Raises Taxes to Finance Largest Military Investment in Modern Times
06:01 GMTBoJo Vows UK’s ‘Ineradicable’ Love of France in Bid to Mend Fences Amid Diplomatic Row Over AUKUS
06:00 GMTBritain Considers Offering Loans to Energy Firms Amid Dramatic Hike in Gas Prices - Report
05:29 GMTRussia’s Ruling Party Ahead in Parliamentary Vote With Over 48%, Election Commission Says
04:34 GMTLive Updates: UK PM Johnson to Push Joe Biden to Lift COVID-19 Travel Ban With US
04:30 GMTNot in the Mood: Golden Retriever Does Not Want to Cuddle
04:28 GMTChinese Observers Give Positive Assessment of Russian State Duma Election
03:45 GMTMusk Adds Another Joke to Joe Biden’s ‘Sleepy’ Issue, When Asked About ‘Inspiration4’ Flight
03:16 GMTKhamenei Appoints New Head of Iranian Air Force
03:16 GMTWait, Again? New Photo of Trudeau Wearing Blackface Emerges on Social Media