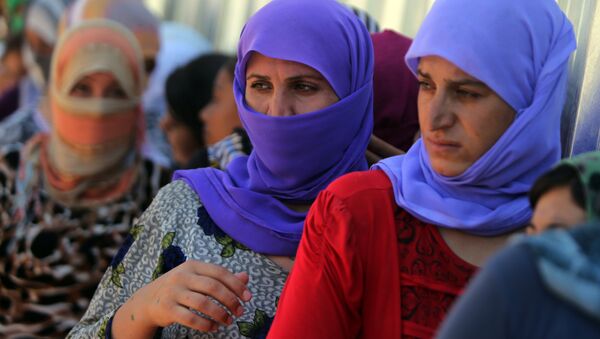 As the Iraqi Kurdish leadership continues to battle Daesh in an effort to free Yazidis from captivity and liberate towns and villages, Sputnik takes a look at the city of Sinjar, which was liberated two years ago but where Daesh still haunts its people.

Daesh Slavery Business: Over 1,700 Yazidis Bought From Terrorists' Captivity
Heyri Bozan, a representative of the Yazidis in the Kurdish Regional Ministry for Religious Affairs, spoke to Sputnik in an interview about the liberated city of Sinjar, stressing that many Yazidi women and children are still prisoners of Daesh.

On August 3, 2014, Daesh terrorists captured the city of Sinjar in Iraq. In the next few days, the terrorists executed hundreds of Yazidi men and captured thousands of women and children. Many of them were taken to Syria.

Bozan said that over the last three years 3,092 Yazidis have been saved from Daesh but another 3,325 people still remain in the clutches of the terrorists.

“Daesh still holds 3,325 Yazidis in captivity. Most prisoners are women, girls and children. Yazidi men had been executed by the militants, whereas, women and their daughters have been sold,” Bozan said.

He further said, “We succeeded in saving part of the Yazidis held by Daesh in Mosul and its environs, in Syria and elsewhere. The children, whom we managed to save, told us that Daesh changed their names to Islamic ones. They also used children as suicide bombers and continue to do so now,” the representative said.

Daesh has been responsible for committing an ongoing genocide against the Yazidi minority group in both Syria and Iraq since August 2014. As a result, thousands of Yazidi men, women and children have been captured, killed, sexually enslaved and tortured by Daesh terrorists.

The Yazidis were targeted by Daesh in its campaign to "purify" Iraq and its neighboring countries of non-Islamic influences.