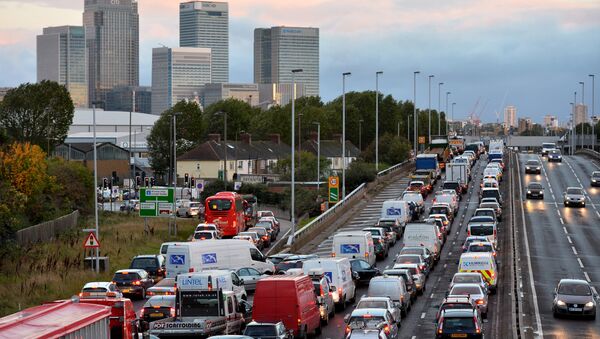 The UK Society of Motor Manufacturers and Traders said that the UK market has been experiencing a decline for forth consecutive month, decreasing by 9.3 percent in July.

Science & Tech
Baidu Enter Driverless Car Market But Full Autonomy Readiness Still a Concern
MOSCOW (Sputnik) — The UK market has been experiencing a decline for forth consecutive month, decreasing by 9.3 percent in July, as the uncertainties around the UK government's post-Brexit environmental policy are weighing on the decisions of car buyers, the UK Society of Motor Manufacturers and Traders (SMMT) said in a press release Friday.

"The UK new car market declined —9.3% in July, according to figures published today by SMMT, the fourth consecutive monthly fall. 161,997 new cars were registered in the month as the market continues to fall amidst growing uncertainty over Brexit and in line with forecasts," the press release read.

"The fall in consumer and business confidence is having a knock on effect on demand in the new car market and government must act quickly to provide concrete plans regarding Brexit. While it’s encouraging to see record achievements for alternatively fuelled vehicles, consumers considering other fuel types will have undoubtedly been affected by the uncertainty surrounding the government’s clean air plans," SMMT Chief Executive Mike Hawes said, as quoted in a press release.

On June 23, 2016, the United Kingdom voted to leave the European Union in a referendum. Brexit negotiations between the United Kingdom and the European Union officially kicked off on June 19, and are due to be completed by the end of March 2019. While the UK government had pledged to keep EU standards on environmental protection following Brexit, possible deviations have not been ruled out and sufficient political will to preserve such standards has not been shown.