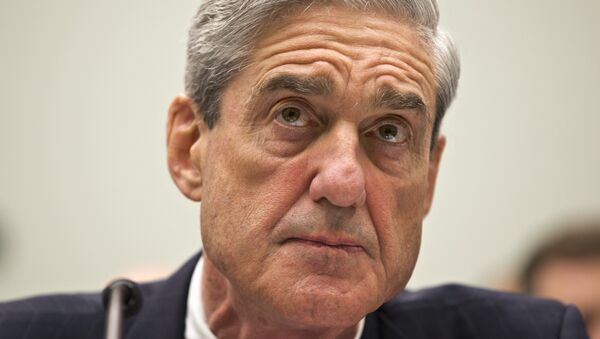 © AP Photo / J. Scott Applewhite
Subscribe
US Special Counsel Robert Mueller has impaneled a grand jury to investigate Russia's alleged interference in the 2016 US election, in a sign that the probe is gaining momentum, US media reported on Thursday.

A grand jury is called in order to determine whether a criminal indictment should be issued or not. If the grand jury chooses to indict (meaning they find there to be probable cause to believe that the accused committed a crime), then the case usually will go to trial. It is not an indication that Mueller believes a crime has taken place — it is an indication that he believes that it is possible that a crime has taken place.

In May 2017, Mueller was appointed as special counsel to oversee the Justice Department's investigation into "any links and/or coordination between Russian government and individuals associated with the campaign of President Donald Trump, and any matters that arose or may arise directly from the investigation."

Mueller, who headed the FBI from 2001 to 2013, was appointed by the DoJ to investigate a variety of charges: alleged Russian interference in the election, links between the Trump campaign and the Trump White House to Russian actors, Trump's alleged obstruction of justice in firing individuals such as former FBI Director James Comey, and investigations into Trump's former National Security Adviser Michael Flynn (who was caught lying about a meeting with Russian ambassador to the United States Sergei Kislyak).

"Grand jury matters are typically secret. The White House favors anything that accelerates the conclusion of his work fairly," said Trump's lawyer Ty Cobb to the Wall Street Journal. "The White House is committed to fully cooperating with Mr. Mueller."

Also today, several senators expressed a desire to pass a bill that would allow a special counsel such as Mueller to challenge a presidential dismissal in court. Trump has been highly critical of Mueller's appointment and called for the investigation to be closed, leading to concerns that he may try to fire Mueller.

"It is critical that special counsels have the independence and resources they need to lead investigations," said Senator Thom Tillis (R-NC) in a statement. Tillis serves on the Senate Judiciary Committee. "A back-end judicial review process to prevent unmerited removals of special counsels not only helps to ensure their investigatory independence, but also reaffirms our nation's system of checks and balances."

000000
Popular comments
This is absolutely criminal and ridiculous. The US needs real leadership and domestic attention and these fools, corrupt and self-appointed elite are destroying what's left of western civilization. Not that I put much faith in polls, but the RCP poll of US Congress approval rating has gone from an average of 16.4 to 15% in about 2 weeks. I hope it drops to under 10%. If anything, it will be symbolic.
jas
4 August 2017, 00:00 GMT2
000000
Yaaaaawn. It's like a record stuck on the turntable..."...blame the Russians, blame the Russians...". This is getting boring. Next.
Jets
4 August 2017, 00:02 GMT1
000000
Newsfeed
0
New firstOld first
loader
LIVE
Заголовок открываемого материала
Access to the chat has been blocked for violating the rules . You will be able to participate again through:∞. If you do not agree with the blocking, please use the feedback form
The discussion is closed. You can participate in the discussion within 24 hours after the publication of the article.
To participate in the discussion
log in or register
loader
Chats
Заголовок открываемого материала
Worldwide
InternationalEnglishEnglishMundoEspañolSpanish
Europe
DeutschlandDeutschGermanFranceFrançaisFrenchΕλλάδαΕλληνικάGreekItaliaItalianoItalianČeská republikaČeštinaCzechPolskaPolskiPolishСрбиjаСрпскиSerbianLatvijaLatviešuLatvianLietuvaLietuviųLithuanianMoldovaMoldoveneascăMoldavianБеларусьБеларускiBelarusian
Transcaucasia
ԱրմենիաՀայերենArmenianАҧсныАҧсышәалаAbkhazХуссар ИрыстонИронауОssetianსაქართველოქართულიGeorgianAzərbaycanАzərbaycancaAzerbaijani
Middle East
Sputnik عربيArabicArabicTürkiyeTürkçeTurkishSputnik ایرانPersianPersianSputnik افغانستانDariDari
Central Asia
ҚазақстанҚазақ тіліKazakhКыргызстанКыргызчаKyrgyzOʻzbekistonЎзбекчаUzbekТоҷикистонТоҷикӣTajik
East & Southeast Asia
Việt NamTiếng ViệtVietnamese日本日本語Japanese中国中文Chinese
South America
BrasilPortuguêsPortuguese
NewsfeedBreaking
18:48 GMT'Sending a Message': Space Force General Claims US Satellites Are Attacked on Daily Basis
18:47 GMTCalifornia Health Officials Identify First Case of Omicron Covid Variant in United States
18:33 GMTRepublicans Fear 'Civil War' in Wake of Ilhan Omar Scandal, Voice Concerns About 2022 Midterms
18:05 GMTDeath Toll From Michigan High School Shooting Rises to 4
17:05 GMTWhat Pushed Donald Trump to View US Intelligence Community With Suspicion During His Tenure
16:42 GMT'Melding of Services': Australia Won’t Lose ‘Sovereignty’ Under AUKUS, says Biden’s 'Asia Tsar'
16:42 GMTIndia's Top Car-maker Maruti Suzuki's November Sales Down 9% On Chip Shortage
16:23 GMTMassive 'Potentially Hazardous' Asteroid 'Taller Than Chrysler Building' To Approach Earth Next Week
15:38 GMTUK Parliament Reportedly on Lockdown After Man Cycles Through Security Gates - Photos
15:34 GMTUS School Shootings on the Rise After Pandemic-Caused Hiatus
15:23 GMTDominic Raab Under Pressure To Bring In UK Child Cruelty Register After Approving ‘Tony’s Law’
15:08 GMTRonaldo's Bodyguards Investigated in Portugal Over Suspicion of Illegal Work – Report
14:46 GMTAnother UK Energy Supplier Pushed Out of Market by High Gas Prices
14:41 GMTAntony Blinken: US Preparing Additional Sanctions on Belarus in Coordination With EU
14:27 GMTRussia Contracts Full Cycle Production of Sputnik V in Vietnam
14:22 GMTMeadows Claims in New Book That Trump Tested Positive for COVID Days Before 2020 Debate With Biden
14:17 GMTUS State Secretary Blinken Delivers Remarks Following Meeting of NATO Foreign Ministers
13:46 GMT'I Thought I Was the Good Guy': First Video of Alleged Capitol Rioter FBI Interrogation Released
13:36 GMTStoltenberg Holds Final Press Conference Following NATO Foreign Ministers Meeting
13:16 GMT'Hands Everywhere': Epstein Accuser Testifies Maxwell Was Present When Pedophile Sexually Abused Her