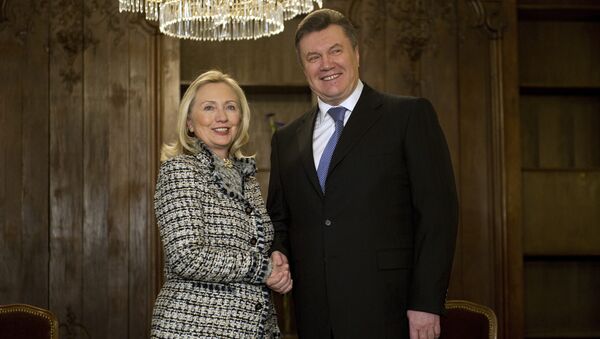 © AFP 2021 / JIM WATSON
Subscribe
Ahead of Wednesday’s hearing on Ukrainian meddling in the 2016 US presidential election, Senate Judiciary Committee Chairman Chuck Grassley called on the US Justice Department Monday to investigate a Ukrainian political operative over "apparent evidence of collusion" with Hillary Clinton’s 2016 presidential campaign.

Ukrainian-American DNC consultant Alexandra Chalupa has emerged as a key figure behind accusations of collusion between campaign officials working for then-Republican candidate Donald Trump and the Russian government. She "reportedly met with Ukrainian officials during the presidential election for the express purpose of exposing alleged ties between then-candidate Donald Trump, Paul Manafort and Russia," Grassley wrote in a July 24 letter to Deputy Attorney General Rod Rosenstein.

Chalupa told Ukrainian Embassy officials that "if we can get enough information on Paul [Manafort] or [Donald] Trump’s involvement with Russia," Congress would hold a hearing "by September."

She also met with House Democrat Marcy Kaptur’s staffers at one point to discuss a Congressional investigation. Kaptur, the longest-serving woman in the House of Representatives, would have significant credibility to demand a probe. The story imagined, designed, and fabricated by Chalupa linking the Kremlin and former Trump campaign manager Paul Manafort "would not only benefit the Hillary Clinton campaign, but it would benefit the Ukrainian government," Grassley said in his letter.

The information warfare operation seems to have been hatched in March 2016, when Ukrainian Ambassador to Washington Valeriy Chaly and one of Chaly’s top aides met with Chalupa and the operative "shared her alleged concerns about Manafort," Grassley wrote. While the diplomat claimed the meeting was for official business — to suss out plans for a June reception in Georgetown — embassy official Andrii Telizhenko confided to Politico there was more to it than that.

The real purpose of the March meeting was to "coordinat[e] an investigation with the Hillary team on Paul Manafort with Alexdra Chalupa,” Telizhenko told Politico, adding, "the embassy worked very closely with Chalupa." The Ukrainian official was ordered by his superiors to aid Chalupa "with research to connect Trump, Manafort, and the Russians," the Grassley letter continued.

Trump’s meteoric political rise appears to have stunned Kiev. Grassley referenced the words of Ukrainian lawmaker Serhiy Leschenko, who claimed now-President Trump’s run compelled “Kiev’s wider political leadership to do something they would never have attempted before: intervene, however indirectly, in a US election.”

“Chalupa’s actions implicate the Foreign Agents Registration Act,” Grassley noted. “Given the public reporting of these activities in support of a foreign government, it is imperative” that the US Justice Department provide answers to questions of why Chalupa wasn’t required to register under FARA.

"Are you investigating links and coordination between the Ukrainian government and officials associated with the campaign of Hillary Clinton or the Democratic National Committee? If not, why not?"

​"Trump probably remembered all those commentaries made during the election by the Ukrainian president and other politicians who sided with Trump’s opponents,” political analyst Alexander Dudchak told Radio Sputnik. "It appears that Trump has a good memory; he forgets nothing, and he already demonstrated his attitude toward Ukraine," the analyst noted.

"I don’t think that the Ukrainian leadership directly interfered with the voting process, but Ukraine’s stance actually could’ve influenced the election," Dudchak concluded.

000000
Popular comments
I hope it's not too much trouble for Grassley to actually go after Democrats. Wouldn't want him to be confused about anything. He seems to be enjoying thrashing Trump with endless inquiries and investigations and press briefings and hearings about nothing.
jas
26 July 2017, 03:14 GMT1
000000
This would be the fair thing to do. Instead of long meetings where they occasionally admit that there are no smoking guns, they can take the Ukraine investigation and enjoy the fireworks. Or better yet, they can end all this nonsense and start running the country, and move on. Their no angels out there, let's start building constructive relationships with our neighbors and tending to the many real problems that affect the lives of the masses. Remember, love Russia.
Darrell R
26 July 2017, 07:43 GMT
000000
Newsfeed
0
New firstOld first
loader
LIVE
Заголовок открываемого материала
Access to the chat has been blocked for violating the rules . You will be able to participate again through:∞. If you do not agree with the blocking, please use the feedback form
The discussion is closed. You can participate in the discussion within 24 hours after the publication of the article.
To participate in the discussion
log in or register
loader
Chats
Заголовок открываемого материала
Worldwide
InternationalEnglishEnglishMundoEspañolSpanish
Europe
DeutschlandDeutschGermanFranceFrançaisFrenchΕλλάδαΕλληνικάGreekItaliaItalianoItalianČeská republikaČeštinaCzechPolskaPolskiPolishСрбиjаСрпскиSerbianLatvijaLatviešuLatvianLietuvaLietuviųLithuanianMoldovaMoldoveneascăMoldavianБеларусьБеларускiBelarusian
Transcaucasia
ԱրմենիաՀայերենArmenianАҧсныАҧсышәалаAbkhazХуссар ИрыстонИронауОssetianსაქართველოქართულიGeorgianAzərbaycanАzərbaycancaAzerbaijani
Middle East
Sputnik عربيArabicArabicTürkiyeTürkçeTurkishSputnik ایرانPersianPersianSputnik افغانستانDariDari
Central Asia
ҚазақстанҚазақ тіліKazakhКыргызстанКыргызчаKyrgyzOʻzbekistonЎзбекчаUzbekТоҷикистонТоҷикӣTajik
East & Southeast Asia
Việt NamTiếng ViệtVietnamese日本日本語Japanese俄罗斯卫星通讯社中文（简体）Chinese (simplified)俄罗斯卫星通讯社中文（繁体）Chinese (traditional)
South America
BrasilPortuguêsPortuguese
NewsfeedBreaking
01:43 GMTIRGC Chief: Iran No Longer Sees US as Threat - Report
01:18 GMTChinese Covid Vaccines Reach 100 Nations, But WHO Warns Africa Still Short 470 Million Shots in 2021
01:04 GMTAwkward Moment as White House Staff Cuts Off Biden-Johnson Meeting in Mid-Sentence
00:20 GMTVideo: Military Jet Intercepts Small Aircraft Over NYC in the Middle of UN General Assembly
00:19 GMTPark Ranger ‘Implored’ Gabby Petito to Distance Herself From Toxic Relationship With Brian Laundrie
YesterdayVideos: 6.0 Earthquake Strikes Southeastern Australia
YesterdayPro-Reunification Candidate Chang Ya-chung Edges Ahead as Chairman Election in Taiwan’s KMT Nears
YesterdayTexas Governor Vows to Prevent Del Rio Migrant Surge Disaster From Being Replicated
YesterdayUber’s Business Model Faces Threat After Legal Setback Across Europe
YesterdayUS Lawsuit Challenges Alliance of 2 Airlines for Stifling Competition
YesterdayTaliban Say No Al-Qaeda Members Present in Afghanistan
YesterdayJoe Biden Faces Backlash Over Inept UN Speech
YesterdayUS Democrats Strike Down $1Bln in Israel Defense Aid to Keep US Govt Running, Reports Say
YesterdayPope Jokes ‘Some People Wanted Him Dead’ While He Was Undergoing Surgery, Reports Say
YesterdayNo American Dream for Haitians
YesterdayBoris Johnson Contradicts Joe Biden With Claim of Intelligence That Taliban Could Take Kabul
YesterdayPelosi Accuses GOP of ‘Trying to Force First-Ever US Default’ by Opposing Limit Suspension Bill
YesterdayFamily Lawyer Confirms Human Remains Found in Wyoming Belong to Gabby Petito
YesterdayFrench President Macron's Health Pass QR-Code Leaked to Internet - Reports
YesterdayThe US Space Force’s Oldest Adversary, Social Media, Roasts Their New Uniforms