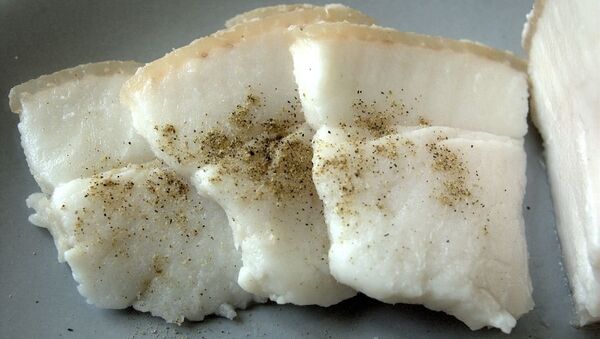 Ukraine's exports of salo, a meat product consisting of cured slabs of fatback, have dropped 98%, according to the country's State Fiscal service. Ukrainian economists say that the collapse of the food product's exports is connected to the loss of the Russian market.

Ukrainian business news portal Business Views has reported that salo exports fell by 98% in 2016, compared to the previous year. Total export profits fell from $7.74 million US in 2015 to a mere $88,000 a year later.

Salo, which is a popular treat among the East Slavic countries, is commonly associated with Ukrainian culinary culture. According to the publication, exports collapsed due to Russia's refusal to continue purchasing Ukrainian products. Moldova has also rejected Ukrainian exports, and producers have been left struggling in a search for new markets.

Ukraine's Move to American Thermal Coal to Boost US Economy - White House
The Ukrainian economy has faced severe problems in finding markets for many of its exports amid the collapse of relations with Russia. Kiev signed an association agreement with the European Union in 2014, but the bloc has placed strict quotas on the tariff-free import of most Ukrainian foodstuffs. Ukraine's advanced industries, including industrial manufacturing, shipbuilding, aerospace, and metallurgy, have struggled to find a place in the European market after losing their traditional Russian markets.

Speaking to Radio Sputnik, Oleg Soskin, the head of the department of international economics at the Kiev-based National Academy of Management, said that the collapse in the export of the iconic Ukrainian food was highly symbolic of the overall state of the country's economy.

This particular export article was not very large, Soskin noted, "but from the point of view of the overall decline in Ukrainian export production is a very symbolic product."

"Almost all exports are on the decline, especially in the machine-building and processing industries. We have a highly negative balance of trade [$442 million as of May 2017]. Here we face the confluence of a generally bad situation in Ukraine's foreign trade, the loss of export markets, and now we've stopped exports of our salo as well," the expert lamented.

Ukraine's Economy 'Has No Chance for Recovery While It's Run by Economic Hitmen'
Soskin stressed that the loss of the Russian market was without a doubt the key reason for the collapse in salo exports, and was part of a tendency which began in early 2014, when a pro-Western government took power in Kiev.

"The economic policy of the Russian government is well known, and is aimed at creating national capacities to replace various [imports]," the expert explained. Therefore, a fledgling salo-producing industry has popped up in Russia's Belgorod, Voronezh and Kursk regions. "These industries are developing there. Why import when you can produce similar if not better quality products at home?" Soskin asked.

According to the analyst, Ukraine had the opportunity to reorient its exports following the loss of the Russian market, but failed to do so due to a lack of a clear economic strategy. "We could have exported to Canada, where there are millions of ethnic Ukrainians. There's the Argentinian market. But to do so it's necessary to create opportunities [for producers]. The current government does not have the structures in place to study demand on the world market, and to promote Ukrainian products abroad."

"We had the Institute of World Economy and International Relations. Academician Yuri Pakhomov died…the institute was destroyed, and to date we do not have the necessary foreign economic scientific and analytical institutions which could analyze this issue," Soskin concluded.