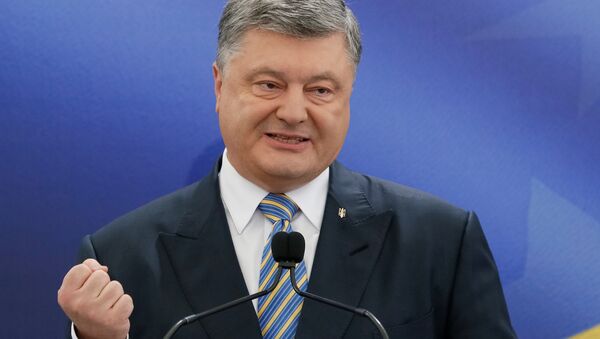 The US plan to supply Ukraine with weapons is "extremely dangerous," a French politician said to Sputnik, adding that President Poroshenko may use arms to wage a new war in the Donbass region to improve ratings in the run up to the presidential election in the country.

Ukraine's Economy 'Has No Chance for Recovery While It's Run by Economic Hitmen'
MOSCOW (Sputnik) — Ukrainian President Petro Poroshenko, who has failed to follow through with his much-hyped, economic and anti-corruption reforms, could try to wage a new war in Donbass next year in an effort to improve his ratings ahead of the upcoming presidential election, Thierry Mariani, a member from the French center-right The Republicans party, told Sputnik on Tuesday pointing out that in this context, the United States' proposed plan to supply Ukraine with munitions seems “extremely dangerous.”

US media reported on Monday that the US Defense and State Departments have come up with a plan to supply Ukraine with anti-tank missiles and other weaponry, and are currently awaiting approval from the White House.

“Concerning Ukraine, we have to remember that the presidential election is approaching. Poroshenko's situation is not so good. President Poroshenko, who failed in economic reforms, in anti-corruption reforms, will try to use a new war to win the election. Actually, I am afraid that we may witness a new war in Donbass next year. In this context, the US arms deliveries to Ukraine are extremely dangerous,” Mariani, who is also a co-president of the Franco-Russian Dialogue Association, said.

The politician underlined that he used to hold high expectations for Donald Trump’s presidency, but was now greatly disappointed by recent US policies.

“I was one of the French politicians, who had high expectations about Trump’s presidency. I was thinking that the American policies would change under Trump but after six months of his presidency the results are very disappointing. Little by little, his policies and actions started to remind me of [former US President Barack] Obama’s policies, especially, in the case of Ukraine, Syria and anti-Russian sanctions,” he said.

France should take a tough stance against any violation of the Minsk accords, Mariani continued, adding that is important the parties to the conflict continue political consultations.

US 'Should Take a Look in the Mirror' Before Blaming Russia for Ukrainian Crisis
“In this situation France should continue urging parties to continue negotiations. We need to support and try to apply all provisions of the Minsk agreements, which are the only way toward peace,” he concluded.

A violent military conflict in Ukraine started in 2014 after the residents of the eastern Donbass region refused to recognize the new Ukrainian government that came to power after what they perceived to be a coup.