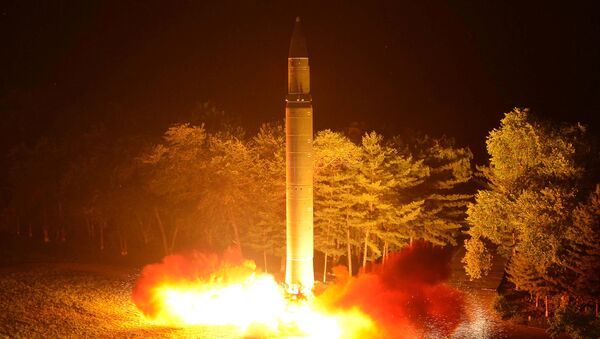 “It is now clear that North Korea is on the way to building a nuclear missile potential and sooner or later it will have nuclear warhead able to fly far and reach the United States which Pyongyans considers to be as its main adversary. I’m not ruling out the possibility that North Korean missiles will eventually be able to hit Alaska or Hawaii,” Lukin said.

It was the first nighttime ballistic missile launch by North Korea. According to South Korean military sources, the missile flew about 1,000 kilometers (631 miles) reaching an altitude of 3,700 kilometers (2,300 miles).

In an interview with Sputnik, Artyom Lukin said that the new North Korean missile is able to hit faraway targets, including those on the other side of the ocean.

“If what Pyongyang says is anything to go by, the missiles reached a high altitude and flew longer and farther. This means that if launched along a different trajectory, it would have reached the United States,” he noted.

He quoted US Secretary Rex Tillerson as saying being the only two major powers maintaining economic and political ties with North Korea, China and Russia are responsible for its behavior.

“The US believes that China and Russia should bring pressure to bear on Pyongyang. However it looks like neither of them is going to do this. How can Russia possibly support US sanctions on North Korea now that Russia itself is under US sanctions?” the expert wondered.

"I think that as a permanent member of the UN Security Council, Russia will hardly allow any tough sanctions against Pyongyang. The Americans are free to introduce unilateral sanctions, but we know from experience that one-sided sanctions don't work if they are not supported by China and Russia," Artyom Lukin concluded.

North Korea’s Friday night launch was the second ICBM test in less than a month.

China Tells North Korea to Stick to UN Resolutions After New ICBM Test
On July 4, Pyongyang   announced it had successfully launched its first intercontinental ballistic missile, saying it traveled 580 miles and reached an altitude of 1,740 miles during its 39-minute flight before accurately hitting a targeted area in the Sea of Japan.

The test immediately prompted sharp criticism from the international community.

North Korea has been sharply criticized by the United States, South Korea and Japan for violating UN resolutions, while China has called for caution to prevent tensions from escalating.

000000
Popular comments
All the US is doing is re affirming unless you are a nuclear power they will force you to do their bidding at the end of a gun....seemingly that doesn't set well with some.

Nonyank
29 July 2017, 18:14 GMT3
000000
Interesting, the difference between the Russian reported trajectory and the South Korean reported Trajectory, clearly someone got it wrong. Wondering why.... Also wondering why the US did not shoot it down with THAAD......
Erik Trete
29 July 2017, 18:25 GMT2
000000
Newsfeed
0
New firstOld first
loader
LIVE
Заголовок открываемого материала
Access to the chat has been blocked for violating the rules . You will be able to participate again through:∞. If you do not agree with the blocking, please use the feedback form
The discussion is closed. You can participate in the discussion within 24 hours after the publication of the article.
To participate in the discussion
log in or register
loader
Chats
Заголовок открываемого материала
Worldwide
InternationalEnglishEnglishMundoEspañolSpanish
Europe
DeutschlandDeutschGermanFranceFrançaisFrenchΕλλάδαΕλληνικάGreekItaliaItalianoItalianČeská republikaČeštinaCzechPolskaPolskiPolishСрбиjаСрпскиSerbianLatvijaLatviešuLatvianLietuvaLietuviųLithuanianMoldovaMoldoveneascăMoldavianБеларусьБеларускiBelarusian
Transcaucasia
ԱրմենիաՀայերենArmenianАҧсныАҧсышәалаAbkhazХуссар ИрыстонИронауОssetianსაქართველოქართულიGeorgianAzərbaycanАzərbaycancaAzerbaijani
Middle East
Sputnik عربيArabicArabicTürkiyeTürkçeTurkishSputnik ایرانPersianPersianSputnik افغانستانDariDari
Central Asia
ҚазақстанҚазақ тіліKazakhКыргызстанКыргызчаKyrgyzOʻzbekistonЎзбекчаUzbekТоҷикистонТоҷикӣTajik
East & Southeast Asia
Việt NamTiếng ViệtVietnamese日本日本語Japanese俄罗斯卫星通讯社中文（简体）Chinese (simplified)俄罗斯卫星通讯社中文（繁体）Chinese (traditional)
South America
BrasilPortuguêsPortuguese
NewsfeedBreaking
06:37 GMT25 Injured After Explosion in Residential Building in Gothenburg, Sweden, Reports Say
06:13 GMTGerman Chancellor Candidates in Focus as Tough Coalition Talks Loom
05:53 GMTBrexit to Blame: Germany's Olaf Scholz Says 'End to Freedom of Movement' Fueled UK Petrol Crisis
05:37 GMTUK Motorist Runs Over 'Knife-Wielding' Man Amid Alleged Petrol Dispute - Video
05:23 GMTPatriarchy Strikes Back? Iceland's Historic Female-Majority Parliament Up in Smoke After Recount
04:43 GMTUS Marine Colonel Put in Brig For ‘Asking for Accountability’ Over US Departure From Afghanistan
04:03 GMTWitness Who Claims She Saw Prince Andrew Dancing With Giuffre at Club to Testify in Court - Report
03:24 GMTBennett Claims He Said 'No Three Times’ to President Biden During Their August Meeting
03:16 GMTRepublicans Slam DHS Chief Mayorkas for Allowing Thousands of Haitians Into US
01:37 GMTUS ‘Humiliated Like Never Before’, Trump Says, After DHS Allowed Thousands of Migrants to Pour in
01:31 GMTLockheed Martin to Build US Army’s Next Generation Tactical Vehicle Based System
01:10 GMTBorder Patrol Agents Disgruntled Over Biden's Attempts to Throw Them 'Under the Bus' - Report
00:53 GMTBeard-Check: Afghan Barbers Banned From Shaving, Trimming Beards - Reports
00:27 GMTR. Kelly Found Guilty: Will Artist Be Removed From Music Services?
00:03 GMTIs Sir Alex Ferguson Right, That Ronaldo, and not Messi, Could Score a Hat-trick for Anyone?
00:00 GMTUS Senator Menendez Urges New Sanctions on Turkey if It Acquires More Russian Weapons
YesterdayInsurgents Who Detained President of Guinea Declare Transitional Charter - Reports
YesterdayTexas Lawmakers Propose New Congressional Districts in Cities of Austin, Houston
YesterdayIOM Looking for Alternatives for Haitians at US Border, Brazil Being 1 Option - Sources
YesterdayCzech Republic Will Purchase Israeli-Made Air Defenses to Replace Soviet Gear