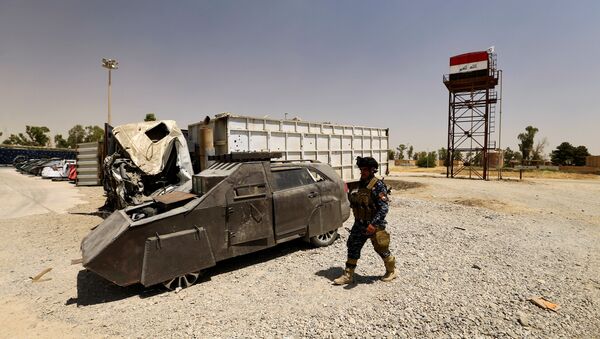 The head of the federal police of Iraq, Shakir Jaudat, spoke to Sputnik in an interview saying that more than half of the territory of the western shore of the Iraqi city of Mosul has been cleared of mines.

Daesh Booby-Traps Buildings in West Mosul as They Retreat from ‘Caliphate’
According to him, “60 percent of the territory of the western part of the city of Mosul is cleared and considered safe.”

An official statement of the federal police states that 312 houses were inspected, and six bombs and two suicide bombers were eliminated.

In addition, six Daesh terrorists who were hiding among civilians in the city were detained.

Earlier, Iraqi anti-terrorist forces found a bomb manufacturing plant on the west bank of Mosul, which was used by Daesh terrorists to produce bombs.

A source in the forces told Sputnik in an interview that the Iraqi forces detonated the plant together with all of its bomb-making equipment.

According to the source, during an inspection of the apartment complex, the forces also found a warehouse that the terrorists used to produce explosive devices on an industrial scale.

Some of the photos retrieved show the industrial materials that the terrorists used to make bombs and mines.