Liberal Globalist Establishment Has No Alternatives to 'Russia Did It' Narrative 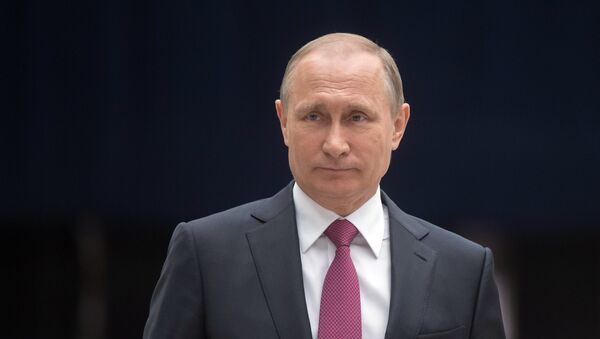 © Sputnik / Sergey Guneev
/
Go to the photo bank
Subscribe
For seemingly the umpteenth time, the latest issue of Time magazine features an image of Russian President Vladimir Putin, with the cover story yet again devoted to the Kremlin's dastardly plot to 'hack the US election'. RIA Novosti contributor Igor Pshenichnikov says America's corporate media appears to have become the victims of its own agitprop.

The new Time magazine cover, featuring a pixelated image of the Russian president's head composed of a mass of grey figures, is accompanied by a cover story titled 'The Secret Plan to Stop Putin's Election Plot'. The story is yet another elaborate, long-winded anti-puff piece about the Kremlin's alleged tampering in the 2016 US presidential elections, 'the enemy within' (Donald Trump, naturally) and Obama-era intelligence officials efforts to stop Vladimir Putin's dastardly scheme. 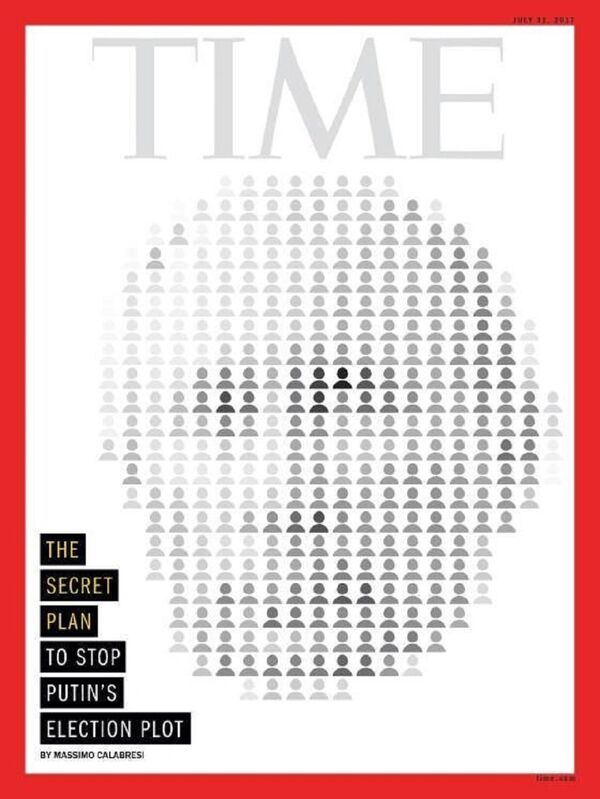 Commenting on the zeitgeist behind the image and the story, journalist and RIA Novosti contributor Igor Pshenichnikov quipped that of naturally, there was "no point hoping that the Russian president would be praised" in the Time piece. The story is part of the same narrative that's been spun and overanalyzed to no end since the 2016 election took place.

"The American man in the street has no doubt in his mind: the Russians 'hacked' into the US presidential elections, and brought Donald Trump to power. And President Putin is behind it all." "But how can it be otherwise," Pshenichnikov asked, if the website of the New York Times, America's traditional newspaper of record, features an entire subsection in its U.S. section called 'Russian Hacking and Influence in the US Election'?

Blame it on us! RT’s Epic ‘Trolling’ Ads Wow Social Media Users (PHOTOS, VIDEO)
"This heading is like a pop-up reminder window," the journalist wrote. "Like now for example, when a new scandal is being inflated – this time around the 'secret' meeting between Trump and Putin during the G20 dinner."

"Among the main materials of this section is a chart called 'Following the Links From Russian Hackers to the US Election.' One doesn't need to read further – even the blind can see that the Russians have hacked the whole of America," Pshenichnikov noted. 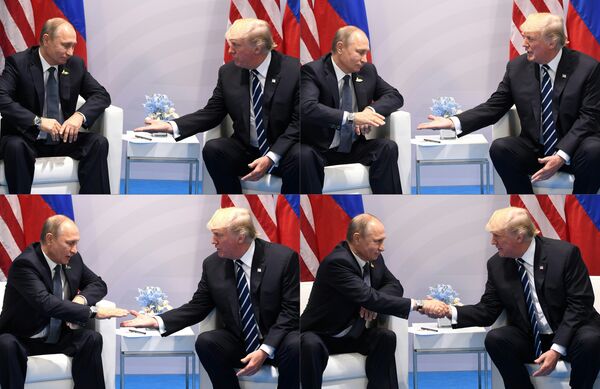 US President Donald Trump (L) and Russia's President Vladimir Putin shaking hands during a meeting on the sidelines of the G20 Summit in Hamburg, Germany, on July 7, 2017
© AFP 2021 / SAUL LOEB

"But if one reads closer, the explanations in this chart consist exclusively of phrases in the style of 'maybe' and 'it seems to me' – phrases like 'American intelligence officials have said they believed,' 'hacking group possibly linked to the [FSB], the main successor to the KGB,' 'investigators believe that the GRU, or a hacking group known as Fancy Bear,' 'intelligence officials assess with high confidence', etc."

"Not a single piece of evidence," Pshenichnikov wrote. "In the First Moscow Medical Institute there once was a professor who told students during the exam: 'Don't guess. Know.', and put a failing grade in students' grade book" if they didn't know the answer. "But in America, it seems, there is no one who could objectively evaluate everything and, on occasion, give a failing grade. In the minds of the overwhelming majority of Americans, a hallucinogenic child from the media is mixed with local reality, which in itself is often surreal."

Russian Embassy Trolls The Times for 'Throwing Out Dated Concepts…Like Evidence'
And if it were only the New York Times, that would be one thing, the journalist noted. "Similar 'reminders' of 'Russian interference' are posted across the entire website of the US's main television mouthpiece – CNN. Here, they are presented as permanent banners."

The banner headlines alone say everything that needs to be said: 'The Russia investigation: Everything you need to know and 'Who's who in Trump-Russia saga'.

"It's clear of course that the main character in this 'investigation' and this 'saga' is Vladimir Putin. The first banner has been blasting the eyes of CNN site's visitors since June 7, the second since May 28. This is already part of 'objective' reality," Pshenichnikov added. 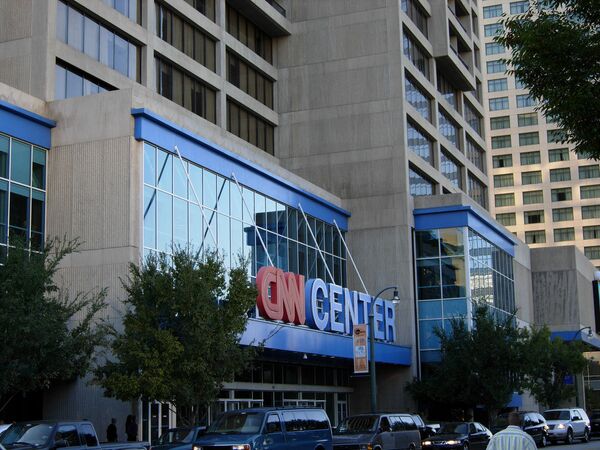 "All of us, of course, would be interested to learn when this will all end," the journalist noted. "But here's the thing: the global liberal establishment which finances and oversees the leading American and Western European media has used these media to give rise to a kind of 'collective intelligence' of a collective West. A distinctive feature of this collective intelligence is that it is tied to liberal catechism."

"With regard to Russia, the dial is configured to only one setting: Russia is evil (because it does not fit into the liberal system of values); liberal values themselves are good. And even if the curators of the Western media wanted to broadcast on a different wave, they would not be able to – the wave's not right. Turning the dial is useless – it's been broken off and lost."

James Clapper Suspects US President Trump of 'Making Russia Great Again'
Accordingly, Pshenichnikov noted that "there are serious concerns that the degradation of this 'collective intelligence' has already passed a point of no return. The trouble is that the organizers of this psychological violence over Western society through the media are themselves part of society. Therefore, they themselves are victims of their own agitprop.  They are not able to offer anything different. The liberal-globalist establishment lives in a state of paranoia and psychosis."

"And apparently, it will continue along the same lines, until it devours itself, all the while convinced that it is consuming us," the journalist concluded.

000000
Popular comments
they did a big bucket of shit and now thy must eat it!
francescoslossel
22 July 2017, 21:30 GMT4
000000
Clinton was forwarding classified intel to an lsraeIi with no official position, that Blumenthal "friend of her". That's high treason, by definition, but she wasn't put in jail as the people she was spying for are above the law in the US and the west. So they just made up the whole story about Russia meddling in the US elections, to cover up the spying scandal and the probable loss for Clinton.
Marques rouges
22 July 2017, 23:20 GMT4
000000
Newsfeed
0
New firstOld first
loader
LIVE
Заголовок открываемого материала
Access to the chat has been blocked for violating the rules . You will be able to participate again through:∞. If you do not agree with the blocking, please use the feedback form
The discussion is closed. You can participate in the discussion within 24 hours after the publication of the article.
To participate in the discussion
log in or register
loader
Chats
Заголовок открываемого материала
Worldwide
InternationalEnglishEnglishMundoEspañolSpanish
Europe
DeutschlandDeutschGermanFranceFrançaisFrenchΕλλάδαΕλληνικάGreekItaliaItalianoItalianČeská republikaČeštinaCzechPolskaPolskiPolishСрбиjаСрпскиSerbianLatvijaLatviešuLatvianLietuvaLietuviųLithuanianMoldovaMoldoveneascăMoldavianБеларусьБеларускiBelarusian
Transcaucasia
ԱրմենիաՀայերենArmenianАҧсныАҧсышәалаAbkhazХуссар ИрыстонИронауОssetianსაქართველოქართულიGeorgianAzərbaycanАzərbaycancaAzerbaijani
Middle East
Sputnik عربيArabicArabicTürkiyeTürkçeTurkishSputnik ایرانPersianPersianSputnik افغانستانDariDari
Central Asia
ҚазақстанҚазақ тіліKazakhКыргызстанКыргызчаKyrgyzOʻzbekistonЎзбекчаUzbekТоҷикистонТоҷикӣTajik
East & Southeast Asia
Việt NamTiếng ViệtVietnamese日本日本語Japanese中国中文Chinese
South America
BrasilPortuguêsPortuguese
NewsfeedBreaking
10:50 GMTMan Arrested After Setting Christmas Tree on Fire in New York - Video, Photo
10:36 GMTUS Claims It’s Thwarted Multiple Iranian Attempts to Smuggle Weapons, Oil to Yemen, Venezuela
10:35 GMTPrince Andrew Reportedly Cancels Legal Team's Xmas in Frantic Effort to Get Sex Abuse Case Ditched
10:10 GMTRussia Declined Dutch Request for Kursk Brigade Head Interrogation in MH17 Case, Judge Says
10:05 GMTMajority of Germans Believe Scholz's Stay as Chancellor No Longer Than 4 Years, Poll Shows
09:44 GMTMacron Slams EU Meddling in 'Politically Correct Language Nonsense' Amid 'Cancel Christmas' Scandal
09:43 GMTIndian Opposition Parties Boycott Parliament Session, Join Protest Staged by Suspended Lawmakers
09:20 GMTOlaf Scholz Takes Over From Angela Merkel as Germany's New Chancellor
09:17 GMTPolish Police Say Detected Body of Undocumented Migrant From Nigeria Near Belarus Border
08:04 GMTIndian Army Helicopter Crashes With Chief of Defence Staff On Board - Photo, Video
07:58 GMTMbappe Switches Allegiances From Ronaldo as Frenchman Declares Messi 'the World's Best Player'
07:46 GMTOmicron Showed '41-Fold' Evasion of Pfizer Jab But Boosters Should 'Fend Off' Attack, Claims Study
07:07 GMTSoyuz MS-20 Launches With Two Japanese Tourists to ISS From Baikonur
07:06 GMTEx-Pentagon Adviser: Putin-Biden Talks Unlikely to Ease Tensions Amid US Inability to Compromise
06:56 GMTIndian Oil Top Executive Not Ruling Out Decrease in Oil Demand Due to Spread of Omicron
06:51 GMTBattle Against Omicron Strain 'Probably Already Lost', Danish Professor Says
06:46 GMT'Untimely and Useless'? Israeli Tweeps Question Need for Fourth Covid Jab Amid Omicron Spread
06:21 GMTWest's Sanctions on Minsk Aim at Provoking New Wave of Anti-Government Protests, Moscow Says
06:08 GMTFirst Microscope Image of Omicron Variant Released
06:07 GMTArgentine President Feeling Good After Third Dose of Sputnik Vaccine, Russian Ambassador Says