'She Was a Quiet Girl': German Village In Shock At Schoolgirl Jihadist Discovery 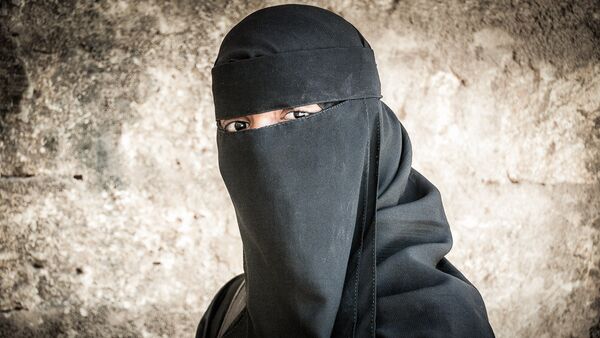 CC BY 2.0 / Michał Huniewicz / A girl in a burqa
Subscribe

A 16-year-old girl missing from her home in Germany for over a year has finally been found in Iraq, having joined the Daesh terrorist group.

Offensive on Tal Afar, Iraq’s New De Facto Daesh 'Statelet'
A missing 16-year-old girl from Saxony, Germany, is reportedly one of 20 female jihadists belonging to the Daesh terrorist group, who were discovered by the Iraqi army in Mosul last Thursday.

The women were discovered hiding in a network of tunnels below ground in the Syrian city, where the Iraqi army recently announced victory in the battle to reclaim the city from Daesh, who overran the city in 2014.

According to reports, they were armed with weapons and suicide bomber belts, ready to blow up the advancing Iraqi army. The girl, named Linda W. is one of five Germans among the group. The others were from Canada, Russia, Turkey, the Caucasus, Syria and Libya, Die Welt reported.

Linda W. grew up in the small town of Pulsnitz, 30km north-east of Dresden. She joined Daesh when she was just 15, helped by jihadists she met on the internet. She told her parents she was staying overnight at a friends' house, but instead traveled to the airport at Frankfurt-am-Main and then flew to Istanbul. Her parents have not seen her since.

The mother of the #sniper girl was found in #Germany and she didn't deny that she is her daughter @dw_arabic @dw_global pic.twitter.com/liZRXbgy8N

​A Sputnik Deutschland correspondent traveled to Pulsnitz and spoke with local people there. They told him that Linda grew up in a Protestant family, and her parents are separated.

"I knew Linda," said one local resident, who wished to remain anonymous.

"She was a very quiet girl, barely attracted attention. I know that she had family problems, especially with her stepfather. She could not cope with him at all, this was probably one of the triggers for her flight. I found out later that Linda had made contact with young Muslim men from the Arab world on the Internet. She probably met a boyfriend there and was greatly influenced by him, as young girls are. Ultimately, he was able to persuade her to come to the Middle East as an IS fighter."

In the small community of Pulsnitz, it was an open secret that Linda was becoming increasingly involved with radical Islam.

"I find it amazing that parents and teachers were aware of her increasing Islamic sentiments, but did nothing. A particularly spicy detail is the fact that her parents actually gifted her a Koran before she left. They certainly didn't think it through and couldn't foresee what it would lead to," the neighbor said.

Germany Sends Fighter Jets to Escort Passenger Plane Coming From Hurghada
In summer 2016, after Linda's flight to join Daesh in the Middle East became known, local evangelical pastor Maria Gruener told the media that she had blessed Linda during her confirmation a year before, describing her as a "quiet girl."

"No, I was not shocked when I first heard about Linda's case," she told Sputnik.

"Something has happened which I have been warning about for a long time. Namely, the danger that our youth is being influenced over the Internet. In a way, we are no longer in control. Linda radicalized herself through online contact with Islamic fundamentalists. It used to be easy to keep an eye on somebody: you knew who lived where, what relatives and friends they had. You could guess relatively well what was going on. That's no longer possible today," she said.

She said that local people reacted with "disbelief and horror" when they heard that Linda had gone to join Daesh.

"A lot of people couldn't believe it, a girl from our little town. You have to recall that there is no refugee center in Pulsnitz and probably not even any practicing Muslims. In any case, we are a city that under no circumstances could have been the starting point of radicalization. We have 7,800 inhabitants, no refugees and nevertheless such a case has happened in our town. In my opinion, this could be possible in every city that has an internet connection," Lueke warned.

Germany Starts Military Withdrawal From Turkish Incirlik Airbase
The mayor said that the citizens of Pulsnitz are keen to have Linda back home.

"Of course, we want and hope for her to come home safely. Apart from that, our citizens are experiencing a lot of media presence here. In actual fact, no one can say anything for sure, because we can only guess that Linda is actually the person we see there in the pictures," Lueke pointed out.

On Saturday, German media reported that the young woman seen in the photos, hidden in a Daesh tunnel, is in fact Linda W.

"Linda W. has been identified in Iraq," the Dresden public prosecutor's office confirmed to the local Saechsische Zeitung newspaper. Yazidi politician Vian Dakhil, a deputy in the Iraqi parliament, told the newspaper that the Iraqi army has handed Linda over to the police, who are questioning her at a military camp in Baghdad.

While the German consulate in Baghdad has been in contact with Linda, Iraq has no extradition agreement with Germany and Dakhil says that she will be tried in Iraq.

"She came to fight against the Iraqi people, so must face trial here," the politician said.