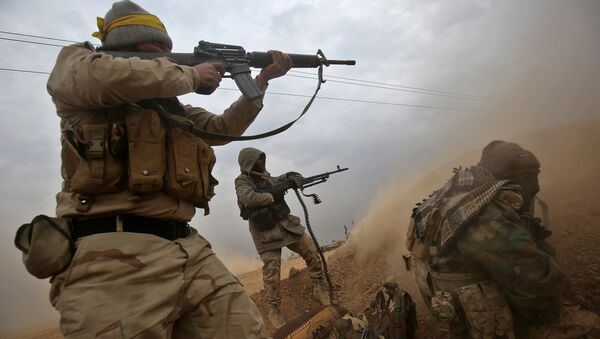 Many perilous obstacles lie in the path to this city, with roads leading up to it scattered with improvised explosive devices and snipers ready to take out anyone appearing within their sight.

TAL AFAR (Iraq) (Sputnik) — This is Tal Afar, one of the last remaining, major Daesh (outlawed in Russia) strongholds in Iraq. In January 2014, about six months before the Islamic State proclaimed its caliphate in Iraq, this area was close to becoming a separate administrative division. Within just a short period of time, the city has become the most powerful extremist stronghold in Iraq.

DANGER IN THE DESERT

Syria Ceasefire Zone Important for Future Political Process - Jordan Envoy to US
Tal Afar lies in the north of Syria's Nineveh province. Looking at a map, one notices that the city and its nearby villages are located in the middle of a desert. It is 63 kilometers (39 miles) west of Mosul and 60 kilometers east of the Syrian border. The Sinjar Mountain range, which is believed to be the only escape route for terrorists into Syria, separate the Daesh stronghold from Turkey.

A Sputnik correspondent stumbled upon traces of massive air strikes in this region. It turned out that these strikes targeted oil tankers that Daesh militants tried to take out of the country as they retreated.

The correspondent went toward Tal Afar as far as possible without compromising safety. The camp was fortified with sand bags, and one can see fighters from Al-Hashd Al-Sha'abi, an armed Shia group, behind the ramparts. While trying to avoid terrorist bullets and mortars, these fighters are preparing a decisive battle to liberate Tal Afar and nearby territories from Daesh.

The city is almost out of reach, since all the existing roads have been blocked by terrorists. For this reason, we had no choice other than to travel for hours through the desert accompanied by the militia fighters, and guided by special signs and reference marks. Our journey was further complicated by the fact that there was danger at every corner; the likelihood of us running into an Daesh patrol or hitting one of the landmines they had left behind was imminent.

We reached the command center of the 17th brigade, one of the key units of this militia force. Its fighters are in charge of security in the valley between Al Wadiyan and As-Suhul hills. The area is an open plain, making it easier to spot potential enemies.

Daesh Militants Declare Iraqi Tal Afar Independent State From Caliphate - Media
The command center is 1.5 kilometers away from the Daesh-controlled district of Al-Muhallabiyah, and the Sinjar Mountains are visible just just beyond the district. Together with the fighters, we move very quickly in order to avoid being hit by snipers nested in the rooftops of the tallest buildings.

The 17th brigade has lost many people over the past few days during multiple Daesh raids aimed at retaining control over territories they had once conquered. The extremists usually use car bombs or suicide attackers to stage explosions near militia fortifications. By doing so, Daesh seeks not only to harm the militia fighters, but also undermine their spirit.

A unit commander, who identified himself as Abu Kezen Miyakhi, told Sputnik that while this area was surrounded by militia, it was still very much under enemy control.

"After Al-Hashd Al-Sha'abi completed the deployment to this area in order to surround Daesh, we were ordered by the prime minister’s office to hand over our duties to the army," Al Miyakhi said, adding that the army had recently confirmed its intention to launch a clean-up operation in the region in order to rid it of terrorists.

The commander said that the operation to liberate Tal Afar was delayed for a number of reasons. Some of them were political, while others, as Al Miyakhi pointed out, had to do with strategy. In fact, Mosul and Tal Afar could be viewed as part of one large territory, therefore necessitating a split operation.

"The high command has taken the view that if an operation to free Tal Afar gets underway, Daesh militants would try to come back to Mosul, which could further complicate the fighting. For this reason, the operational theater was divided in order to launch the operation to liberate Mosul, after which the army, having strengthened its position, could strike Daesh in Tal Afar," Al Miyakhi noted.

Ankara Denies Involvement in Turkish Media Release of Info on US Bases in Syria
The militia commander said that Daesh militants were deceiving local residents from the very beginning by appealing to their religious feelings, but the terrorist groups’s unprecedented atrocities soon became apparent.

According to Al Miyakhi, there are not many Daesh militants nearby, so they are unable to ensure complete control over their territory.

"Consequently, some local residents can sneak out of the city and join us," he said.

Al Miyakhi also told Sputnik about some of the horrifying footage that was caught in surveillance cameras installed on militia fortifications. One of the recorded episodes was a public execution of a woman with three children who tried to run away. The terrorists caught her and "started firing," according to Al Miyakhi.