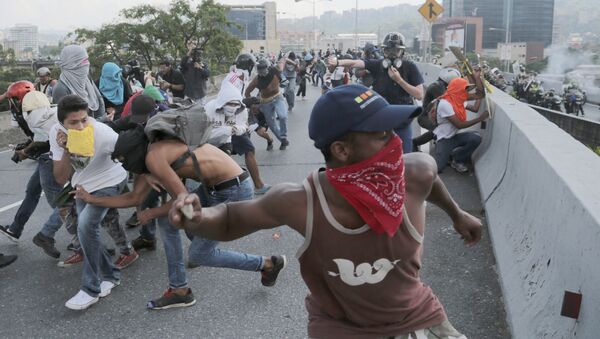 © AP Photo / Fernando Llano
Subscribe
In Venezuela, where most of the country's residents voted against the convening of a constituent assembly in a popular referendum, a pattern similar to that of Maidan in Kiev back in 2014 was seen, according to the head of the Russian Institute for Strategic Studies (RISI) Center for Public Relations Igor Pshenichnikov.

On Sunday, the opposition organized the so-called popular referendum, in which over 98 percent of 7.2 million voters opposed Maduro’s decision to call the Constituent Assembly. The country’s government believes that results of the referendum do not have legal force as only the electoral authorities have the right to hold such events.

Venezuela Vows to Reconsider Relations With US Amid Threat of Sanctions
"We are seeing a classic Maidan in Venezuela in the same pattern that was conducted by the US in Kiev in 2014," Pshenichnikov said in a video posted on the RISI website.

The expert stressed that the United States is the main cause of unrest in Venezuela. "Due to certain circumstances, the current parliament — the opposition, is completely opposed to Maduro and its main goal is to remove him from power," Pshenichnikov said.

By removing President Nicolas Maduro from power the United States wants to regain its positions in oil-rich Venezuela.

“This is the root of what is happening and this is the way to consider all the events that are taking place in Venezuela,” he said.

Pshenichnikov noted that since the beginning of April there have been mass protests in the country after the decision of the Supreme Court to severely restrict the power of the National Assembly.

"Had Maduro tried to ban the holding of a referendum, the situation could have gone completely out of control," the expert said.

Venezuelans Vote Against Maduro’s Constituent Assembly at 'Popular Referendum'
However, he noted that only the opposition forces participated in the voting.

"We must understand that Venezuela is sliding slowly, but confidently to the brink of a civil war," Pshenichnikov warned.

Venezuela has been experiencing a period of political instability amid the drastic economic situation in the country. The most recent protests erupted in April after the country's Supreme Court tried to take over legislative powers from the opposition-controlled National Assembly.

The top court reversed the ruling but the step did not stop mass demonstrations.

In May, Maduro announced his decision to call the National Constituent Assembly, which was regarded by the opposition as an attempted coup and resulted in further escalation of tensions that resulted in the deaths of over 90 people.

Venezuela will hold voting on July 30 to elect the Constitutional Assembly, set to rewrite the constitution as a way out of the political turmoil, which started in January 2016, when a new legislature was elected and relations between Venezuelan President Nicolas Maduro and the parliament became strained.