It's been three years already since the deadly MH17 plane crash in Ukraine, and yet so far not a single person has been brought to justice, while the investigation drags on.

Russian Radars Could Not 'Miss' Missile Approaching MH17 Flight in Donbass
Malaysian Airlines' Boeing 777 crashed in eastern Ukraine in July 2014 while flying to Kuala Lumpur from Amsterdam. All 298 passengers and crew aboard the aircraft died in the incident.

However, Russia's Almaz-Antey concern rejected the findings of the probe, saying that three simulations showed that the missile was launched from the Zaroshchenskoye area, which was controlled by Ukraine's army at the time of the incident. 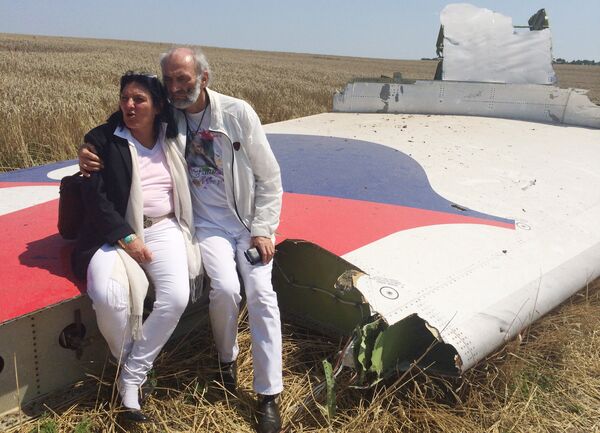 Jerzy Dyczynski and Angela Rudhart-Dyczynski whose daughter, 25-year-old Fatima, was a passenger on Malaysia Airlines flight MH17, sit on part of the wreckage of the crashed aircraft in Hrabove, Ukraine, Saturday, July 26, 2014
© AP Photo / Nicholas Garriga

"Focusing on the search for those who downed the plane, the investigation deviated from the study of the main question: how could it happen that the flights of civil aircraft continued over the zone of hostilities?" Russian political analyst Vladimir Ardayev wrote in his opinion piece for RIA Novosti.

He recalled that Ukraine failed to close its airspace over the territory where hostilities with the use of combat planes and air defense systems were in place at the time. Kiev only fully closed Ukrainian airspace three hours after the MH17 was downed. 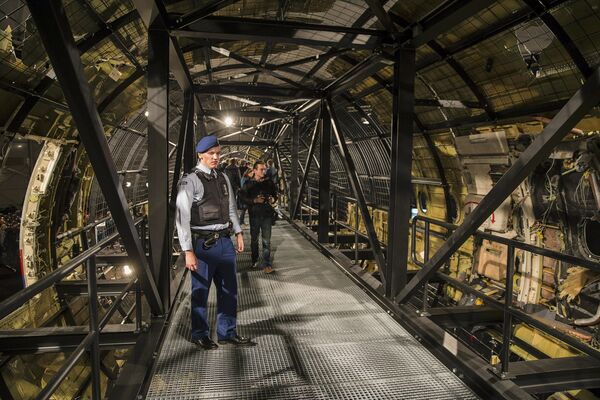 A military policeman stands guard in the reconstructed MH17 airplane after the presentation of the final report into the crash of July 2014 of Malaysia Airlines flight MH17 over Ukraine, in Gilze Rijen, the Netherlands, October 13, 2015
© REUTERS / Michael Kooren

"The question is how it was done and whether the measures taken by Kiev were sufficient to fully ensure the security of the airspace over Ukrainian territory," Vladimir Ardayev quoted Melnichenko as saying.

"The main threat to flight safety in the region at the time was that neither Ukraine nor the European Organization for the Safety of Air Navigation, of which Ukraine is a member, duly published information that the airspace over the territory on which the fighting is conducted should be closed to the full depth (that is, the height) of the flight," he pointed out.

Could Ukraine Have Destroyed Evidence of Its Responsibility for MH17 Crash?
Melnichenko cited both political and financial reasons for Ukraine's foot-dragging on the closure of its airspace. According to him, closing the sky over part of Ukrainian territory would mean Kiev's recognition of the fact that it was unable to control the situation on its own territory.

Financial reasons pertain to the fact that the use of Ukrainian airspace by foreign air carriers contributes millions of dollars to the country's state coffers.

Melnichenko recalled that on July 12, Ukraine published a Notice To Airman or NOTAM which restricted the airspace over East Ukraine up to the level of 9.75 kilometers (32,000 feet), which, however, failed to save the MH17 plane which was downed at an altitude of 10 kilometers (33,000 feet).

In this regard, aviation security expert Mark Zee specifically pointed to the "vague language" employed in the Ukraine-related NOTAM.

"To the pilot, to the dispatcher, and to the crew of MH17 it's indecipherable. It looks the same as every other routine TRA [Temporary Restricted Area]," Zee pointed out in his article titled "MH17: a darker truth" and published at the medium.com website. 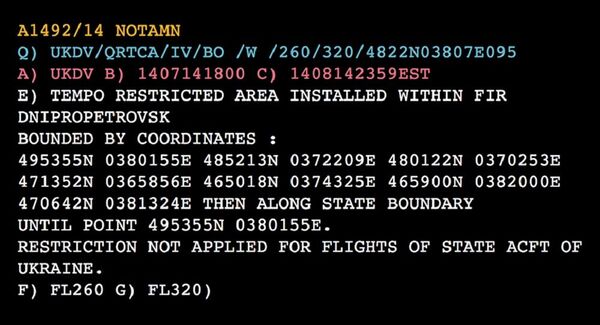 Melnichenko, for his part, said that pilots sometimes receive dozens of pages of NOTAM warnings and that they just have no time look through all of them.

According to him, "Ukrainian authorities neglected all these circumstances when instead of fully closing the flights over the territory of hostilities they just issued an absolutely incoherent notification; passengers and crew of almost any aircraft could fall victim to their actions."

As for the JIT's allegations that the MH17 airliner was allegedly shot downed by a Buk missile system, which was wheeled in from Russian territory, they hold no water, spokesman for Russia's Almaz-Antey concern Mikhail Malyshevsky told Sputnik.

The JIT's conclusions "cannot have sufficient technical justification to assert that Russia in any way could be involved in the crash of the Malaysian Boeing in the summer of 2014," Malyshevsky said, adding that the plane was downed by a missile equipped with the obsolete 9P314warhead, missiles which have long been out of service in Russia, but which are still used by Ukraine's armed forces.

The Russian military in turn draw attention to the fact that the main sources of information for the JIT's investigation were the Internet and Ukraine, a country a priori responsible for the crash of the aircraft over its territory.

Decoding of Russia's MH17 Radar Data May Take Minutes, Dutch Accusations Biased
Almaz-Antey experts also seriously doubt the reliability of the results of field experiments carried out by international investigators, claiming that they, in particular, used an American missile that is structurally different from the Buk rocket. While the concern conducted its tests with a rocket from this complex.

Although Almaz-Antey and the Russian Defense Ministry handed over all their documents on the matter to the international investigation team, it is still unclear whether they will be taken into account. The JIT's mandate expires at the end of January 2018, when the group is due to submit its final report.

"The investigation prompts a lot of questions because there are serious problems pertaining to proof of the versions. The data collected by the JIT is unlikely to help in exactly determining what happened, and I doubt that new evidence will appear before January 1, 2018," Russian law expert lim Bishenov told Sputnik.