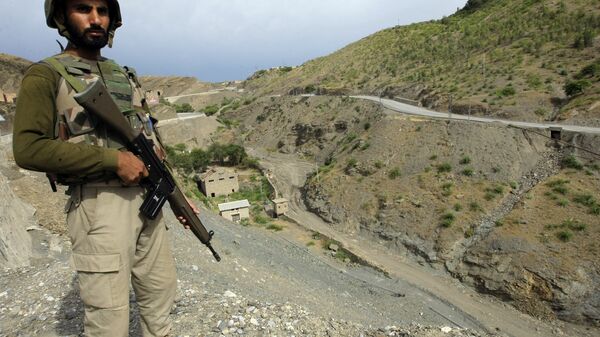 Pakistan has launched an offensive to "wipe out terrorists" in the Rajgal Valley in its Khyber District, which borders Afghanistan, where Daesh is "getting stronger," according to an army spokesman.

The district is part of the Federally Administered Tribal Areas of Pakistan (FATA).

The operation, Khybar-4, will cover about 250 square kilometers in which pro-Daesh groups like Jamaatul Ahrar and Lashkar-e-Jhangvi, as well as the Pakistani Taliban, have become entrenched. This is "the most critical area in the [FATA]," said Maj. General Asif Ghafoor, director general of Pakistan's Inter-Services Public Relations on Sunday.

Daesh's presence across the border is increasing, "necessitating this operation to eliminate influence of Daesh being exported to Pakistan through Rajgal valley," he said, according to the Dawn news agency.

Ghafoor rejected the notion that Daesh has any organized presence in Pakistan, however.

"We will not allow them to establish themselves. In Afghanistan, yes, it is getting stronger, but we don't believe it is the same as the Daesh in the Middle East," he said.

"In Pakistan, the Jamaat-ul-Ahrar has shown an alliance with Daesh… Daesh as an organization does not exist, but if splinter groups of the Tehreek-i-Taliban Pakistan and other terror groups try to jump on the Daesh bandwagon, we are already taking care of them through other means, like in the Khyber-4 operation," he said.

Though Afghan forces have been informed and Afghanistan may support the operation on their side of the border, the offensive is a purely domestic affair, Ghafoor said.

"No other force will have boots on the ground in our country. All operations are conducted by Pakistani security forces," he asserted. He also couldn't resist a minor dig at Pakistan's troubled neighbor: "If the Afghan army were as capable as the Pakistan Army, then maybe the issue [of terrorism] would be resolved sooner," Ghafoor said.

Pakistan is in the midst of a push, dubbed Operation Radd-ul-Fasaad, to snuff out terrorism within the country. Khyber-4 falls under the umbrella of this operation, as does a large-scale project to fence the border with Afghanistan and Iran. Some 46 major operations have been launched under Radd-ul-Fasaad so far, Ghafoor noted, and more than 1,760 joint checkposts established in coordination with police and other law enforcement agencies.

"We are working brick by brick to bring normalcy back to Pakistan with the support and in support of other institutions," he said.