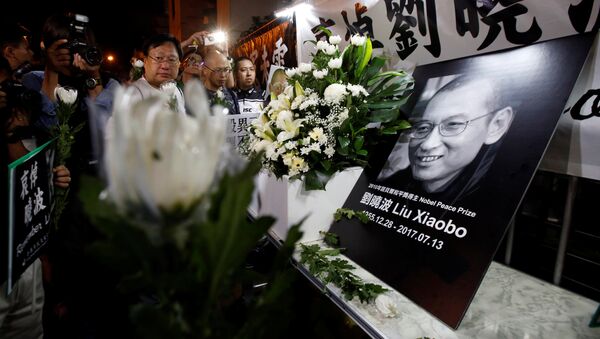 “Liu Xiaobo’s condition continued to deteriorate and [he] went under intensive care on July 10. He died of organ failure on July 13,” the statement read.

China Calls on Germany to Refrain From Interfering in Case of Nobel Laureate Liu
The Chinese Nobel Laureate was transferred to a hospital in northern China’s Shenyang city in Liaoning province in June, after he was diagnosed with late-stage liver cancer in May. Chinese authorities tried to demonstrate that they did their best to treat Liu’s sickness, inviting doctors from Germany and the United States to visit him in the hospital last week.

Liu was tried for "inciting subversion of state power" in 2009, a year after publishing the Charter 08 manifesto calling for overhauling democratic reforms in China. He was subsequently convicted and sentenced to 11 years in prison. In 2010, he was awarded the Nobel Peace Prize, triggering a massive diplomatic row between China and Norway. His prison term had been expected to be completed by 2020.

"We now have to come to terms with the fact that his chair will forever remain empty. At the same time it is our deep conviction that Liu Xiaobo will remain a powerful symbol for all who fight for freedom, democracy and a better world," the Norwegian Nobel Committee said in a statement on Thursday after learning the news of Liu's death.

Norway, China to Restore Ties After 2010 Row Over Nobel Prize for Liu Xiaobo
The best way for human rights activist in China to preserve Liu’s legacy is by promoting the messages he expressed over the year, Patrick Poon, a China researcher with Amnesty International, told Sputnik.

"Promoting what Liu said can help continue to raise his legacy. We can explain to people what he meant by saying he has no enemy," Poon said.

In the Charter 08 manifesto, Liu expressed hopes that fellow Chinese citizens who feel a similar sense of crisis, responsibility, and mission, whether they are inside the government or not, and regardless of their social status, will set aside small differences to embrace the broad goals of establishing "a free, democratic, and constitutional country."