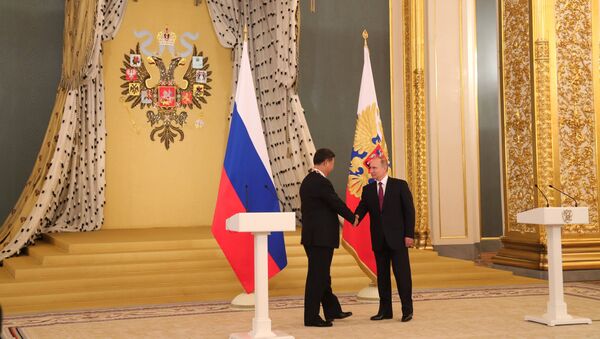 © Sputnik / Michael Klimentyev
/
Go to the photo bank
Subscribe
Russia looked to be focused on boosting economic ties with China, while Beijing seemed to highlight common interests in geopolitics during the official visit of Chinese President Xi Jinping to Russia this week, experts told Sputnik.

MOSCOW (Sputnik), Tommy Yang — After meeting Russian President Vladimir Putin in Moscow on Tuesday, his 23rd meeting with the Russian leader after taking office as the Chinese president in 2013, Xi stressed he agreed with Putin that "today Chinese-Russian relations are the best they have ever been."

Strategic Rapprochement: NATO Expansion Brings Russia, China Closer
However, in his speech at the joint press conference with Putin, the Chinese leader focused on the importance of two joint statements between to two countries on Further Expansion of Comprehensive Partnership and Strategic Cooperation and on the Current Status of Global Affairs and Important International Issues, as well as an Action Plan to Implement the Provisions of the Treaty on Good-Neighbourliness, Friendship and Cooperation for 2017–2020.

After briefly mentioning rapid growth in bilateral trade this year, Xi did not name any of the specific business deals both sides reached during his meeting with Putin. At the same time, the Russian president dedicated almost half of his speech to economic cooperation between Russia and China.

Xi After Talks With Putin: China-Russia Cooperation 'Historical Choice' (VIDEO)
Putin spoke of the progress of major energy cooperation projects between the two nations, including the Power of Siberia gas pipeline and the Yamal liquefied natural gas production facility. The Russian president also highlighted a number of prospective joint projects in the nuclear power industry, aviation industry and transportation industry, including a high-speed railway project between Moscow and Kazan.

After the press conference, the Kremlin released a full list of commercial agreements signed between the two countries, while the Chinese Foreign Ministry did not include any of the specific projects in their statements regarding Xi’s visit to Russia.

The difference in expectations between Russia and China from their bilateral relations is understandable, political experts told Sputnik.

"China and Russia have different purposes when trying to build a strong partnership with each other. Beijing is looking for a strategic partner to resist pressure from Western countries such as the US or Japan, while Moscow focuses more on economic benefits amid Western sanctions and plunging global oil prices," Yang Shu, director of Central Asia Institute under Lanzhou University and deputy director of Sino-Russia Relations History Research Institute, said.

Despite China’s willingness to strengthen its strategic partnership with Russia, it is unlikely for Beijing to seek a military alliance with Moscow, the Lanzhou-based expert suggested.

"They do not have a common enemy or target. Most of the Chinese scholars who study Sino-Russia relations are against the idea of a military alliance between the two nations," Yang said.

While common interests in global geopolitics make Russia and China a perfect match for each other in strategic cooperation, stronger business ties depend on rules of the market economy, experts said.

North Korea to Be One of 'Key Points' of Putin-Xi Talks in Moscow
For example, foreign ministries of China and Russia released a joint statement regarding to issues on the Korean Peninsula on Tuesday following the meeting between Xi and Putin. But major economic projects between the two nations mostly stayed within prominent state-owned-enterprises such as Gazprom, Rosneft and China National Petroleum Corporation.

The Shanghai-based expert explained that if there are substantial profits, private Chinese enterprises would be willing to do business with Russian companies without incentives or push by authorities in Beijing.

"Economic interests have been diversified in China. Private enterprises have become a big part of the Chinese economy. The enthusiasm of private Chinese enterprises (in doing business with Russia) has not been mobilized," he said.

Russia to Support China's 'One Belt, One Road' Initiative by All Means - Putin
Yang Shu, the Lanzhou-based expert, believes China has a lot of potential in helping Russia with development of the Far East region.

"The openness towards Chinese capital and labor in the Far East region of Russia is still very limited. How much more room there will be for Chinese businesses in the development of this region is a good indicator of improved understanding of China from the Russian side," he said.

In addition, military technology, especially advanced military equipment, is still an area China hopes to work closely with Russia in, according to experts.

"Under pressure from Western sanctions, advanced military technology is one of key export products for Russia," Li Chuanxun, a professor at Russia Studies Institute under Heilongjiang University in northeast China, told Sputnik.

Li added that Russia is also one of the few countries where China can import advanced military equipment from.

000000
Popular comments
Every year, more than 300,000 Chinese students go abroad to study on American Universities and high schools, so after three decades of cooperation, more than 3 million Chinese students from the "ruling class" in China, have been in America, and have absorbed U.S. economic, scientific and cultural methods which they don´t want to lose. Besides, the U.S. has been the first trade partner of China during the last three decades. So, even if the Chinese Government doesn´t want Washington to meddle and interfere in China´s internal affairs, they also don´t want to lose the U.S. as a partner. Trade and exchange with Russia is increasing, and on the midterm can be among the top 5 trade partnes of China, but still is far from the levels reached by the U.S. (and more taking into account other Anglo nations like the UK, Canada and Australia) There is a deep dependence from China on the Anglosphere (USA, UK, Canada, Australila, NZ)
enrique_costas
10 July 2017, 12:29 GMT
000000
Newsfeed
0
New firstOld first
loader
LIVE
Заголовок открываемого материала
Access to the chat has been blocked for violating the rules . You will be able to participate again through:∞. If you do not agree with the blocking, please use the feedback form
The discussion is closed. You can participate in the discussion within 24 hours after the publication of the article.
To participate in the discussion
log in or register
loader
Chats
Заголовок открываемого материала
Worldwide
InternationalEnglishEnglishMundoEspañolSpanish
Europe
DeutschlandDeutschGermanFranceFrançaisFrenchΕλλάδαΕλληνικάGreekItaliaItalianoItalianČeská republikaČeštinaCzechPolskaPolskiPolishСрбиjаСрпскиSerbianLatvijaLatviešuLatvianLietuvaLietuviųLithuanianMoldovaMoldoveneascăMoldavianБеларусьБеларускiBelarusian
Transcaucasia
ԱրմենիաՀայերենArmenianАҧсныАҧсышәалаAbkhazХуссар ИрыстонИронауОssetianსაქართველოქართულიGeorgianAzərbaycanАzərbaycancaAzerbaijani
Middle East
Sputnik عربيArabicArabicTürkiyeTürkçeTurkishSputnik ایرانPersianPersianSputnik افغانستانDariDari
Central Asia
ҚазақстанҚазақ тіліKazakhКыргызстанКыргызчаKyrgyzOʻzbekistonЎзбекчаUzbekТоҷикистонТоҷикӣTajik
East & Southeast Asia
Việt NamTiếng ViệtVietnamese日本日本語Japanese俄罗斯卫星通讯社中文（简体）Chinese (simplified)俄罗斯卫星通讯社中文（繁体）Chinese (traditional)
South America
BrasilPortuguêsPortuguese
NewsfeedBreaking
22:17 GMTUK Calls Renewable Energy Main Alternative to Gas as Energy Crisis Deepens
22:12 GMTGreenland Foreign Minister Demoted Over Pro-Independence Statements - Reports
22:04 GMTUS Citizen Pleads Guilty to Helping North Korea Evade Sanctions
21:57 GMTGreens to Strive for Vice-Chancellor Office in Future German Government - Reports
21:54 GMTNorth Korea Has Fired 'Unidentified Projectile' into Sea of Japan, Seoul's Military Claims
21:34 GMTPlumbing Poverty: Millions of America’s Poorest Don’t Have Running Indoor Water - Report
20:54 GMTAfter Manchester United’s Loss to Aston Villa, Will Ole Gunnar Solskjaer Make it Through November?
20:34 GMTIndiana Beaches Forced to Close after Alleged US Steel Plant Spill
20:07 GMTSyrian Foreign Minister Urges Turkey, US to Withdraw Troops at UNGA
19:57 GMTState Department Spokesperson Ned Price Says Tested Positive for COVID-19
19:52 GMTUS Ready to Meet With North Korea Without Preconditions, State Dept. Says
19:47 GMTHurricane Sam Weakens but Remains Powerful, No Threat to Land
19:41 GMTGerman Elections: Does CDU Have Any Chance of Forming Coalition With Greens & Free Democrats?
19:25 GMTFuture Space Telescope Would Have Spotted Asteroid That Passed Earth Undetected, NASA Tells Media
19:18 GMTFlorida State Govt. to Probe Facebook For Election Interventions
19:18 GMTRussel Brand Shocked at Prospect That Trump 'Was Right' About Clinton & Russia Collusion
19:16 GMTUS Jury Reaches Verdict on R. Kelly: Finds Singer Guilty of Racketeering in Sex Trafficking Case
19:06 GMTRussian Military: Militants Launched Drone Toward Hmeimim Airbase, Pantsir-S Shot It Down
18:58 GMTDelta Variant May Yet Worsen to Slow America’s Return to Work, Fed’s Reserve Governor Says
18:56 GMTLabour MPs Revolt Against Party Leaders, Overwhelmingly Reject AUKUS Pact as Threat to World Peace