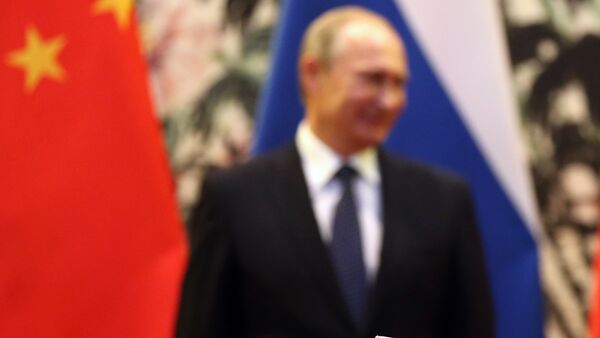 © AFP 2021 / HOW HWEE YOUNG
Subscribe
The Russo-Chinese partnership is contributing a lot to global peace and prosperity, Chinese academic Dr. Shen Dingli told Radio Sputnik. According to Dr. Shen, the expansion of NATO, which poses a challenge to both Russia and China, has brought the two countries closer together.

The leaders of the two countries signaled mutual interest in boosting cooperation and developing what Xi called a "strategic alliance."

"The fast-growing, pragmatic cooperation has become the locomotive in the continuous development of China-Russia relations," Xi highlighted.

Russia to Support China's 'One Belt, One Road' Initiative by All Means - Putin
The Chinese president noted that Beijing and Moscow plan to enhance collaboration and coordination in international affairs to cope with global challenges.

"We are committed to joint efforts with Russia to coordinate and cooperate in international affairs and jointly with the international community to take efforts to optimize global management, protect and maintain strategic balance and stability around the world in order to jointly overcome global threats and challenges such as terrorism, jointly stimulate the process of political settlement in hot spots and form a new type of interstate relations on the basis of cooperation and mutual benefit," Xi said following his meeting with Putin.

Commenting on Xi's visit to Moscow, Dr. Shen Dingli, Associate Dean at the Institute of International Studies at Shanghai-based Fudan University, said that the Sino-Russian relationship could become the key to world peace.

"Russia and China should walk together to make the world peaceful and prosperous," Dr. Shen emphasized in his interview with Radio Sputnik.

He noted that Beijing and Moscow need to coordinate their approaches to global issues and not allow the US to "exercise unnecessary and unwarranted pressure on the other countries."

To illustrate his point, Dr. Shen called attention to the recent developments in Syria.

According to the Chinese scholar there are many reasons behind the Syrian crisis, but the principle one is the US' war on Iraq. A series of revolutions in the Middle East, encouraged by Washington, also dealt a heavy blow to the region's stability, Dr. Shen remarked.

"China and Russia have been very much opposed to such a crisis. And we know that the US has been behind such a development," he told Sputnik.

Russia, China Call for Unbiased Probe Into Use of Chemical Weapons in Syria
The academic noted that although Washington may have triggered this chain of events unintentionally, it is the US who is primarily responsible for the ongoing crisis in the region.

"Now with the mess, the US is encouraging the opposition in Syria to [attack] the legitimate government," he said.

In contrast, Russia and China are supporting the legitimate government in Syria and making efforts to encourage the national reconciliation between the government and the opposition, Dr. Shen highlighted.

"We hoped that the US would play a positive role rather than supporting one party against the other party and even launching military strikes against the Syrian [Arab Army] Air Force," he underscored.

Strategic Moment: Why China's Xi Visited Russia Right Ahead of G20 Summit
Speaking to Radio Sputnik, Dr. Shen also shed light on the Sino-Russian economic cooperation and answered the question why there have been no reports of significant breakthroughs in this sphere during the recent talks.

"The two leaders have met three times this year and have met 20 times over the past five years. They have [struck] a lot of agreements. So you cannot expect the two leaders to [make] lots of agreements each time," the Chinese academic noted, referring to the fact that Putin and Xi had made a significant progress in this area in the course of the Belt and Road Forum for International Cooperation in May.

"It takes time for two countries to find a new area to cooperate [on]," Dr. Shen remarked, adding that even friends could have differences and sometimes time is needed to work out a mutually beneficial agreement.

Dr. Shen emphasized that Sino-Russian ties are rooted deep in history. Furthermore, in the middle of the 20th century the relationship between the two countries was booming. Unfortunately, political differences then pulled them apart.

However, following the end of the Cold war and the settlement of the border dispute the two countries came together again, he stressed.

Dr. Shen underscored that currently the Sino-Russian partnership is dependent not on ideology, but on mutual respect and economic interests. According to the academic this partnership helps reducing tensions simmering over both the Iranian nuclear issue and North Korea's nuclear issue.

"All these [issues] are putting us together," he noted.

Incredibly as it may seem, the United States has played an important role in accelerating the Sino-Russian strategic rapprochement, the academic pointed out, referring to the NATO bloc expansion both in the West and in the East.

"Our countries should walk together to have unity and make the world peaceful and prosperous," Dr. Shen stressed.

000000
Popular comments
"Mutual respect and economic interest" Is this not what is needed in the world, instead of some country /countries who declared themselves to have the right, to not only dictate to others how they should run their affairs, but reckon themselves as the world's judge, jury, and executioner. Under this false thinly-veiled proposed benevolence and democracy -- they are leveling cities, towns, suburbs, and the homes of millions of ordinary people, who never hurt anybody. These people are uprooted and driven to refugee camps and suffer from hunger, thirst, and exposure. What is happening to the world? Who will stand up against these instigators /agitators? Who will suppress their murderous rampage?
Elsa JV
5 July 2017, 23:32 GMT
000000
Newsfeed
0
New firstOld first
loader
LIVE
Заголовок открываемого материала
Access to the chat has been blocked for violating the rules . You will be able to participate again through:∞. If you do not agree with the blocking, please use the feedback form
The discussion is closed. You can participate in the discussion within 24 hours after the publication of the article.
To participate in the discussion
log in or register
loader
Chats
Заголовок открываемого материала
Worldwide
InternationalEnglishEnglishMundoEspañolSpanish
Europe
DeutschlandDeutschGermanFranceFrançaisFrenchΕλλάδαΕλληνικάGreekItaliaItalianoItalianČeská republikaČeštinaCzechPolskaPolskiPolishСрбиjаСрпскиSerbianLatvijaLatviešuLatvianLietuvaLietuviųLithuanianMoldovaMoldoveneascăMoldavianБеларусьБеларускiBelarusian
Transcaucasia
ԱրմենիաՀայերենArmenianАҧсныАҧсышәалаAbkhazХуссар ИрыстонИронауОssetianსაქართველოქართულიGeorgianAzərbaycanАzərbaycancaAzerbaijani
Middle East
Sputnik عربيArabicArabicTürkiyeTürkçeTurkishSputnik ایرانPersianPersianSputnik افغانستانDariDari
Central Asia
ҚазақстанҚазақ тіліKazakhКыргызстанКыргызчаKyrgyzOʻzbekistonЎзбекчаUzbekТоҷикистонТоҷикӣTajik
East & Southeast Asia
Việt NamTiếng ViệtVietnamese日本日本語Japanese俄罗斯卫星通讯社中文（简体）Chinese (simplified)俄罗斯卫星通讯社中文（繁体）Chinese (traditional)
South America
BrasilPortuguêsPortuguese
NewsfeedBreaking
08:18 GMTAUKUS 'Complements' Quad: Australian PM Says India Backs the New Trilateral Pact After Meeting Modi
07:51 GMTEx-Police Officer Convicted of George Floyd's Murder Appeals Verdict, Reports Suggest
07:46 GMTMoscow, Kabul Discussing Possible Visit by Taliban Government Delegation, Source Says
07:42 GMTJapan, Russia Agree on Development of Bilateral Ties Through Dialogue, Government Says
07:39 GMTUK Systematically Ignores Russia's Requests for Legal Assistance, Moscow Says
07:25 GMTSweden, Denmark, and Norway Embark on New Military Cooperation Against 'Big Neighbour in the East'
06:55 GMTCanada Agrees to End Deportation Hearings Against Now-Deceased Ex-Nazi Oberlander
06:31 GMTPhones of Five Incumbent French Ministers Were Targeted by Pegasus Spyware, Report Says
06:17 GMTFrance, Sweden to Deepen Defence Cooperation to Meet 'Challenges' From Russia, China
06:00 GMTNorway Becomes First Western Country to Raise Key Rate Since Start of COVID-19 Pandemic
05:56 GMTHunter Biden Asked for $2 Mln From Democratic Donors to Help Unfreeze Libyan Assets: Report
05:30 GMTPalestinians to Harvest Olives But They're Wary of Settlers, Here's Why
04:38 GMTTaliban Want to End Drug Trafficking From Afghanistan, Seeking Russian Assistance, Official Says
04:30 GMTSlippery Slope: Goofy Doggo Doesn’t Like Stairs
04:22 GMTLive Updates: India's Total COVID-19 Cases Rises to 33.59 Mln, Death Toll Stands at 446,368
03:59 GMTTrump Vows to Use 'Executive Privilege' to Stonewall Jan. 6 Panel Subpoenas
03:56 GMT'Harry Potter' Actor Tom Felton Carted From Golf Tournament After Collapsing During Event
03:23 GMTUS Mainstream Media Silent as Book Suggests Authenticity of Hunter Biden Emails on Burisma, China
03:09 GMTUS Envoy Lenderking Says Dialogue With Russia on Yemen ‘Very Helpful’
02:56 GMTAudit Mania