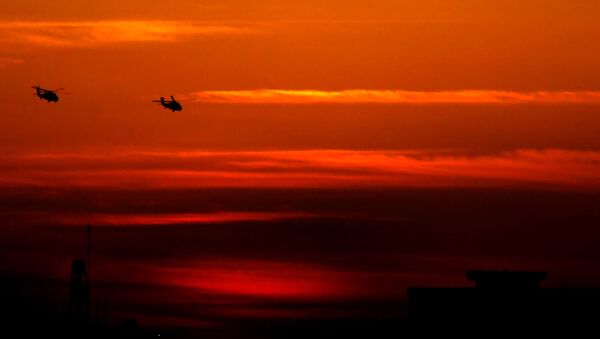 © AFP 2021 / JOSEPH EID
Subscribe
A US Department of Defense inspection has found that the Army’s programs for the funding and training of H-60 Black Hawk helicopter pilots are inadequate, leaving new pilots of the thousands-strong helicopter fleet underfunded and undertrained.

"The Army did not provide adequate funding and training for H-60 pilots on the new equipment," according to the Pentagon's Inspector General's (IG) office 30-page audit of the program. "This occurred because Army officials did not agree which Army organization was responsible for funding and conducting H-60 new equipment training."

The report found that the 1,390 H-60 pilots that the Army wants to train between 2018 and 2035 (about 77 pilots per year) will need an additional $152.9 million to be properly equipped to fly the multipurpose helicopters.

Tested in the mid-1970s and entering Army service in 1979, the Black Hawk has remained relevant through utility and upgrades. In 2006, the US Army began to replace the original UH 60As with the improved UH 60M model, which includes new features such as a digital cockpit display and an autopilot. The Army is also developing another model, the UH-60V, which will feature a modular flight program allowing for new software to easily be added.

"The H-60V cockpits are expected to be visually identical to the H-60M cockpits and allow an H-60M pilot to fly an H-60V helicopter with limited additional training," the audit said.

By 2035, the Army intends to entirely replace outmoded UH 60As and UH 60Ls with the newer models. On July 3, Sikorsky announced that they had inked a $3.8 billion deal to build an additional 257 Black Hawks, most of which would go to the US military.

The Army issued a statement as part of the IG report. Gen. Dan Allyn, who was the Army Vice Chief of Staff until his June 2017 retirement, said that he "agreed with our recommendation to provide future training capacity for new equipment training to all pilots on UH 60M and UH 60V helicopters," according to the IG report.

The Sikorsky H-60 Black Hawk is the backbone of the Army's fleet of helicopters, with over 2,000 of them in service with the US Army alone. The Air Force and Marines also use their own variants in much smaller numbers, and two dozen other nations have purchased Black Hawks for use in their own armed forces. The second largest owner is Japan, which operates a fleet of about 180