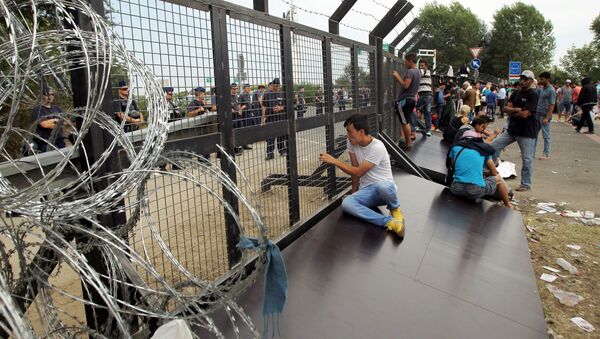 Open Season: Ordinary Czechs Get Right to Shoot Terrorists on Sight
Earlier this month, the EU Commission launched legal proceedings against the Czech Republic, Hungary and Poland for non-compliance with the EU's refugee quotas.

Since then, Hungary and Poland have not resettled a single refugee, while the Czech Republic initially accepted 12 people but has refused to take anyone else since August 2016. Between them, the three countries were supposed to take 11,000 refugees under the plan.

Former Slovakian Prime Minister Jan Carnogursky told RIA Novosti that the migrant flow from Syria to Europe is a result of Western European politics in the Middle East, and the Western insistence that Eastern Europe bear its share of the burden is unfair.

"People can't survive in their homeland for economic reasons, so they go to the EU and we are made to take them," Carnogursky said.

Macron: 'We Must Welcome Refugees Because It Is Our Tradition and Our Honor'
"The problem is that the EU countries pursue an atrocious policy in the Middle East. Take Libya, for example. Today, the main flow of migrants to the EU goes through this country. But it was France that overthrew the stable Libyan government in 2011, provoking the increase in migration. So let them take responsibility, not us!"

Carnogursky, who was Prime Minister of Slovakia from 1991-1992 and served as leader of the Christian Democratic Party (KDH), said that his country was keen to ensure that migrants would be able to assimilate into society.

Politicians in Poland have also expressed unwillingness to accept migrants who are Muslims. Earlier this month, Interior Minister Mariusz Blaszczak connected a recent string of terrorist attacks in Western Europe to "the indulgence of multiculturalism and political correctness in Western Europe (which) reaps tragic consequences."

Ukrainian Migrants: The Time Bomb That Could Tear Poland Apart
"We are tightening Poland's external borders and also helping our partners in the EU. We have moved away from this tragic decision to open borders and also our country to refugees," Blaszczak said.

"The Czech Social-Democratic Party, which is currently the main party despite some weakening, knows that if it supports taking refugees it will deepen its fall in support. On the other hand, the ANO party is gaining strength and its leader Andrei Babish won't undermine their possibility for success in the forthcoming parliamentary elections by agreeing to take refugees," Miklas explained.

"The ruling politicians are aware of the popularity of anti-immigrant sentiments and therefore try to play the role of heroes defending 'national interests' against the EU. In fact, they are primarily working for their own interests, and the refugee crisis is a good excuse to divert attention from real problems inside and outside the country and help maintain their position," the analyst said.

000000
Popular comments
The immigrant crisis is effectively an 'invasion' whereby government servants like Turkey's Erdogan seek to establish political support in foreign lands through mass migration. If most of the immigrants are muslim they form a voting bloc which is more open to supporting muslim values including sharia law.