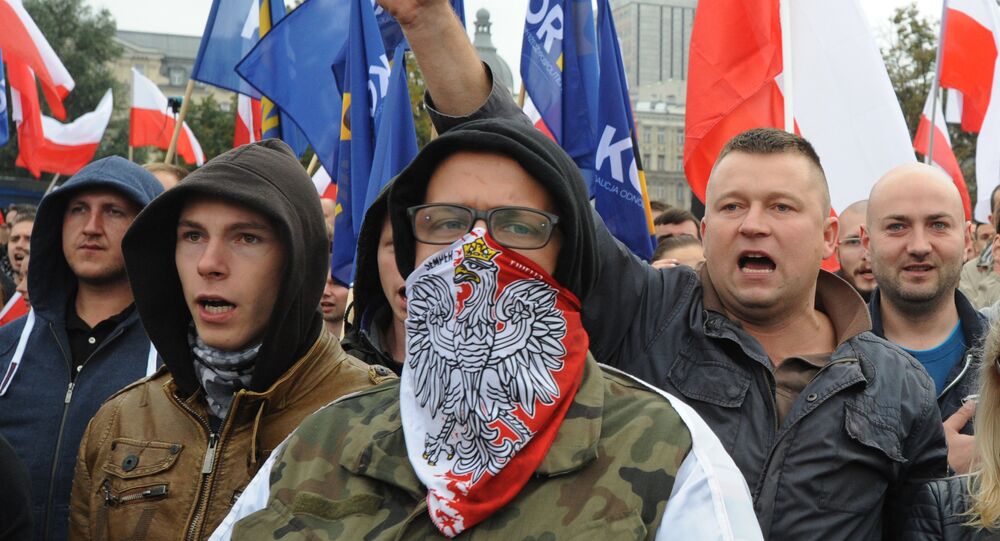 ‘Poland Drifting Away From EU’ Amid Refugee Spat

Poland is drifting away from the EU, which demands that Warsaw accept refugees from the Middle East and North Africa, former Polish member of the European Parliament, Joannа Senyszyn, told Sputnik.

“The EU has repeatedly warned Poland over its refusal to take in refugees and [the changes to the country’s constitutional court, which Brussels believes pose a serious challenge to the rule of law.] Unfortunately, we will have to suffer the consequences. Maybe the government reconsiders and agrees to accept at least some of the women and children just like the previous Cabinet of [Prime Minister] Ewa Kopacz promised. In any case, [German] Chancellor Merkel and the European commissioner from Luxembourg sided with Macron,” Joannа Senyszyn told Sputnik Poland.

© Photo : Pixabay
EU Begins Infringement Procedures Against Czech Republic, Hungary, Poland Over Refugees
She added that since the Law and Justice Party (PiS) came to power, Poland has been unable to find a common language with either its EU partners or Russia.

“I think that our relations with the US will not be as rosy as the PiS imagines. During the third meeting in Geneva to assess the UN’s report on the human rights situation in Poland, the US and even the Vatican criticizes us, which means that the policy of the ruling Law and Justice party is alienating [Poland’s partners in the world],” Senyszyn noted.

In a June 21 interview with a roster of European newspapers ahead of his first European Council meeting with EU leaders in Brussels, French President Emmanuel Macron warned about the price EU countries should pay for refusing to abide by European principles.

“Europe isn’t a supermarket. Europe is a common destiny. It is weakened when it accepts its principles being rejected. The countries in Europe that don’t respect the rules should have to face the political consequences,” Macron said.

When asked by Sputnik which countries Emmanuel Macron had in mind and what consequences he was talking about, former Polish member of the European Parliament, Joannа Senyszyn, said that he primarily referred to Poland, Hungary and the Czech Republic, which refuse to accept migrants and only want to get money from Brussels, while failing to respect common European values.

During the opening day of last week’s EU summit in Brussels, the participants discussed measures to speed up the creation of a European Army and agreed to step up their defense cooperation.

When answering a question whether Poland would join in with the European defense alliance to compete with NATO and how the US would respond to this, she said that because the US is against the idea of a European defense union, the EU should act as one and rely on its own resources, especially now that NATO’s future looks uncertain.

“The EU needs to be more independent and consolidated. Is Poland ready to come along? Decisions like this require a majority vote and I believe that because the EU countries overwhelmingly support this project it will be realized,” Joannа Senyszyn said.

“With the PiS at the helm, Poland is drifting away from the EU, that’s why I believe that we are lucky that in keeping with the Lisbon Treaty no country can be kicked out of the European Union,” she added.

In an interview published on Monday, Jacek Saryusz-Wolski, a Polish member of the European Parliament, aid that Poland was not obligated to accept migrants from southern regions like Africa and the Middle East, as the country has already taken in around 1.4 million migrants from Ukraine.

© REUTERS / Kacper Pempel
'Blackmail': Poland Disagrees With Mixing Issues of Migrants, Financing From EU
In September 2015, the heads of the EU interior ministries adopted the European Commission’s proposal on the distribution of 160,000 undocumented migrants, staying on the territory of Italy and Greece, among the EU countries, under the quota plan.

The Czech Republic, Hungary and Poland opposed the proposal.

On June 14, the European Commission announced the launch of infringement procedures against the three aforementioned states.