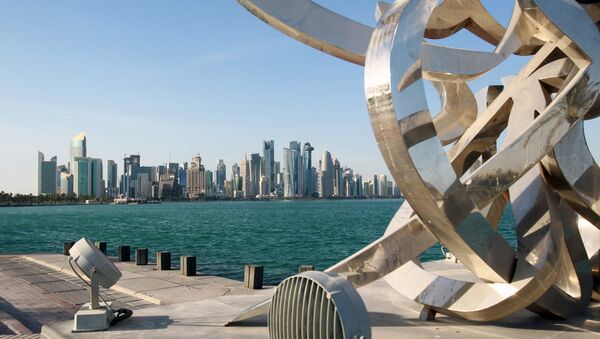 Saudi Arabia and its neighboring countries are putting pressure on Turkey to withdraw its troops from Qatar.

Turkey Sends 5,000 Tonnes of Foodstuffs to Qatar Amid Arab States' Row
In response to Turkey's refusal to support the blockade against Qatar, Saudi Arabia is stepping up tension in the Kurdish issue. Recently, Saudi diplomats have held a number of negotiations with several Kurdish parties in Turkey.

Samer Saleha, a political analyst, told Sputnik, "So far there are no prerequisites for improving the situation in the Persian Gulf. This means that the situation will have a negative impact on Turkey at the political and economic levels. "

According to the expert Turkey was in the epicenter of the crisis between the Gulf countries because it is connected to all of the conflicting parties.

“Turkish President Erdogan has already said that the demands of the Gulf countries are interference in the bilateral affairs of Turkey and Qatar, as they themselves have the right to choose, with whom to make friends and make alliances,” Saleha said.

The ultimatum demands that Qatar, among other things, cut its ties with Iran and close a Turkish military base on its soil.

It also demands that Al Jazeera and its affiliates be shut down. Other demands call on Doha to publicly denounce relations with Islamist groups, end the suspected financing of terrorism and hand over persons designated as terrorists by Saudi Arabia, the United Arab Emirates, Bahrain and Egypt.

Turkey Could Be 'Next Target' After Qatar in Gulf Diplomatic Crisis
Moreover, Qatar is demanded to pay financial compensation, although the sum was not reported.

In response, Doha described the demands as "unrealistic" and "illegal" and urged for them to be revised after being given 10 days to comply. According to the Qatari foreign minister, the sanctions imposed are an attempt at tampering with the nation’s sovereignty.

On June 5, a number of countries, including Saudi Arabia, the UAE, Bahrain and Egypt, cut diplomatic ties with Qatar and embargoed all sea, air and land traffic to the country, accusing Doha of supporting terrorist groups, particularly the Muslim Brotherhood terrorist movement, as well as of interfering in other countries' domestic affairs.

Several other states in the region have reduced diplomatic relations with the country. Kuwait and Oman are the only members of the Gulf Cooperation Council (GCC) that haven’t joined the blockade.