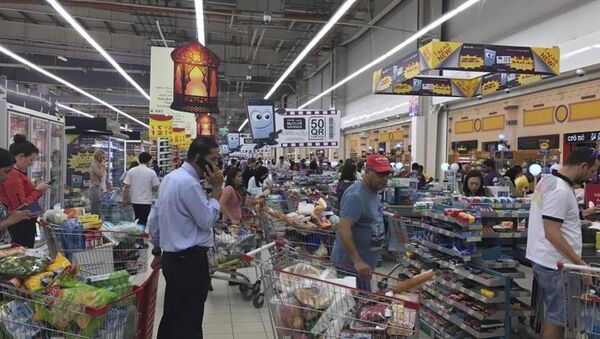 © AP Photo / Doha News
Subscribe
According to the Turkish economy minister, Turkey has sent 5,000 metric tons of foodstuffs to Qatar.

No Trucks, No Chickens: The Situation on Qatar’s Border With Saudi Arabia
MOSCOW (Sputnik) — Turkey has sent 5,000 metric tons of foodstuffs to Qatar amid the ongoing political and transport blockade of this Persian Gulf nation, initiated by a number of neighboring states that accuse Doha of providing state support to terrorist groups, Turkish Economy Minister Nihat Zeybekci said Saturday.

"Some 5,000 tons of foodstuff were transported to Qatar with 71 planes. The shipment will begin this weekend. Trucks are also on the way," Zeybekci said as quoted by the Hurriyet Daily News newspaper.

On June 5, Saudi Arabia, the United Arab Emirates, Bahrain and Egypt broke off diplomatic relations with Doha and stopped all communication with Qatar, accusing it of supporting terrorism and interfering in their internal affairs. Later, the Maldives, Mauritius, and Mauritania also announced the severance of diplomatic relations. Jordan and Djibouti reduced the level of their diplomatic missions in Qatar. Senegal, Niger and Chad summoned their ambassadors.

Erdogan, in particular, criticized the sanctions recently imposed against Qatar and said that such actions do not reflect the ideals of Islam.