Will June (or July) Bring the End of May? 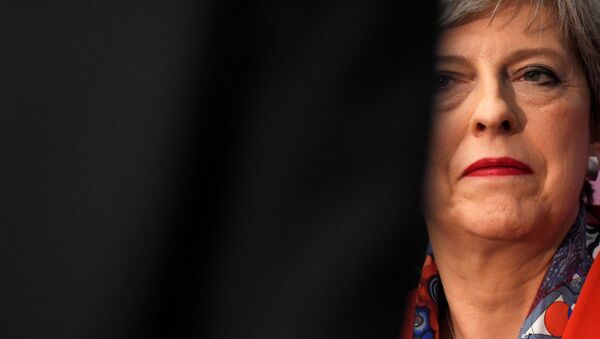 Neil Clark
All materials
How much longer can Theresa May survive as British Prime Minister? On 20th May she famously posted on her Facebook page: "the cold hard fact is that if I lose just six seats I will lose this election."

In the end, she lost more than six seats, but the far from "Strong-and-Stable" one still clings on at Number Ten — the female version of Kaufman & Hart's, The Man Who Came to Dinner.

On the morning after the June 8 poll, it was reported that May had struck a deal with the Democratic Unionist Party (DUP), which would allow her to keep her job after her party — against all the predictions of the Oh-So-Clever Elite Pundits Club — lost its majority in the House of Commons.

It was on this basis that May journeyed to Buckingham Palace to seek the HM Queen's permission to form a new government. But almost two weeks on and there's still no official deal with the Democratic Unionists. 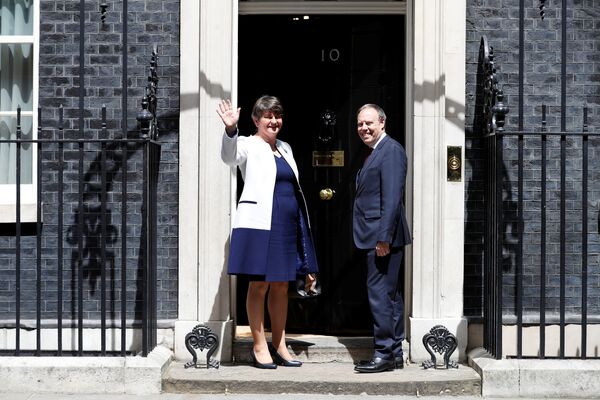 The leader of the Democratic Unionist Party (DUP), Arlene Foster, and the Deputy Leader Nigel Dodds, stand on the steps of 10 Downing Street before talks with Britain's Prime Minister Theresa May, in central London, Britain June 13, 2017
© REUTERS / Phil Noble

On Wednesday, June 21, it was reported that an agreement was in jeopardy over demands made by the DUP for £2 billion (US$2.53bn) investment in Northern Ireland. You can hardly blame the DUP for trying to extract their pound of flesh from a Prime Minister who is desperate for their support: it's their big chance and they must take it. But even if a deal is eventually agreed, May's position is still precarious. Her future may be "Orange" but it certainly isn't bright.

The smart-alecks who say that Jeremy Corbyn, for all his great campaigning, still did not "win" the election should consider what was in Wednesday's Queen's Speech. Or rather, what wasn't.

Those mean-hearted Tory manifesto pledges to means test winter-fuel payments for old age pensioners, to radically change the funding of social care (aka the "dementia tax") and to axe universal free school meals for four-to-seven year olds were all missing. As was the commitment to hold a free vote on bringing back fox-hunting.

Because you voted Labour, May has been forced to ditch the vote on bringing back fox hunting.
We saved Freddie the Fox! 🐺#QueensSpeech pic.twitter.com/eyYnx0cIq2

By stopping these controversial measures, Corbyn has already achieved a considerable victory and one that Tory-voting pensioners up and down the land (and foxes too) should be grateful for.

From @LordAshcroft: My new venture, the Ashcroft Model, shows a present likelihood of a Tory majority of up to 180 https://t.co/51gQVBZlKc

The Tories, who were licking their lips at the prospect of a majority of up to 180 seats, before the election, are in a proper bind. May, having needlessly thrown away a working majority by calling an election three years early, should, after such a disastrous miscalculation, have been asked to resign by now by the so-called men in grey suits. She stays on principally because the people behind the curtain — the money men who finance the party but who we hardly ever see — are terrified of a Jeremy Corbyn-led Labour government.

Queen's Speech Sees Embattled May Back Off From Key Manifesto Commitments
Better to have a "dead woman walking" Tory PM who can't get anything through Parliament without the opposition agreeing, than the nationalizing, rich-taxing, wealth-redistributing "Bearded One" at Number Ten. "Stop Corbyn!" remains The Establishment's number one priority.

After her calamitous campaign, May won't be allowed to fight another general election as Tory leader, but if she were to be toppled now — then the new party leader — be their name Davis, Hammond, Johnson, or Davidson — would have to go to the country to gain a mandate. And with a recent poll showing Labour having a lead of five per cent, that wouldn't be a particularly wise move for the Tories.

The "occupy the crease and hope something turns up" approach of the Tories is reminiscent of the strategy deployed Captain James Bigglesworth in that wonderfully exciting novel Biggles Foreign Legionnaire. Biggles and his chums are holed up in a castle in the remote Valley of the Tartars, and besieged by marauding Kurds.

"Can you see anyway out of this?" asks Ginger. "Frankly, no," answers Biggles. "The thing will just have to work itself out."

There doesn't seem to be a way out of the Tories from their current dilemma, but making a run for it by calling another election now is probably their worst option. Like Biggles and his comrades, they've got to stay in their fortress for as along as they can. Leave too soon and they'd get gunned down. 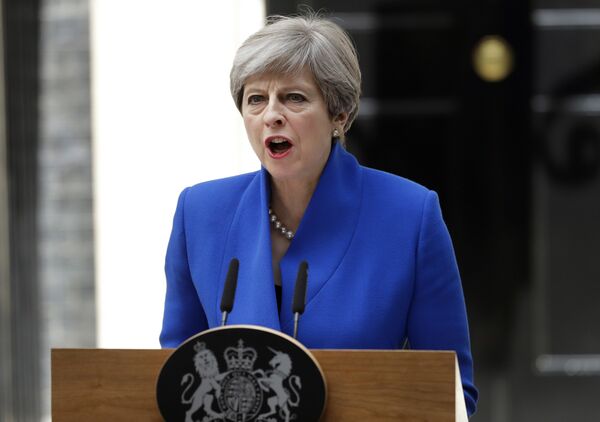 Brexit of course is another factor which could determine whether May stays days, weeks or months. A cross-party "Extreme Center" coalition of Blairites and Cameronites seems to be growing to pressurize May to opt for a "softer" Brexit. Writing in the Mail on Sunday, New Labour guru Lord Mandelson urged "mainstream" Labour MPs to "stand by" the "wounded" May if she "did the right thing for the country" and defied what he called the "Brexit head-bangers."

In the same paper, the billionaire global financier George Soros wrote: "If Theresa May wants to stay in power she has to change her approach. By approaching the negotiations (with the EU) in a conciliatory spirit, she could reach an agreement with the European Union on their agenda and agree to continue as a member of the single market for a long enough period to carry out all the legal work… She could then carry on leading a minority government, because nobody would want to take her place."

Ironically May's stated reason for calling an early election was to "strengthen" her hand at Brexit negotiations — in fact it has put her under much more pressure to compromise with the EU than before. All things considered, Theresa May is incredibly lucky to still be drawing her £150K (US$190K) Prime Ministerial salary.

What happened on June 8 was a defeat, an a humiliating one at that. Especially when you consider the Conservatives raised almost ten times more in election funding than Labour and had almost all the "mainstream" media on their side.

But paradoxically, May's clinging on to her job at least for a short while is doing Corbyn a huge favor. Her approval ratings continue to sink, while his continue to soar. In the two weeks since the election it has been Corbyn who has looked Prime Ministerial and not "Theresa Mayhem." Bookies now have Corbyn as 2-1 to be the next British Prime Minister. The odds of the next election being held in 2017 is 13-8, with 2018, 2-1.

Remember all those pundits who told us Corbyn was leading Labour to a catastrophe?! It turns out they had the wrong leader and the wrong party.