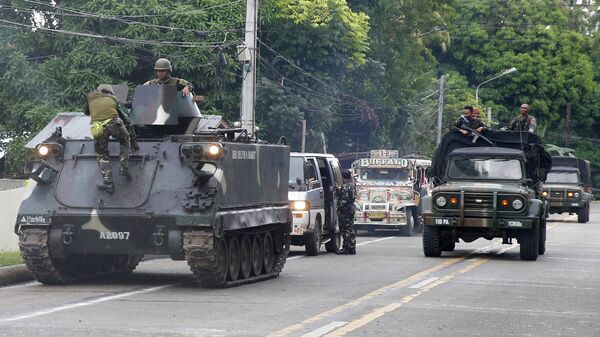 Washington is seeking to expand its presence in the Philippines over concerns about the growing influence of Daesh in the country. US lawmakers have expressed fears that the Islamists are attempting to get fighters into the region and pressed for urgent measures to address the situation.

However, in order to tackle this issue properly it is imperative to consider why the militants in the Philippines pledge allegiance to Daesh (a terror group banned around the world) even in regions where Muslims are in minority, like in central Mindanao.

Radio Sputnik discussed the issue with Joseph Franco, a research fellow with the S. Rajaratnam School of International Studies at Nanyang Technological University.

“For the past two decades or so there have been a few dozen Southeast Asian militants in Mindanao at any one time, but having the concern that they are going to transport the caliphate from Syria and Iraq to Mindanao, that is something that is quite farfetched frankly,” Franco said.

He further spoke about the reasons behind Daesh activities in the Philippines saying that when the US withdrew in 2014 from the Philippines they had a very limited objective, which was to prevent the establishment of a really strong terrorist presence in the islands off the coast of Basilan.

“They [the US] believed at that time that there objective had been met. But what is interesting is that all of the recent violence that is taking place in the Philippines is in central Mindanao away from where the US focus was,” the analyst said.

How US Special Forces Interference May Affect Fight Against Daesh in Philippines
According to him now the US can play a role in tackling terrorism in Mindanao by providing surveillance and intelligence, however, what remains unclear is how much Washington is willing to expand its support.

“There are still a lot of posts in the US Department of Defense which are unoccupied so there might be concerns regarding overexpansion into the region,” Franco said.

The analyst spoke about why the militants are suddenly pledging allegiance to the terror organizations in the Middle East. Moreover, he said that the Philippine government is to some degree responsible for the recent outbreaks of violence.

Franco said that the failure of the peace settlement, which was proposed back in 2014, and the fact that the government could not implement it, plays into the hands of the terrorists who use it to brainwash “young, angry men” into joining them.

According to him, the fanatics who are exploiting the situation in Mindanao are doing so because there is a “lack of governance in the region.”

“Mindanao is actually a Muslim minority region. People who pledge allegiance to IS [Daesh] are using the absence of government presence, the weakness of its presence. Marawi isn’t as prosperous as other urban cities in the region so decades of government neglect has led to this current outburst of violence,” Franco concluded.

Earlier, US intelligence officials noted that Daesh publicly accepted pledges from a number of formations in the country. They are now assessing whether any Southeast Asians who recently traveled to Iraq and Syria were involved in fighting in the Philippines.

Earlier, US Defense Secretary Jim Mattis told Congress that Washington should not have withdrawn a long-running US military operation from the country three years ago.

Over 500 US Special Forces were deployed in the Mindanao region from 2002 to 2014, advising and training Filipino forces against extremist groups.

Washington’s concerns come as nearly three hundred people died in fighting that erupted in the Philippine city of Mindanao. The jihadists involved in the assault are aligned with Daesh.