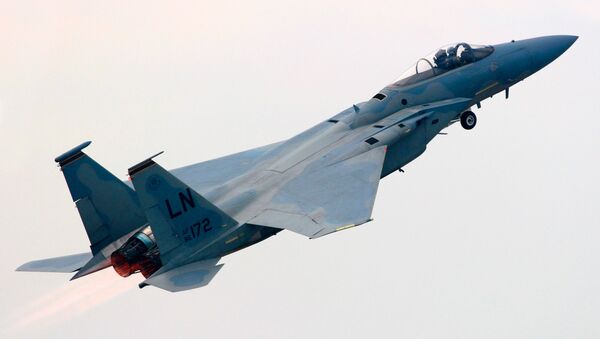 © Sputnik / Anton Denisov
/
Go to the photo bank
Subscribe
The United States has signed a major arms sale deal with Qatar, a week after President Donald Trump accused the Gulf nation of sponsoring terrorism. Experts suggested that the deal could make Washington more supportive towards Qatar amid the ongoing diplomatic crisis.

'If Qatar is a Terror State, Why is US Providing Them With High-End Fighters?'
On Wednesday, Bloomberg reported that the Pentagon had finalized the sale of 36 F-15QA Eagle fighter jets to Qatar for $12 billion. The Pentagon issued a press statement saying the sale would increase US-Qatari security cooperation.

Soon after, a major diplomatic crisis erupted between Qatar and other Gulf nations. Saudi Arabia, the United Arab Emirates, Bahrain and about a half-dozen other countries cut off diplomatic relations with Doha, accusing it of sponsoring terror groups and destabilizing the Middle East.

"The purchase of such expensive US weapons is not a priority for Qatar. The reason is that a US military base is stationed in the country. The base already guarantees security," the expert said.

Qatar Purchase of US Fighter Jets Not Escalating Diplomatic Row - Turkish FM
Commenting on the possible reasons behind the Qatar crisis, Egorchenkov suggested: "Possibly, the talks reached a stalemate and Washington had to put pressure over Doha."

He also suggested that with the deal signed it couldn’t be ruled out that the Trump administration will rein in its criticism of Qatar.

"I guess that Washington will soon make more friendly statements on Qatar and its role in the region. The US may also insist on the need to resolve the crisis in a peaceful way," Egorchenkov said.

"Trump is acting like a businessman. He wants to show that he can make good deals for the US," Nikolai Bobkin, a senior research fellow at the Center for American and Canadian Studies at the Russian Academy of Sciences, said.

US Ships Arrive in Qatar for Joint Exercise Amid Blockade
Experts reached by RT said that in the long run the US will try to preserve its current military cooperation with Qatar since Doha is very important for Washington’s policy in the Middle East.

Al Udeid Air Base in Qatar is the largest US military base in the Middle East. There are nearly 11,000 American troops at the base. It is also the headquarters of the US Central Command overseeing the Middle East, Middle Asia, the Persian Gulf and the western part of the Indian Ocean. It also oversees US aerial combat flights in Syria, Iraq and Afghanistan.

"Despite its differences with Saudi Arabia, Qatar continued to remain Washington’s ally and partner," Boris Dolgov, a senior expert at the Institute for Oriental Studies at the Russian Academy of Sciences, said.

He noted that amid the diplomatic crisis the US-Qatar deal is "sending a signal" to other Gulf nations, first of all Saudi Arabia, that Washington wants to resolve the conflict and still sees Doha as a partner.

According to Dolgov, despite Trump’s harsh statements on Qatar, Washington is interested to continue close bilateral cooperation.

Mattis said that the blockade of Qatar was a "very complex situation" and it was an area where common ground had to be found.

The day after the arms deal was signed, two US Navy vessels arrived in Doha for a joint exercise with the Qatari Navy.

"A deal between the United States and Qatar for F-15 fighter jets and a visit to Doha by two American warships on Thursday showed the vital military links Washington maintains with a country now in a dispute with several other Arab nations," AP journalist Jon Gambrell noted.

US Base in Qatar

UAE Ambassador to US Suggests Removing US Airbase From Qatar
Meanwhile, Qatar’s opponents in the conflict have called on the US to withdraw the military base, citing that the base prevents Washington from influencing Doha’s policy.

"If I want to be honest, I think the reason action hasn't been taken against Qatar is because of the air base. The air base is a very nice insurance policy against any additional pressure," UAE Ambassador to the US Yousef al-Otaiba was quoted as saying by The Military Times.

"Maybe someone in Congress should have a hearing and just say, you know, 'Should we consider moving it?' And maybe not moving the entire base. Maybe just distribute it to various countries so you don't have all your eggs in one basket," he added.

In turn, Bobkin suggested that the US is unlikely to do that.

Qatar Asks US to Partly Implement $21.1Bln Deal - State Dept.
"I think that the US will not relocate the air base. The current problem is contextual. They could move the base, but the next day the context may change. Moreover, the relocation of a military base is very expensive," the expert said.

His assumption was echoed by Egorchenkov who described such a scenario as "unrealistic."

"Such proposals are unrealistic because such expenses would not make sense. Al Udeid Air Base was moved to Qatar from Saudi Arabia 14 years ago and moving it back would make no sense. The US will not spend money on this," Egorchenkov said.