Ukraine Battalion Tactical Groups to Start Training at Starychi in 2018 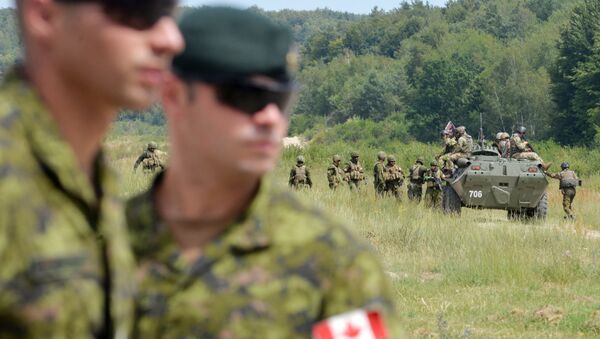 "In 2018, they are looking at shifting towards battalion tactical groups," Lubiniecki said on Wednesday.

Lubiniecki became the commander of the Canadian Armed Forces (CAF) Joint Task Force-Ukraine in March. He noted that the center’s current focus is on battalions, which allows about 600 soldiers to come through during a 55-day rotation. In 2018, their number can increase to 1,000.

At present, the center has no intent to start training entire brigades, Lubiniecki said. Nevertheless, it does provide training to their leadership.

"What they do touch on is staff training for the brigades, headquarters of the brigades’ staff," the commander noted.

The Ukrainian military is also planning to take over Starychi training center operations.

Lavrov Talks on Rise of Neo-Nazism in Ukraine With Canadian FM
"They do have a plan in place to grow their [trainers] numbers over the next 18 months to a point where they will be able to take the lead on all training delivery to the Ukrainian Armed Forces," Lubiniecki said.

Currently, more than a hundred Ukrainian soldiers work at the center as its full time staff. An increased number of local trainers will allow allies to step back and play more of a mentorship role, the commander noted.

"I am not sure if there will be a decrease to the number of allies operating at Starychi and possibly allies moving to another location," Lubiniecki added.

"The intent is not to decrease the number of training days for the rotational training units as a whole, but the intent is to provide the first two to three weeks at their home garrison," Lubiniecki said talking about the training teams’ work.

He explained that at present, the first days of the 55-day training cycle comprise of individual training, while the last 33-35 days are focused on collective training.

Mobile training teams ensure that the Ukrainian troops that arrive to the Starychi center have the first part of their training complete.

Lubiniecki said the size of the mobile training teams can vary from 4-5 to 20-30 soldiers, depending on the requests of the General Staff.

The commander added that the Ukrainian Armed Forces have made "great progress" so far, and the training they receive helps to save lives during operations.

In March, Ottawa extended its military training mission in Ukraine through the end of March 2019.

The Canadian military has trained more than 4450 Ukrainian soldiers to date overall, according to the Canadian Department of National Defense.