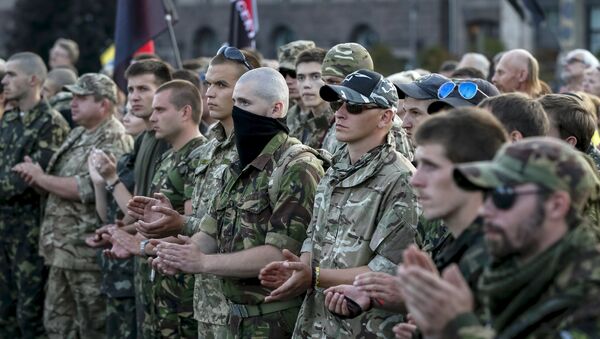 FAIRBANKS (Sputnik) — Lavrov explained that he discussed Russian-Canadian relationship with his Canadian counterpart during the informal dinner on Wednesday in Fairbanks, Alaska, where they both came to participate in the Arctic Council ministerial meeting.

"During the dinner the question of Ukraine came up, and how the crisis is negatively impacting the relations between Russia and the Western countries, we had a little polemics," Lavrov said on Thursday. "I have brought her attention to the issues of neo-Nazism and chauvinism manifestations that we are witnessing in Ukraine now, when it’s not the president or the prime minister, but the radicals who define the lifestyle in the neighboring area, close to us country."

Lavrov added that he gave Freeland an example of legislation concerning the state language.

Moscow Sees 'Linguistic Genocide' of Russian Language in Ukraine
"If adopted, it will require all Ukraine citizens, no matter what’s their preferred language of communication, whether that’s Russian, or Hungarian, or Romanian, or Polish, to use Ukrainian on all occasions," he said. “The fact that this is a discriminatory bill, the fact that it contradicts the European convention of the minorities languages."

The Foreign Minister noted that the Canadian minister was not aware of this legislation.

Lavrov said he promised to send this legislation to Freeland and will be waiting for her comment on that.

Freeland earlier on Thursday addressed the indigenous people of Russia who participated at the ministerial meeting in the Russian language.

Lavrov stressed that Russian has been mother tongue for many people in Ukraine and this can be soon changed.