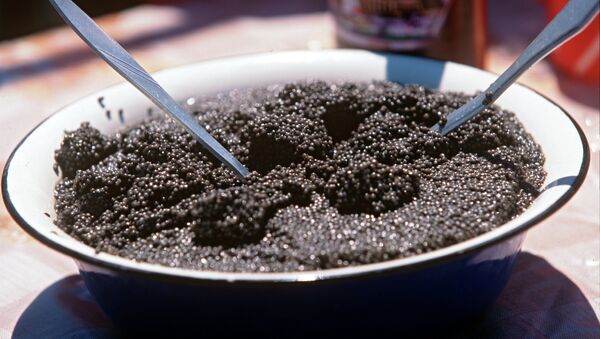 © Sputnik / Vladimir Vyatkin
/
Go to the mediabank
Subscribe
International
India
Africa
Russian Caviar House company which specializes in the sales of sturgeon caviar held a business presentation in the US capital of Washington, DC on Tuesday aimed at finding new partners and establishing new ties in the United States.

WASHINGTON (Sputnik) — General Director of company’s manufacturer, Diana Fish Trading LLC, Mikhail Novikov told Sputnik that while the company has been doing successful business in the United States for a number of years, it is determined to expand.

“We deliver our product to the United States for a while. Our first delivery took place in January 2011 but at the moment we are set to expand our work here,” Novikov said. “We are very interested in finding new buyers, and our goal is to grow by some 20 percent here.”

“We note that we have a deficit of our product, as all the product gets sold and we can sell a lot more,” he added.

Russia
Anti-Poaching Caviar Labeling Could Appear in Russia in 2018 - Fishery Agency
The business presentation at the Russian Cultural Center was attended by decision makers from the five-star hotels, restaurants, as well as private persons from New York, Los Angeles and the Washington area interested in establishing relations with Russia’s largest sturgeon caviar company. The guests also had a chance to try the “Black Gold.”

“Our focus is on both the western and eastern coasts of the country,” Novikov noted.

The general director shared that they have a number of meetings and negotiations scheduled during their visit to the United States.

Russian Caviar House, that occupies 80% of Russia's sturgeon caviar market, is the only legal export-supplier of Russian sturgeon caviar. It recently became the first international company selling caviar on the Chinese market.

For the last four years, the company has also been delivering caviar to the International Space Station.