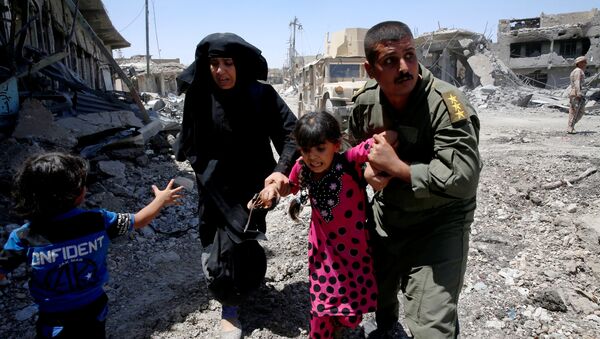 © REUTERS / Erik De Castro
Subscribe
The battle between US-led coalition forces against Daesh in West Mosul's Old City poses a considerable threat to civilians and civilian objects, an alliance of humanitarian organizations has said. The group is calling for all warring parties to cease using indiscriminate explosive weapons in the densely populated area.

In mid-February, Iraqi Security Forces supported by the US-led coalition, known as the Combined Joint Task Force began Operation Inherent Resolve, the offensive to retake West Mosul, a densely populated set of urban neighborhoods. The United Nations has estimated around 200,000 remain trapped in the two-square-kilometer area in West Mosul's Old City, encircled by Iraqi and US-led coalition forces in preparation for the area's discharge from Daesh clutches.

Between March and May alone Coalition dropped 12,300 munitions on Mosul with 1,000s more from ISF. Restraint needed https://t.co/vIdwB9WLYV

​The alliance — which includes Airwars, Amnesty International, Center for Civilians in Conflict. Human Rights First, Human Rights Watch, International Network on Explosive Weapons and War Child — moreover note over 12,000 munitions were used by the US-led coalition at Mosul between March and May alone, a total comprising airstrikes, rocket and artillery salvos, mortar attacks and helicopter actions. In addition, thousands more munitions were released by Iraqi air and ground forces, "at times with little apparent discrimination."

The onslaught comes despite the city still being home to hundreds of thousands of trapped civilians.

"The result of this ferocious bombardment on a densely populated city has been inevitable, with thousands of Moslawis reported killed in Coalition, Iraqi government and Daesh actions. Determining responsibility is proving particularly challenging, given the high number of munitions involved. We urge both Coalition and Iraqi forces immediately end the use of wide area effect and indiscriminate munitions in Mosul, in order to save lives," said Airwars director Chris Wood.

​On May 25, anti-Daesh forces dropped leaflets urging civilians to immediately leave areas under the control of the self-styled "Islamic State" — the group demands coalition forces take all feasible precautions to minimize harm when carrying out attacks, and ensure civilians can safely evacuate the Old City and get humanitarian assistance both inside and outside the besieged area. With the offensive to take West Mosul entering its 109th day June 8, the situation for entrapped civilians is growing ever-perilous. Those fleeing Mosul have told humanitarian and human rights organizations markets are being emptied of food, with civilians subsisting on little other than wheat and rainwater. 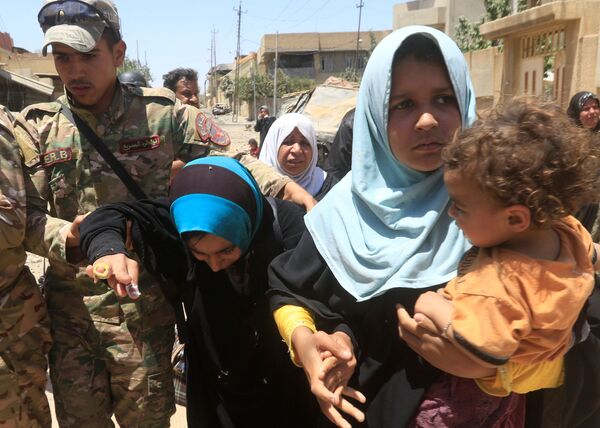 Escalating civilian casualties from aerial operations have heightened concerns regarding coalition and Iraqi airstrikes. The use of explosive weapons with wide-area effects such as air-dropped bombs of 500 pounds and above in densely populated civilian areas may result in civilian casualties and damage to civilian objects in excess of the anticipated military objectives of the strikes.

Such disproportionate military attacks are prohibited under international humanitarian law.

​Iraqi forces have also been launching locally fabricated rockets, commonly known as improvised rocket-assisted munitions, into West Mosul — such weapons are highly imprecise, and can be considered unlawfully indiscriminate if used in heavily populated areas.

Many newly displaced citizens of West Mosul have told humanitarian and human rights organizations that Daesh fighters forced them and their families to move with them up to three times, packing large numbers of families into small neighborhoods still under their control. They also witnessed fighters summarily killing dozens of men as punishment as they and their families tried to flee the group's clutches. 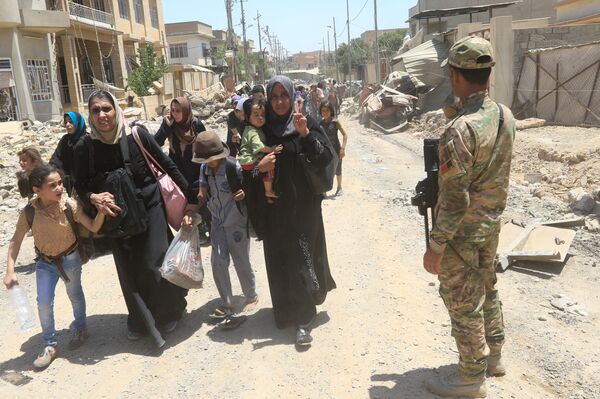 As the fighting has intensified, Daesh's use of civilians as shields has increased, and coalition forces should use all available means to verify the presence and location of civilians in the immediate vicinity of any fighters or military objectives targeted.

In December 2016, US forces made procedural changes in their targeting that may increase the likelihood of civilian casualties.

​Weapons such as mortars and multi-barrel rocket launchers are fundamentally inaccurate, rendering discriminating between civilians and combat targets virtually impossible. As area-fire weapons, when used in densely populated areas they are prone to unlawful indiscriminate use.

The coalition says Iraqi and US-led coalition must adhere by the laws of war, which require belligerents in a conflict take constant care during military operations to spare civilians, and take all feasible precautions to avoid or minimize the loss of civilian life and damage to civilian objects. When used in populated areas, munitions with large payloads of high explosives often have a wide-area destructive effect, almost inevitably resulting in civilian casualties.

The alliance reminds the US-led coalition that individuals who commit serious violations of the laws of war deliberately or recklessly are classed as war criminals. Individuals also may be held criminally liable for attempting to commit a war crime, as well as assisting in, facilitating, aiding, or abetting a war crime.

Despite the campaigners' concerns, others are convinced civilian casualties are a savage yet necessary price to pay for the eradication of Daesh from Iraqi and Syrian territory. Mohammed al-Azdee, Assistant Professor at the University of Bridgeport, says the group is a "tumor" — and must be "annihilated" at all costs. While not an advocate of wars, he sees no other way of dealing with such an enemy.

"Any civilian casualties created by coalition strikes are not the fault of the coalition, or the individual nations in the coalition — Daesh is responsible for any civilians that die as a result of coalition actions. It's because of them there will be civilian casualties. Daesh has taken civilians as hostages, and treats them as human shields. They targeted innocent civilians from countries all other the world. Mercy is a word that does not exist in Daesh's dictionary," Mr. al-Azdee told Sputnik.