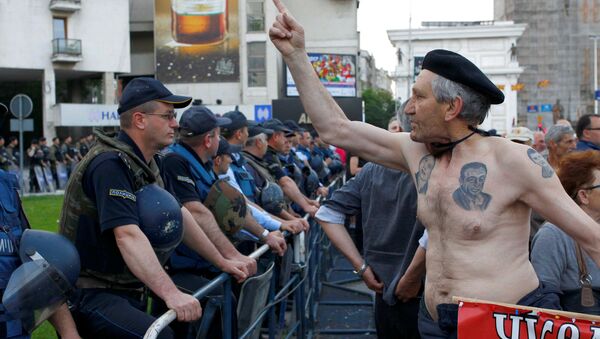 The Organized Crime & Corruption Reporting Project has issued a report accusing Russian secret services and diplomats of meddling in Macedonia's internal affairs. The only problem is that the OCCRP, ostensibly charged with fighting crime and corruption in Eastern Europe and Latin America, gets its funding from the US State Dept and George Soros.

However, observers point out that the extracts from Atanasovski's supposed briefing used in the report bear no signs of authenticity, apart from having been written in the Macedonian language.

Trust but Verify: Putin Asked if Russia Could Join NATO to Gauge Bloc Intentions
The OCCRP also quotes another document, which alleges that Russian Ambassador to Macedonia Oleg Shcherbak recently told a senior Macedonian Foreign Ministry official that Moscow was looking to "create a strip of militarily neutral countries" in the Balkans, with Macedonia, Montenegro, Bosnia and Serbia included in the project. Again, the group could not confirm the authenticity of that document.

According to the OCCRP report, the ultimate goal of Russian actions in Macedonia is to make the country dependent on Russian policy, and to "isolate" it from Western influence through the use of soft power. Russia, the report says, uses a variety of methods to promote its goals. This includes using levers of cultural influence to promote the idea of pan-Slavism and unity in the Orthodox faith. It also includes using Russian-Macedonian friendship associations and the Russian cultural center in Skopje.

The report also makes accusations against Serbian intelligence, which it says also operates in Macedonia to undermine the possible convergence between Skopje and the West.

The OCCRP is, by its own admission, supported by the United States Agency for International Development (USAID), the US State Department, the Swiss Confederation, and the George Soros' Open Society Foundations.

With this fact in mind, Pyotr Iskenderov, a senior researcher at the Russian Academy of Sciences' Institute of Slavic Studies, suggested that the report was really just part of a broader effort by the European Union and the United States to create a negative image of Russia in the Balkans, in turn strengthening their own positions politically and militarily.

'Former Terrorists Come to Power' in This Balkan Country
Iskenderov emphasized that in Macedonia itself, "no one seriously believes that Russia could interfere in their domestic affairs, especially given the fact that relations between the two countries have not developed very actively in recent years due to the internal political instability facing the Balkan country."

What's more, the expert said, there is little reason for Russia to even try to influence the country's major political forces, since as far as foreign policy is concerned, both the ruling coalition and the opposition have positions that are broadly similar.

Instead, Iskenderov said, the idea of Russian interference in other countries' internal affairs fits into a narrative which has become quite popular in Western countries. Accordingly, he noted, "the EU first and foremost, and certain sections of the US establishment, need to create a negative image of Russia in order to strengthen its own position in the Balkans."

The academic also recalled that numerous analytical articles have appeared in leading Western media in recent months showing fading Western interest toward the Balkans, and saying that the lack of prospects for joining the EU in the near future may drive Balkan nations into Russia's arms.

"In this context, studies and publications [like the OCCRP report] are designed to reverse this situation – to draw attention to this 'problem' among the Western public (even if it is rather contrived) and to try to get more money out of the relevant political and financial structures in the EU for projects relating to the Balkans," the expert said.

Top US Think Tank Says NATO Must Swallow Up Georgia, Macedonia, Bosnia & Ukraine
For his part, Oleg Morozov, a member of the Russian Senate Committee on Foreign Affairs, stated bluntly that allegations of Russian meddling in Macedonia have absolutely no basis in fact, and everyone knows it.

"For all the importance Russia places in Macedonia and the Balkans as a whole, it is difficult to imagine Moscow getting involved in Macedonia's [internal] affairs, risking its reputation in doing so," Morosov stressed. "Such accusations amount to political conspiracy theories, and are not based on any real facts," he added.