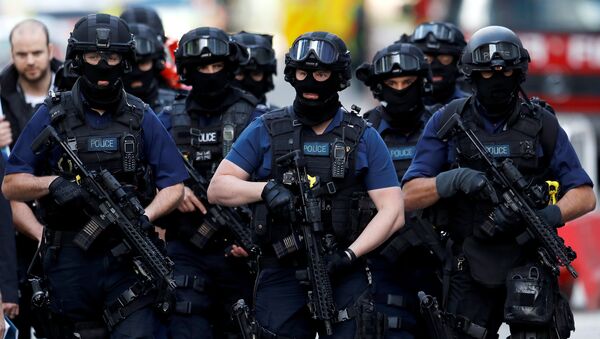 Seven people have died and 48 were injured after three men drove a van across London Bridge, mowing down dozens of people before running into the nearby area of Borough Market, stabbing people at random. Within eight minutes all three were shot dead by police, who have been praised for their quick reaction.

Although the attackers were shot dead by police within eight minutes of the first call, it is the third terrorist attack in three months, which some security experts says shows that the UK Government's 'Prevent' strategy is not working.

The 'Prevent' strategy was designed to stop people from being drawn into terrorism and ensure that they are given appropriate advice and support by allowing police and intelligence agencies to work with local groups and institutions where there are risks of radicalization.

"I think in the wake of [UK Prime Minister Theresa May's comment [following the attack] that 'enough is enough' I think the intonation that the Prevent strategy needs to be completely refreshed and redone would make an awful lot of sense," UK security expert, Will Geddes, founder of ICP Group told Sputnik.

"One has to consider that there is a lifecycle for a terrorist. From where they are potentially recruited from and those that are within certain susceptible communities and how they can be identified. Secondly, how that radicalization can be communicated to them and what measures we can take to protect those that are susceptible," he said.

Geddes told Sputnik that the emphasis should move from just using telephone tip-offs from families, institutions or members of the public, to supporting a new anonymous terrorist whistleblower intelligence network.

"It's about supporting the community and even friends and family to feel confident enough to be able to communicate to the authorities and to a suitably reinforced anonymous whistleblower capability — probably more on a personalized level, rather than just a telephone level alone. It will help interject at any particular stage in that lifecycle before it materializes into an attack," Geddes told Sputnik.

The latest attack follows the one, May 22, when a suicide bomber detonated his explosive at Manchester Arena, in the north of England, following a performance by American singer Ariana Grande, killing 23 and injuring more than 100.  The attacker was identified as Salman Ramadan Abedi, a 22-year-old British Muslim who detonated a shrapnel-laden improvised explosive device at the exit of the arena after the event. Twenty-three adults and children, including Abedi, were killed and 116 were injured, 23 critically.

Police and UK security agency MI5 are carrying out an inquiry into whether or not information about Abedi's previous behavior has been overlooked, although the authorities have admitted he was not reported to them under the 'Prevent' program.

Five people died and 50 were injured after an attacker named by the police as Khalid Masood — born Adrian Russell Ajao — drove a car across Westminster Bridge in London, March 22, mowing down pedestrians before crashing to the railings of the Houses of Parliament. He then ran through a gate, where he was accosted by two policemen, stabbing one of them to death. The assailant was then shot dead by police firearms officers.

Geddes told Sputnik that terrorists had turned their attention to so-called 'soft targets' — public areas where a large number of people could be attacked.

"The ability to protect soft targets like [London Bridge and Borough Market] is virtually impossible — other than installing certain physical security barriers or protective measures that would prevent a vehicle mounting the pavement," Geddes told Sputnik.

"Ultimately, where soft targets were not combatants will be targeted, the only way you can intercept or prevent [terrorism] will be through intelligence-gathering. Other means are incredibly difficult," he said.

Geddes told Sputnik that — despite criticism of the 'Prevent' program, the police and security response to the London Bridge and Borough Markets attack — which saw all three assailants shot dead within eight minutes — shows how effective policing is in London.

"The response was literally evidence not only of the degree and level of preparedness, but also the fact we are world-beating when it comes to counterterrorism," Geddes told Sputnik.