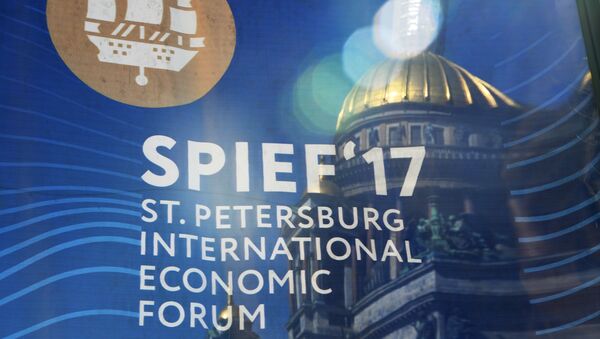 Denis Bolotsky
All materialsWrite to the author
Low temperatures, occasional thunderstorms and even some snow: the weather brought unpleasant surprises for the participants of the 2017 St. Petersburg International Economic Forum. But inside the ExpoForum convention center, where the event was held, the climate was totally different.

For the second time in a row, the St. Petersburg International Economic Forum was held outside the city's historic center. As a result, most Forum-related traffic moved further away from Russia's northern capital, making it easy for the participants to reach its historic sites – museums, churches and cathedrals, in their spare time.

Some guests of the forum, like the participants of the Monaco-St. Petersburg rare vehicles rally, had a green light on their final stretch of journey to Russia. Members of the European dynasties and aristocracy drove their exotic vintage cars from Monaco all the way to the rally's finishing line at the SPIEF main venue.

Narendra Modi was sharing his experiences with his 30 million Twitter audience.

Russia
MC-21, Russia's Answer to Boeing, Performs Its Maiden Flight (PHOTO, VIDEO)
India's pavilion was one of the largest at the SPIEF. The country's government launched a major national program designed to facilitate investment, foster innovation and enhance skill development. Together with Russian partners, the Indians are working on projects in industry, transportation, trade and agriculture, and St. Petersburg Forum is another chance for them to discuss their plans.

Indian partners expressed interest in one of Russia's latest projects – the Irkut MC-21 civilian airliner, which made its maiden flight in the end of May. The majority of the plane;s parts were made in Russia. Rostec Corporation produced the avionics and other parts.

The prototype was tested using foreign engines, but Rostec CEO Sergey Chemezov told Sputnik that they would be replaced by Russian ones, built by a Rostec subsidiary – United Engine Corporation: "We're currently testing our own PD-14 engines. The tests will be finished by the end of this year and next year we're planning to launch mass production."

Rostec CEO Chemezov about Russia's MC-21 plane:"We never made anything like this before. Glad it happened. We made avionics and other parts" pic.twitter.com/1RD56y2Lkv

Russia
Russia Reveals What the '21' in Its New MC-21 Airliner Really Stands For
Several years ago the US and European Union imposed economic sanctions on Russia over the situation in Ukraine. For several years Barack Obama's administration has been warning large US companies not to send their representatives to St. Petersburg Economic Forum.

Nevertheless, judging by this year's list of SPIEF participants and official partners, not to mention the number of deals signed during the event, Russia is far from international isolation. Rosneft and BP signed an agreement on cooperation in the gas industry. Gazprom and Royal Dutch Shell agreed on the main terms of their joint Baltic LNG project. Gazprom also struck a deal with Italy's Edison and Greece's DAPA on cooperation in creating a southern route for Russian gas supplies to Europe.

Initially, the SPIEF was intended to become the analog of the World Economic Forum. It was first held in 1997 and attended by 1,500 participants. The forum has recently developed from a domestic event into a respected and highly representative international platform for discussing key economic issues in Russia and abroad.