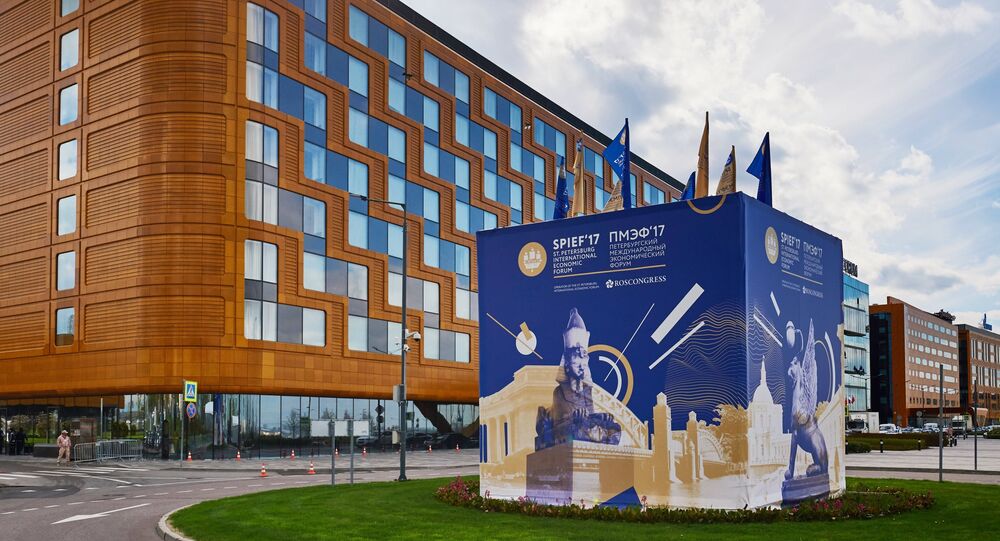 The 21st annual International Economic Forum in Russia’s city of St. Petersburg, abbreviated as SPIEF, kicks off on Thursday at the ExpoForum Convention and Exhibition Center and will last for three days.

MOSCOW (Sputnik) – The SPIEF is a leading international business event and platform for discussing key economic issues in Russia, emerging economies and the world as a whole. The forum’s attendance is estimated at nearly 10,000 participants from Russia and other countries, including heads of state and government, corporate leaders, as well as representatives from the research and media communities and civil society institutions.

The concept for the forum was proposed by the Federation Council, which is the upper house of Russia’s parliament, and the Commonwealth of Independent State (CIS) Inter-Parliamentary Assembly. In May 1997, it was approved by Russia’s then-President Boris Yeltsin.

Initially, the forum was intended to become the analog of the World Economic Forum (WEF) in Davos for the CIS countries, focused on the economic and geopolitical development of the member states.

© REUTERS / Maxim Shemetov
Russia-US Business Contacts Uninfluenced by Politics - RDIF CEO
The first SPIEF was held on June 18−20, 1997. Over 1,500 people attended the event, including heads of state and government from the CIS countries and Russian regions, representatives of banks and financial organizations, businesspeople and public figures. They discussed ways to attract investment and boost economic cooperation between Russia and other CIS countries with the global leaders’ financial and industrial companies.

In 1998, Yeltsin signed a directive making the St. Petersburg forum an annual event. In 2001, the forum was declared the main economic event in the CIS. From 2005, it has been held under the auspices of and attended by the president of Russia.

© Sputnik / Alexandr Piragis
SPIEF to Show What Russian Far East Has to Offer for Cooperation With Asia Pacific
From 2014, the post of chair of the SPIEF Organizing Committee was turned over to Deputy Prime Minister and Head of the Government Executive Office Sergei Prikhodko.

SPIEF has recently developed from a domestic event into a respected and highly representative international platform.

The 20th St. Petersburg forum in 2016 was attended by over 12,000 participants from 133 countries, including over 40 Russian and 60 foreign dignitaries, and CEOs from some 600 Russian and 300 foreign corporations. The SPIEF 2016 program included over 300 events, such as BRICS, SCO and Business 20 (B20) business council sessions, a meeting of the Valdai International Discussion Club, awards ceremonies for the Global Energy Prize and Development Award, a summit meeting of energy companies, and much more. The key event in 2016 was a panel session titled Capitalizing on the New Global Economic Reality, which was broadcast by 86 international television networks, including SPIEF sponsors CNBC, Bloomberg, CCTV and CNN. As many as 356 agreements valued at over 1 trillion rubles (approximately $17.6 billion) were signed at the forum.

The cultural program of SPIEF 2016 included 67 cultural and sports events such as theatrical performances, concerts, exhibitions, hockey and tennis tournaments, a charity race and much more.

In 2017, the SPIEF is held under the slogan "Achieving a New Balance in the Global Economic Arena."