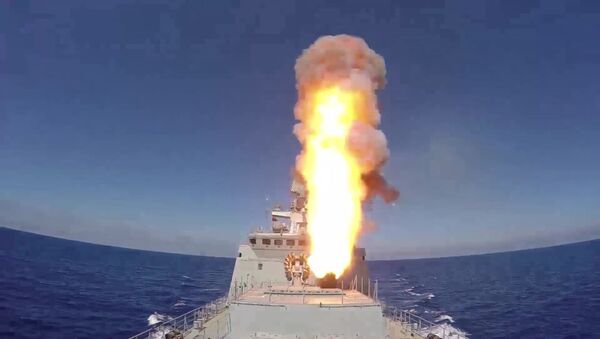 Russia has carried out airstrikes, sending its cutting-edge Kalibr cruise missiles against Daesh targets near the ancient city of Palmyra to prevent the terrorist group from creating obstacles in the way of Damascus liberating Deir ez-Zor, defense analyst Ivan Konovalov told Radio Sputnik.

"The war goes on. Clearly there are still many militants fighting under Daesh banners. They have launched desperate counterattacks. They have tried to capture Deir ez-Zor, which has been partially controlled by the Syrian Arab Army (SAA) for three years," he said.

Konovalov, who heads the Center for the Study of Strategic Trends, pointed to Palmyra's strategic location, particularly when it comes to liberating Deir ez-Zor.

"It is Palmyra that the SAA is planning to use to send its main force to lift the blockade of Deir ez-Zor and push Daesh out of the city," he said. "Daesh understands that they are likely to lose Raqqa, their de facto capital. They are determined to turn Deir ez-Zor into their new stronghold. This is why the areas around Palmyra are one of the most complex operational theaters. Using Kalibr missiles [to hit targets located] in this region was a reasonable move," the analyst said.

Earlier, on Tuesday, the Admiral Essen frigate and the Project 636 Varshavyanka submarine Krasnodar launched four Kalibr cruise missiles from the eastern Mediterranean, hitting all intended targets to the east of Palmyra. The Russian Ministry of Defense announced that the Russian Navy destroyed Daesh hideouts, housing heavy military equipment. An unconfirmed number of militants were eliminated in the successful operation.