NATO's Commitments: What About Promises to Russia? 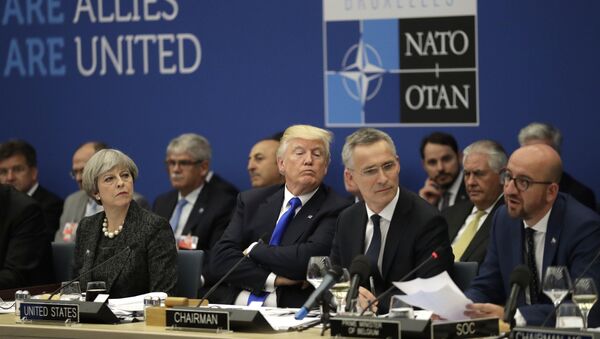 Dmitry Babich
All materials
The last few days have seen so many events connected to NATO and the leaders of the alliance’s member countries, that one can easily get confused.

As NATO Decides to Talk to Russia, the Question Remains, What About?
NATO’s summit in Brussels on May 25, a session of NATO’s Parliamentary Assembly on May 29 in Tbilisi (Georgia), and then also the G7’s summit in Sicily, with just about all the same NATO-related faces dominating the television screens. Some observers even suspected that the diversity of geography was meant to camouflage the dearth of ideas.

In fact, there were plenty of ideas, especially on Russia, which was viewed as one of the main threats to the alliance. The urgency of this “threat” vacillated between the “bronze” in Brussels (where it was described as the third among the greatest threats) to the “gold” in Tbilisi (where delegates from Ukraine and NATO member countries even discussed a nuclear threat emanating from Russia’s Crimea).

So, NATO’s dearth of ideas on mass migration and terrorism (real threats) was compensated by a flood of suggestions on Russia (an imagined threat). The problem was not quantity, but quality: some of the solutions to the “Russia problem” were of questionable quality (some would even say – of questionable sanity).

And almost all of these ideas demonstrated what one could call collective amnesia: they were in complete contradiction to the statements made before by NATO’s leaders. The irony of the moment was that some of the earlier pledges of friendship to Russia were made by those same people whom we see now in attendance of the “imminent Russian aggression” in Brussels.

James 'Mad Dog' Mattis Says Moscow Knows NATO 'Not a Threat' to Russia
US President Trump almost “normalized” himself in the eyes of his suspicious European allies by his vows to fight terrorism, illegal migration and “threats from” Russia (in that order). Obviously, he just erased from his memory his pledges to “get along remarkably well” with Russia and its president Putin, made during his presidential campaign in 2016. Trumps seems to have dumped that promise even before his first meeting with Vladimir Putin.

Donald Tusk, the head of the European Council and thus formally the top official in the EU, kept nodding and smiling while hearing from Trump about the “Russia threat”– even though just a few weeks ago that same Tusk called that same Trump “the biggest threat to European security in the 60 years of the existence of the community of European nations.” The reason? Those already cited friendly words of Trump about Russia’s president Putin. Even though Trump never met Putin in his whole life, Tusk and his colleagues in the EU not just suspected a Putin-Trump “collusion,” but spoke about it as if it was a fact.

In a society with a minimal amount of institutional memory, it would make sense for Tusk to apologize to Trump (Tusk’s remarks proved to be pure slander, since Trump shows no signs of “surrendering” Europe to Putin, as Tusk predicted).

If the EU were a responsible alliance, Tusk would have to apologize to Putin too (after all, the EU’s official documents never declared Russia an enemy to such an extent that mere possibility of friendship between a foreign leader and Russia’s president would present a threat to European security).

World
Trump's NATO Pressure: 'US Needs Formidable Bloc in Case of War With China'
By the way, Tusk’s insulting behavior was supported by other leaders of the EU’s “grandees” during their summit in Malta in February this year. So, some of the G7’s leaders had ample opportunity to apologize or at least correct in Sicily for what they said in Malta.

However, no such moves were made. Instead, all the ultraliberal press in Europe and the US kept talking about Trump’s rudeness in requiring each NATO’s member to spend 2 percent of its GDP on defense.

The truth is that Europe has been quickly remilitarizing itself against Russia, so its attempts to present Trump as “forcing” this remilitarization on it look like an attempt to mislead the public.

Having already earmarked the new defense expenses, the European leaders are shifting the responsibility for them away from themselves to Donald Trump.

According to Stockholm International Peace Research Institute (SIPRI), for example, Latvia made a 44 percent jump in its military spending in 2015-2016 (without any Trump in sight) and now spends $407 million on it – a huge some for a nation of less than 2 million. It is followed by Lithuania with a jump of 35 percent ($636 million). 2016 alone saw a growth of 2.4 percent of defense expenses for the Central European countries overall.

Geopolitical Divorce: EU to Choose Between US Blackmail and Chinese Investments
An Internet resource EUObserver, which is completely loyal to the European Union, quotes a SIPRI researcher Siemon Wezeman as saying that all of these increases are taking place despite the already existing military superiority of the EU over Russia: “Russia’s spending in 2016 was only 27 percent of the combined total of European NATO members,” Wezeman is quoted as saying.

So, when Trump is lamenting the fact that NATO hasn’t got all the $190 billion worth batch of weapons it could have if all members spent their 2 percent on defense, he is being only SEEMINGLY resisted by the European leaders. In fact, they also want to spend this money on arms.

During the past “NATO week”, Trump’s European partners reaffirmed their 2 percent pledge until the year 2024, but in some spheres they went further than Trump.

The European members of NATO confirmed the much more explosive promises of NATO’s membership for Georgia and Ukraine. (First made at NATO’s summit of 2008 in Bucharest, these pledges were reiterated at the recent Parliamentary Assembly of NATO in Tbilisi.)

As for Trump’s role, he was not lambasted by the EU’s leaders for militarism, but, on the contrary, for his reluctance to promise activating NATO’s Article 5 (obliging all members to fight in case of an attack against one member) for just about all of Russia’s hostile neighbors.

Last week, the NATO new “mixed” battalions continued operations  not only in Poland, but also in Estonia (at a bus drive distance from St.Petersburg), with 800 Brits and 400 French openly preparing to fend off “a Russian aggression.”

Remembering all their pledges to the nationalist regimes in the Baltics, Georgia and Ukraine, the NATO’s leaders have forgotten many other, more important promises which they had made to Russia.

What about the Western mantras repeated during NATO’s expansions in 1999 and 2004 that “no NATO expansion will be directed against Russia”?

(By the way, these promises were reflected in the Founding Act on Relations Between NATO and Russia, signed in 1997, which the current Polish foreign minister openly said he would not like to comply with.)

Russia Has Little Reason to Trust NATO After It Absorbed Whole of Eastern Europe
How do numerous promises jive with numerous current NATO’s military exercises in Poland, Latvia, Estonia, Lithuania and Rumania – exercises during which Russia is invariably cited as the “presumed enemy’? Why did the recent air force drills named Arctic Challenge Exercise — 2017 (ACE-2017) – why did they include a point on “overcoming the enemy’s air defense capability” by about 100 mostly Nordic military jets? How can that be useful for the “purely defensive alliance” of NATO? Interestingly, ACE-2017 was attended not just by NATO members (with the host being Norway, a member of NATO), but also by “neutral” Sweden, Finland and Switzerland, which also sent their airplanes.

In this situation, it is indeed useless to mention some older promises – for example, the German postwar leaders’ promise that “nothing but peace will ever come from the German soil.” (Hundreds of German tanks now rolling through Polish territories in imitations of a future tank duel with Russia – Willy Brandt or even Helmuth Kohl would probably blush at this reality of the present day.) Or the promise of the administrations of Ronald Reagan and George W.H.Bush that NATO would not expand to the east if only Gorbachev lets Germany reunite peacefully. These all were words, words, words…

Not even 2 percent of them were truth.