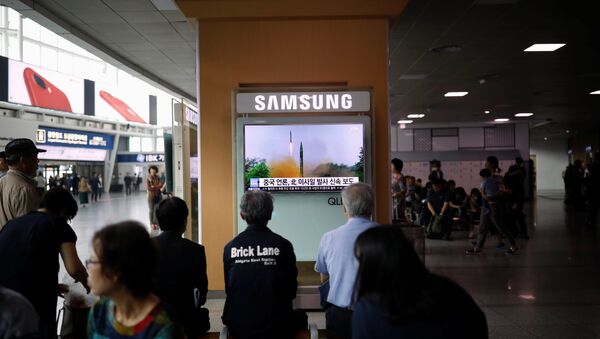 © REUTERS / Kim Hong-Ji
Subscribe
The South Korean military has detected what is believed to be a missile launch by North Korea, local media reported on Monday. It was later confirmed by the US as a short-range ballistic missile.

According to the Yonhap New agency, the South Korean military detected a missile launch conducted by North Korea on Monday.

Seoul's Joint Chief of Staff (JCS) said that the launch was conducted from the area near the North Korean city of Wonsan that is located on the country's east coast. The military added that the projectile had covered some 450 kilometers (280 miles) before falling into the Sea of Japan.

“The missile, which was fired from the eastern coast of North Korea, has fallen in the exclusive economic zone of Japan. It is necessary to ensure the security of Japanese ships and planes,” Suga said at a press conference on Monday.

In the wake of the launch, South Korean President Moon Jae-in ordered to convene the meeting of the country's national security council.

DPRK on ‘Inevitable’ Path to Launching Nuclear Missile Against US - Official
A White House official said after the launch that US President Trump was made aware of the latest actions of Pyongyang.

"The United States government is aware. The president [Donald Trump] has been briefed," a spokesperson told reporters.

US media reported earlier that Trump might order a strike against North Korea in light of the latter's military activities.

On Saturday, media reports emerged saying that the US aircraft carrier Nimitz was sent to the Asia-Pacific region to join two other American strike groups that had been already deployed near the shores of the Korean Peninsula.

US Defense Secretary James Mattis said on Sunday that possible war with North Korea would be a disaster affecting all the nearby countries in the region, including China and Russia. He stressed that the fact that Pyongyang possesses "hundreds of artillery cannons and rocket launchers" within range of South Korean capital of Seoul would make the potential conflict particularly dangerous.

The most recent launch of North Korean ballistic missile took place on May 21. The ground-to-ground missile reportedly flew some 500 kilometers (310 miles) before falling into the Sea of Japan short of reaching Japan’s exclusive economic zone.