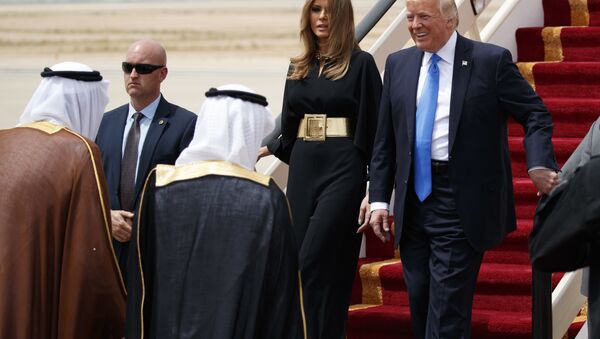 MOSCOW (Sputnik) — Shamkhani claimed the Arab monarchy was sending young people to conflict zones to radicalize and convert them to terrorists.

"Iran has been fighting against terrorism for already 40 years… The US citizens got to know what terrorism is after September 11, 2001. However, Trump made his first visit to the country which generates terrorists like a factory… Terrorists in Syria and Iraq are instruments that serve to promote Washington's policy," Shamkhani told Russia's Kommersant newspaper.

Trump Ignores 'Saudis' Major Role in Sunni Terrorism' in Return for Oil Deals
Shamkhani noted that public dissatisfaction with the hereditary transmission of power and Wahhabi mentality, among other issues, encouraged radicalization of young people.

Tehran will not agree on the participation of the United States' forces in guarding de-escalation zones in Syria, Shamkhani added.

"No. Syria has government, only it can decide who has right to be on their territory," Shamkhani said answering the question on Iran's agreement on the participation of the United States in guarding the de-escalations zones.

According to Shamkani, Syrian authorities do not want to see the "Americans supporting terrorism and destabilizing Syria." He added Tehran was ready to consider the deployment of military troops for guarding the perimeter of the de-escalation zones.

Trump's Support of Saudi Arabia Predicted to 'Backfire' on US
Iran, alongside Russia and Turkey, is a guarantor of the ceasefire regime in Syria. At the latest Astana talks on Syria which took place on May 3-4, the three ceasefire guarantor states signed a memorandum on the establishment of four safe zones in Syria. It came into force on May 6.

On Saturday, Trump flew to Saudi Arabia, the first country he visited as the president of the United States. The trip also took in Israel and the Palestinian lands, Brussels, the Vatican, and will end in Sicily where he will attend a G7 summit of industrialized nations on Friday.